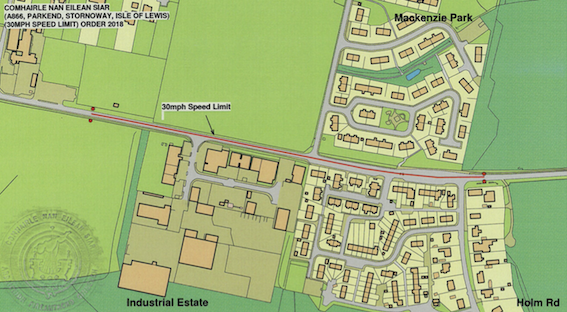 Motorists using the road between Stornoway and the Airport and Point have been expressing surprise at the sudden appearance of a 30mph limit at Parkend – where, until September 10th, a 40 mph order was in force.

No publicity was given to the implementation of the change, where the existing 40 mph signs were either removed or replaced, although motorists report police checking speeds in the area recently.

“The effect of the Order will be to prohibit any person from driving or causing or permitting to be driven, any vehicles on the A866 road at Parkend from a point 122m east of the East Street junction to a point 25m east of the Holm junction , a distance of approximately 500m or thereby at a speed exceeding 30mph.

“Full details of these proposals are in the Draft Order which, together with a map showing the length of the road affected and a statement of the Comhairle’s reasons for proposing to make the Order may be examined on the Comhairle’s website from 24 January 2018.”   Objections were invited to be received by Friday 23 February.

The order was finally signed on August 23rd and came into force on September 10.  Despite this being a major road for Island drivers, no media release was received by welovestornoway.com

Commenting on the Facebook community page, Western Isles Noticeboard, Richard Cooke said: “Yeah, it caught me be surprise last Wednesday. Long overdue for such a built-up area with kids. But, yeah, it wasn’t publicised at all as far as I could see.”

Margaret Maclean said:  I feel they should have put up temporary signs to warn people of the change.  Not everyone is on the internet and I missed any notifications of this, took me by surprise.  Let's face it, if you are driving the same route most days you can easily miss a sign changing from 40 to 30.” 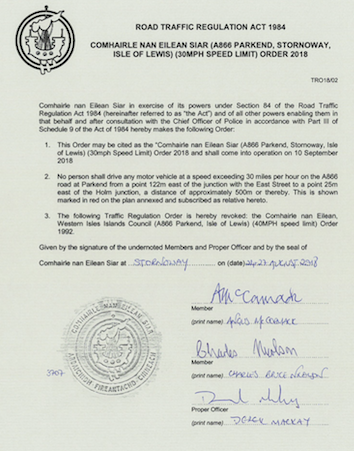