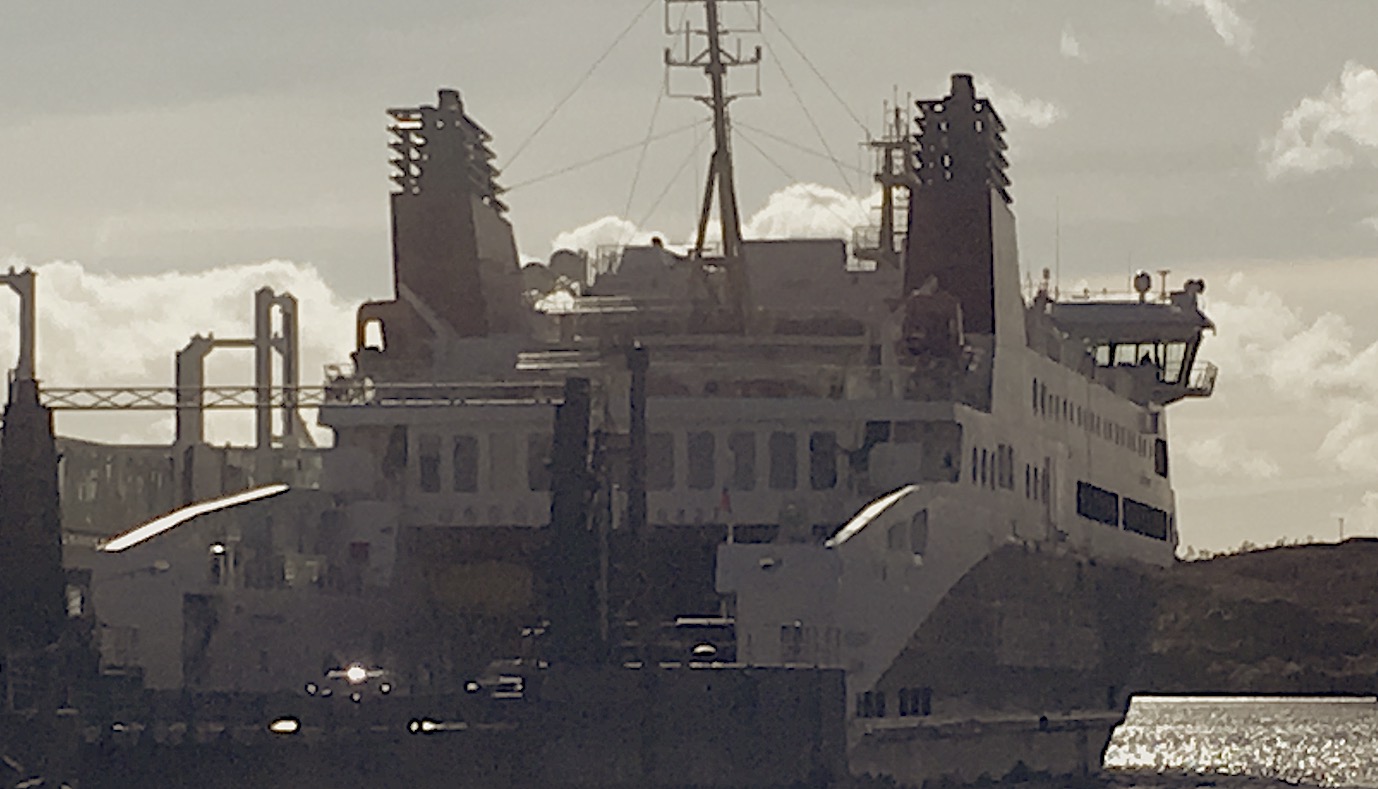 Protests have erupted on social media from passengers kept waiting in Ullapool overnight by the latest crisis to afflict the £42m Loch Seaforth ferry, seen unloading its vehicles for the afternoon arrival in a sunny Stornoway.

The 3pm sailing from Stornoway yesterday (Sunday October 14th) finally departed around 11pm after lengthy delays awaiting paperwork approving the repairs done after the ferry hit the pier while docking on Sunday afternoon,

There were no updates from CalMac on expected departure times from Ullapool after the mid-afternoon statement that the 1830 from Ullapool faced the “high possibility of disruption or cancellation.”

At 05.35am today (October 15th) the Loch Seaforth was again approaching the pier in Stornoway.  And she departed around 7am to head back to Ullapool.

CalMac have stated this morning that she will adhere to the schedule but operate "single-ended" - using only one access.  This seems to indicate continued issues with the damaged bow doors.

Meanwhile, Comhairle nan Eilean Siar are due to meet with CMAL - the organisation which provides the ferries -  tomorrow in Stornoway to discuss a number of questions in relation to the Loch Seaforth.

A report has also been prepared which will be presented to the Islands Transport Forum on Thursday October 25th. This report makes the point that Island local authorities have been concerned for some time at the way several key lifeline ferry and air services are delivered.

According to reports from passengers waiting in Ullapool last night (Sunday), there was no further information available for them as the delays stretched into the middle of the night. One said around 11pm: “We’ve been here since 16.30 today. No one came near any of us. We have been to office twice. No change. Had one text with no further info. It’s utterly shocking.”

Another wrote about 10pm:” My eight-year-old daughter and I are waiting in the car in Ullapool for ferry right now. Not any updates, information and support for passengers. I got information from Facebook.’

Another in the Ullapool queue said: “We've been told categorically that it is not cancelled. We haven't even been offered a drink. Even if this was Ryanair we would have been offered refreshments by now.

“The communication is awful. The desk staff here are admirable, but the lack of updates is totally unacceptable. To hear that they have categorically not cancelled is simply money-saving now.

“There are workers here who will be expected to turn up for work cos it's 'not cancelled' … tired children, tired people…all expected to drive around the islands…it's outrageous. Unacceptable.”

In Stornoway during the evening, CalMac staff explained they were unable to say officially when the ferry would sail until paperwork arrived from the marine insurers. It was not known if the delays arose in London or in Gourock.

One gave a harrowing account of the overnight crossing: "Ferry was freezing cold all way across, everyone was wrapped up in layers even the men had hats and caps and some even had hoodies over and above.

"We were given a voucher for a drink and a roll with filler, soup was also offered but if you took soup you were not entitled to any other drink…absolutely shocking

"We, like many more, have been using this service all our lives and to be treated like this is disgusting."

Others passengers talked of previous delays in Ullapool without support.  One said: "This happened to us last year…sat from 4 pm till 4.30 am in waiting room in Ullapool…not even a cup of tea or coffee…when eventually got on board, café was closed as staff were off duty…disgusted the way we were treated."

Meanwhile announcements were made about the Tarbert ferry this morning (Monday) which is expected to be delayed by one hour.  This is a knock-on effect from Sunday's delays. Traffic from Stornoway due to go on the 3pm sailing was diverted to Tarbert where the Hebrides ferry was delayed to await the additional vehicles. The Hebrides left at 5.20pm instead of the scheduled time of 4.25pm and its services ran late for the rest of the day as a result. Ferry services from Tarbert tomorrow may be disrupted by renewed high winds.

One of the diverted passengers said: “We were booked on 3pm ferry, took alternative of going via Tarbert only for the entire queue of cars to end up stuck behind the usual 40mph-everywhere driver for last 60 miles on way to Inverness. Four very tired kids. Have to say find the staff at pier side very helpful and apologetic.”

Another ferry breakdown affected the service to the Small Isles - Canna, Muck, Eigg and Rum - where the Lochnevis ferry broke down and only passenger services are available.  The Lochnevis is 18 years old.

Reacting to the latest issues, Councillor Uisdean Robertson, who chairs the Transportation and Infrastructure Committee of Comhairle nan Eilean Siar, said that: "In the last year there has not been a Community on the West Coast network of Calmac that has not suffered from ferry breakdowns. To a degree we can accept that there are difficulties sourcing suitable RoPax ferries for our routes. These difficulties are already well documented.

"The ongoing problems of poor communication and decision-making is one that is within the gift of Calmac to address, however.

"Since the poor decision making on ferry deployment on the Triangle Service at Easter the Comhairle have been making the case strongly that something has to change.

"Currently everything happens from Gourock, a port not even on the Calmac Network. A report on lessons learnt on the Easter issue was promised by Calmac but has still to surface. This was raised with the Cabinet Secretary in a meeting recently and he has undertaken to discuss with Calmac.

"The Comhairle has always taken the view that communication and decision making will only improve when management functions are relocated to island areas throughout the network. This has been raised many times with the previous Transport Minister and more recently in separate meetings with Paul Wheelhouse MSP and Michael Matheson MSP.

"This latest incident and the one last week relating to the cancelled sale in Lochboisdale reinforces the need for immediate action."