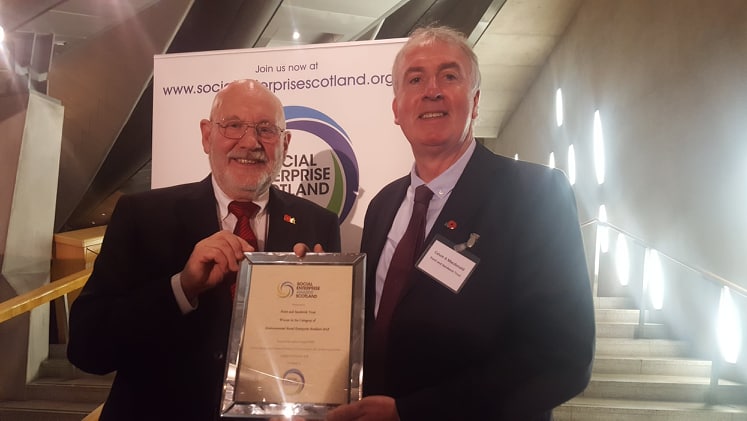 It is the third major award for Point and Sandwick Trust and the second this year.

Consultant community wind farm developer Calum MacDonald, who had steered the 9mw Beinn Ghrideag project to completion, was “absolutely delighted” with the win.

Calum was at the Scottish Parliament last night, along with PST General Manager Donald John MacSween, to collect the award on behalf of Point and Sandwick Trust.

He said: “We’re very pleased for all our friends and supporters who backed us over the 10 years it took for us to get up and running and it’s a great recognition of their support.

“I’m particularly delighted because socially-owned turbines deliver 20 times more economic benefit into the local area as compared to conventionally-owned turbines – and that’s why, in countries like Denmark, half the turbines are socially owned in one form or another. They recognise the huge benefits this delivers into local areas.

The award recognises the innovation and success of Point and Sandwick Trust in operating a commercial business for social good.

It is the first award for Point and Sandwick Trust from the social enterprise sector, with previous awards having come from the renewables and charities sectors.

In 2015, Beinn Ghrideag – the largest community-owned wind farm in the UK in terms of output – was named ‘Best Community Project’ at the Scottish Green Energy Awards.

Then, in June this year, Point and Sandwick Trust won the the ‘Celebrating Communities’ trophy at the Scottish Charity Awards.

PST General Manager Donald John MacSween said: “We’re absolutely delighted to win another major award this year. Delighted for the Point and Sandwick community who have been steadfast in their support from the very beginning, never lost faith with us and now they are reaping the benefits in terms of the social grants that we are making on a regular basis.

“Point and Sandwick will continue to build on this success and we will look to develop other viable social enterprises with the community as time goes on.”

Asked the key to Point and Sandwick Trust’s success, he said: “I think the secret is ambition, tenacity and sheer doggedness in getting the initial project off the ground and producing benefit for the community. Now that that benefit is beginning to flow, we are only limited by our imagination.

“We were encouraged by the community every step of the way and had it not been for that encouragement and support we may very well have faltered and stumbled in our mission to build the wind farm. But that support never wavered and it’s still there and it’s a source of constant delight for Point and Sandwick to now be able to help all those organisations that supported us as we were getting the project off the ground.”

Donald John said the awards reception in the Scottish Parliament had been “excellent”, adding: “It was very, very busy, with lots of social enterprises there from all over Scotland and we did a lot of networking and made lot of new contacts.

“It’s quite obvious to us that social enterprise is the way to go, if the community is to benefit directly from their own endeavours.”

The recognition from the Scottish Social Enterprise Awards is for Point and Sandwick Trust’s business model – which is about maintaining 100 per cent community ownership while also operating commercially, seeking to make maximum profit.

While it is more usual for community-owned projects to be run on a not-for-profit basis, the Point and Sandwick organisation sells the power generated from the turbines and then channels the profits into community projects.

Point and Sandwick Trust has also been shortlisted in the UK Social Enterprise Awards 2018 – in the category of Social Enterprise of the Year – and that awards ceremony is being held in Guildhall, London, on November 28.

Picture: Donald John MacSween, left, and Calum MacDonald with Point and Sandwick Trust’s Award for Environmental Social Enterprise of the Year at the Social Enterprise Awards Scotland 2018 reception in the Scottish Parliament on Tuesday, November 6.