Island walker tells his own story 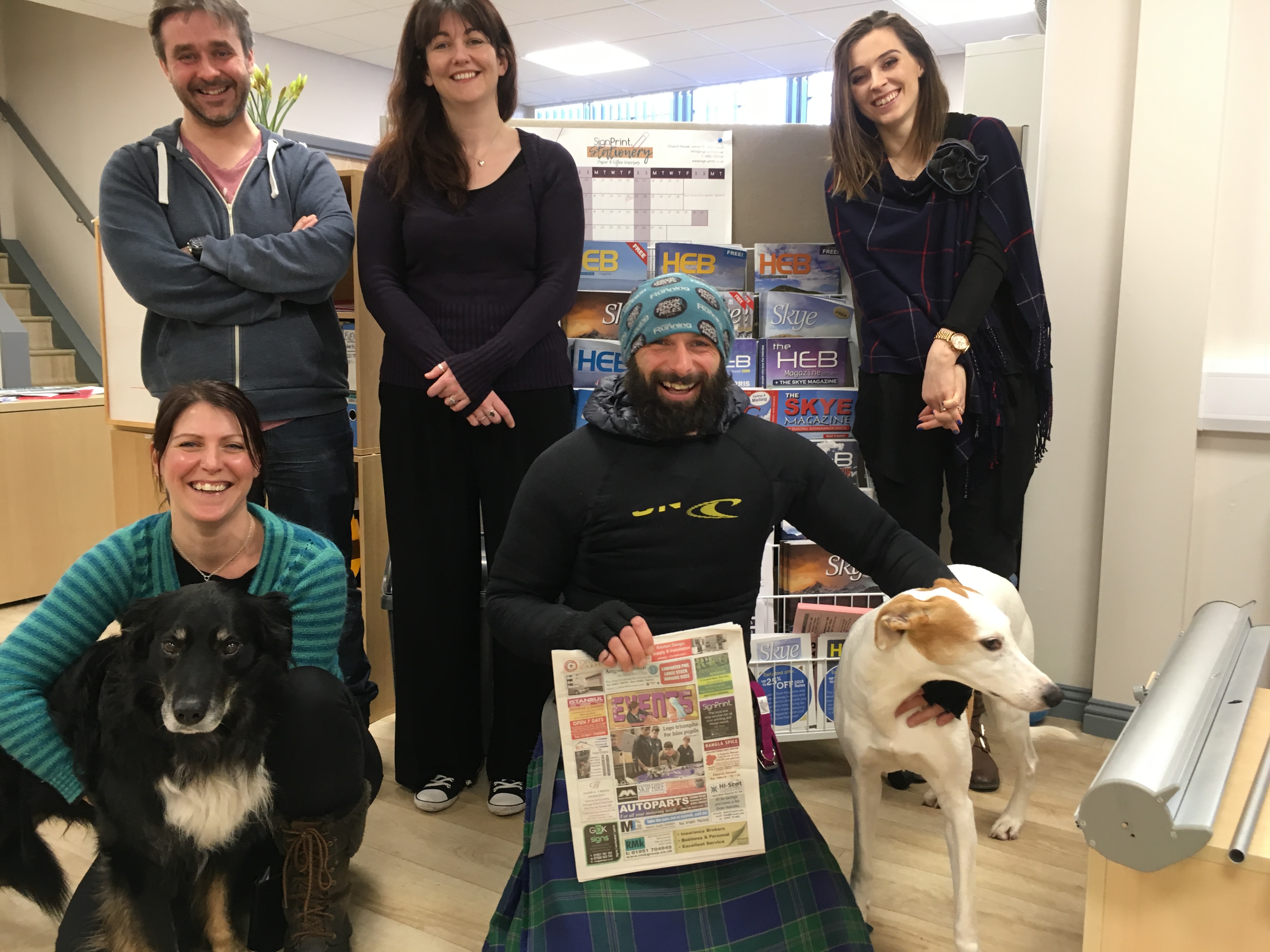 A winter in Lewis and Harris has given charity walker Chris Lewis some of the best experiences of his life – and reminded him of the good to be found in human nature.

Chris told EVENTS newspaper last month that he had ‘fallen in love’ with the islands, their wildlife, landscape and the people who live here, after magical moments in the most extreme conditions.

And on Saturday night (April 13th) at 7.30pm in Stornoway Town Hall, people can come to hear hime talk about this and raise money for his chosen cause SSAFA, the armed forces charity.

He said in EVENTS: “For a long time Jura was my favourite place in the UK, but now that I’ve been here it’s been overtaken. I love everything about it – the idea that you can take off into the mountains for a couple of weeks and the fact that people just can’t do enough to help you out. It’s a truly unique combination.”

Chris has been walking the coastline of Britain since summer 2017 and arrived in the Western Isles back in October, when he spent a few days walking round Barra. His walk takes him round every headland and cove – not just on the more well-trodden road and footpath routes – so he’s genuinely seeing places that are seldom visited.

So much so that islanders are asking him for stories about the places their ancestors lived. He said: “We were invited to talk to members of the historical society in Balallan after we had walked the stretch from North Harris, because we are the first people to walk that length of coastline for years. They were interested in what it was like to walk it, and what we had seen.”

When Chris says ‘we’ he means himself and Jet, the whippet-cross rescue dog who has accompanied him on much of his journey. More than a companion, she calls the shots when the walk becomes too much. “She might just push at me with her nose,” Chris explains. “You’ve got to have empathy walking with a dog and not take silly risks, so if Jet has a problem, then we stop. But 90% of the time it’s her looking at me to say: ‘hurry up!’

“I totally understand why people might not get what I am doing, or why I’ve got a dog walking all these miles with me, but outdoors in the wilderness is her natural habitat and mine. I also know that, if I want to raise money for charity, I won’t do it by just walking when the sun’s out. But there certainly are days when it’s hard and I have to think of the charity and push on.”

The charity is SSAFA, the armed forces benevolent charity, which helped Chris through tough times in his life after he left the Parachute Regiment. With the help of SSAFA he brought up his daughter Caitlin, who is now 18 and studying business studies at Swansea. It was only after she left home that he allowed himself to set out on a challenge which meant testing himself to the utmost. “She’s probably the one person who doesn’t worry about me, because she knows what I’m like!”

With Chris’s military training, it wasn’t necessarily the survival skills that were hardest to get to grips with. Periods of isolation out in the wilderness suit him down to the ground.

Chris said: “For me, the hard bit is to make the transition between isolation and the intense social contact when I come down off the hill. I like being alone – I didn’t even like going to Tesco’s before this. In the islands, especially, I’ve changed completely where interactions with people are concerned and, as hard as it is, I can see the benefit.

“Over and over again, while I have been here, people have amazed me with their acts of kindness. There are too many to mention, but people have fed us, lent us accommodation, walked out in the dark and storms to check that I am OK. One family came across to Little Bernera in a boat on Christmas Day to bring me food, some people from Ness took time off work to bring me supplies because I needed them, people in Harris organised a ceilidh and let me carry in the haggis on Burns Night, some families have just cooked for me and let me be, without questions.”

New friends aside, Chris has seen some sights in Lewis and Harris that will always stay with him, from ferocious weather to special encounters with wildlife.

“The wildlife in the places that don’t often get walked is so abundant – in one place I saw 60 otters grouped together round the mouth of a stream. I got video of them and I have had it verified, but I’m not saying where it was in case they lose their privacy.

“I don’t even know if anyone here realises how lucky they are to have such an abundance of nature on their doorstep. It doesn’t matter what the weather is like – there are times when I have been crouched in my tent just watching the storm and marvelling at the fact that eagles can fly in those conditions.”

Chris and Jet called in to visit the staff at the EVENTS office ahead of his trek during March around North and South Uist and Benbecula.

“Everywhere I’ve been every person I’ve met has said: ‘I wish I was free to do what you’re doing.’ All I can say is, if I had listened to what people said about this idea before I started, I’d still be sitting at home – and I would be much the poorer for it.”

Keep an eye on Chris’s own Facebook page at https://www.facebook.com/chriswalksuk/ for more information.