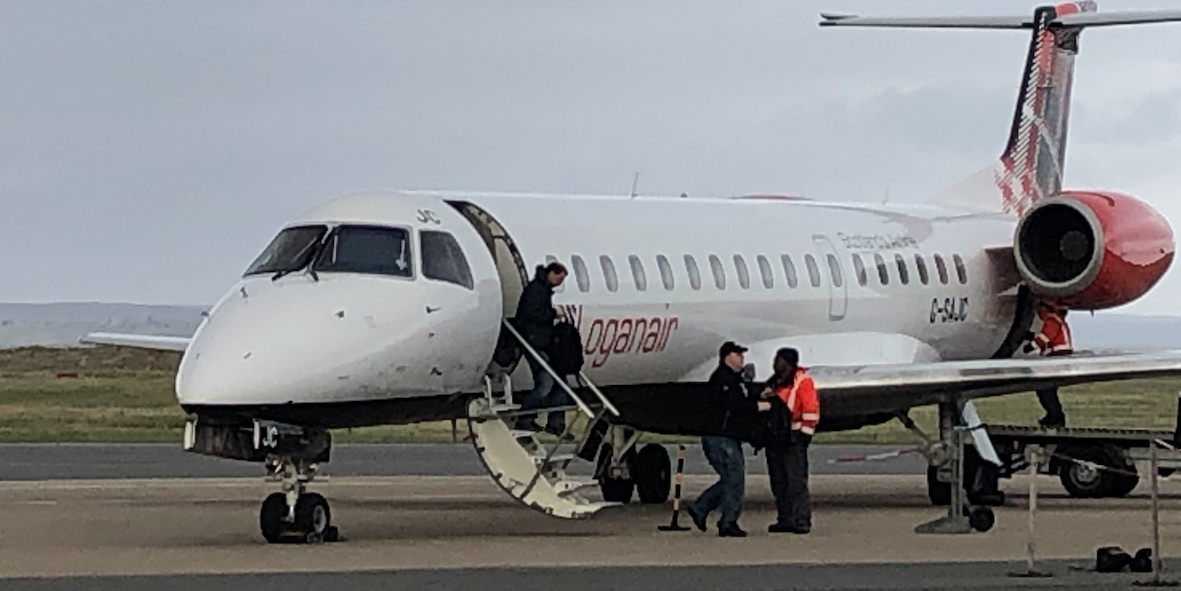 Comhairle nan Eilean Siar has welcomed the announcement made today (Tuesday April 30th) by Loganair which will enhance both air services and passenger experience to and from the Western Isles.

From this weekl, all four of Loganair’s weekday Glasgow to Stornoway services will be operated by the Embraer 145 jet, which has been cutting flight times to as little as 30 minutes airborne since its introduction in January.

From 28 May, one of the four daily Stornoway-Glasgow flights will also provide a new “same plane” one-stop link from Stornoway directly to London Southend.

Benbecula flights to Glasgow on Saturdays and Sundays are also being operated by the Embraer jet.

Councillor Uisdean Robertson, Chairman of the Transportation and Infrastructure Committee, said: “This is very welcome news and we are pleased that Loganair is listening to the customers of the Western Isles and is demonstrating commitment to improving the air services for our island communities.

“Shorter journeys with more seats available on weekdays will only serve to increase passenger numbers and with the introduction of the new London Southend route, we would anticipate a boost to the local economy through business and tourism.”

Loganair has also announced it will commence scheduled services from Inverness to East Midlands Airport, as well introducing a new route from East Midlands to Brussels.  Starting on September 2, the airline will begin an early morning and afternoon rotation to Brussels between Monday and Thursday as well as afternoon services on Friday and Sunday.

Operated by a 49-seat Embraer 145 jet aircraft and with a flight-time of only 1 hour and ten minutes, the airlink will offer a convenient gateway to Belgium’s capital city – which is also a centre onward rail travel to a wide range of European cities.

A popular destination for business passengers, the timetable has been created to enable a full day’s business on the continent, departing at 06:50 before returning to the UK via a 19:00 service.

It will also provide six flights per week between East Midlands and Inverness. The journey takes one hour and 35 minutes, setting off at midday before returning to England at 14:00.

There are strong business links between the two regions with Inverness currently ranked as Scotland’s fastest growing city while the East Midlands is one of England’s manufacturing hubs.

Jonathan Hinkles, managing director of Loganair said: “I am extremely pleased to announce the expansion of our route map while also beginning passenger services from East Midlands Airport.

“Both of these convenient airlinks will benefit the overall region, connecting with Belgium’s largest city – home to thousands of multinational businesses while Scotland’s highlands are now just over 90minutes away”

Inverness Airport General Manager Graeme Bell said: “This is excellent news for Inverness and the Highlands as Loganair’s service will enable passengers to quickly access England’s industrial heartland developing business opportunities or exploring the considerable leisure options in Midlands and the nearby Peak District. It also makes our region more accessible to English visitors keen to discover all that the north of Scotland has to offer.”