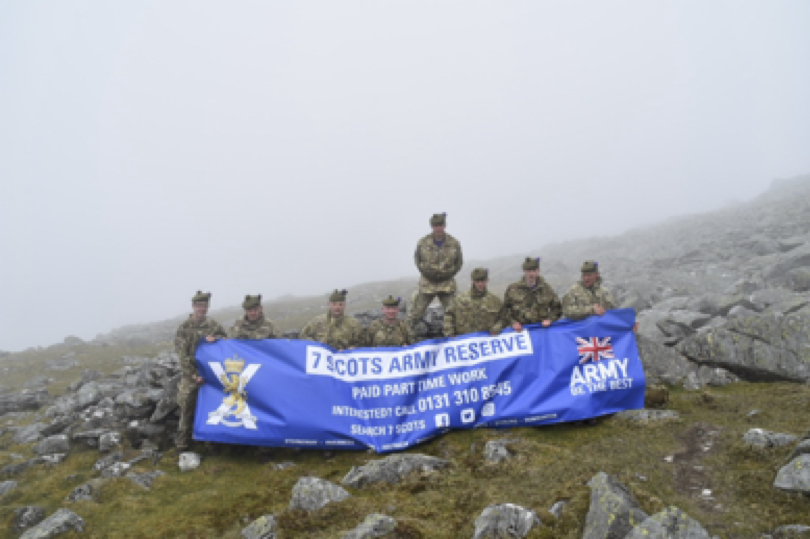 A veterans' breakfast is to be held during Armed Forces Week which runs from Monday 24th June till 1st July.

It's open to all the serving personnel and also to all our veterans, says Sergeant Thomas Stewart. He says:

"So get your eating teeth ready for the next Veterans breakfast, AKA Smudges Belly Buster, to be held at the Drill Hall on Saturday 29th of June from 10am.

"Tell a friend but more important, bring a veteran."

Meanwhile the weekend of 17-19 May saw members of the local Army Reserve unit, Hebrides Platoon 7 SCOTS as well as some of their counterparts in C company 7 SCOTS who came up from the mainland, enjoying the delights of the Western Isles. as well as doing some training.

Sergeant Thomas Stewart says: "On Saturday morning the guys deployed from the Army Reserve Centre on Church Street to the foot of the Clisham where they practiced various map-reading skills before they started the climb up the Clisham proper.

"All was going wonderfully well till 10 minutes from the summit when the mist and rain closed in, spoiling what only be described as out-of-this-world breath-taking views.

"Not long after we had started our descent, the sun once more came out to play, the joys of living in Scotland. The guys from the mainland made the most of these glorious views.

"Once down it was a quick change and of to the Harris Distillery where we made our way with a more determined stride in our step, the reception of the staff at the distillery was faultless so even if you do or don’t drink it was very educational part of the day and, of course, the samples went down a treat also.

"I can safely say that one or two or over a dozen bottles of gin left with us on our way back to Stornoway.

"So how do you finish of a day like that, with a BBQ of course, shame the weather had turned again so it was an indoor BBQ.

"Up early next morning for some more low-level map reading exercises this time in and around the Castle Grounds, who could ask for a better setting?"  Then the mainland troops had to head for the afternoon ferry.