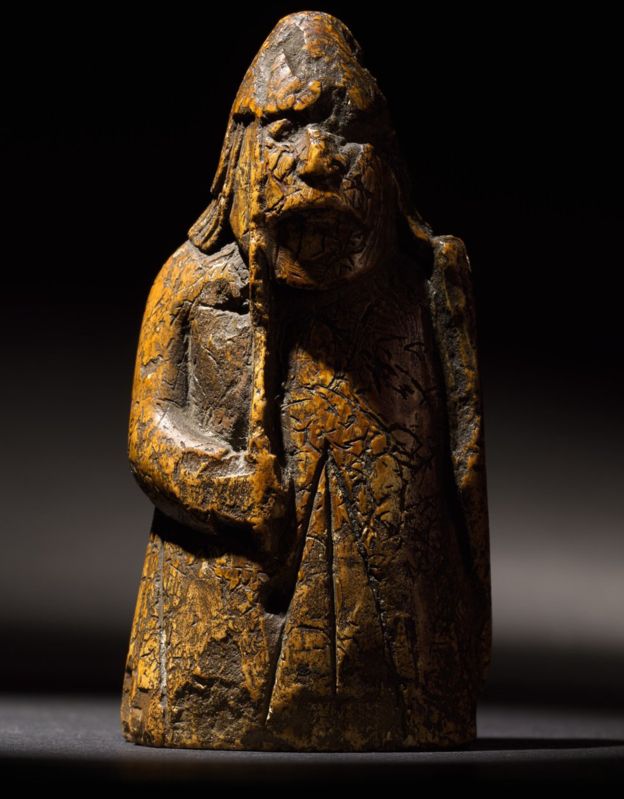 A senior art expert at one of the world’s top auction houses has today (Monday June 3rd) spoken of the ‘thrill’ of holding a rediscovered Lewis Chessman in his hand, after it was brought in for valuation by an Edinburgh family.

Alexander Kader, senior director of Sotheby’s Auction House and the company’s head of European sculpture and works of art, is heading for the company’s Edinburgh office from London today, ahead of a showing of a piece from the Lewis chess set tomorrow.

The chess piece was brought into Sotheby’s in London by an Edinburgh family, who had been keeping it in a drawer since their grandfather, an antiques dealer, bought it at auction in 1964, for £5.

Mr Kader was called to the counter to view the piece when the family came in, something he describes as an everyday occurrence, with most items brought in for valuation turning out to be of little value.

But on this occasion the family, who want to remain anonymous, were offering him something of rare and exceptional significance. Their grandfather had bought the piece, which he had listed as ‘antique walrus tusk warrior chessman’, not knowing that he had rediscovered one of the five pieces that went missing at the time the chess pieces were first found.

The walrus tusk chessmen, found in dunes at Uig in 1831, are believed to be of Norse or Icelandic origin. Eleven pieces are at the National Museum of Scotland in Edinburgh and the British Museum has 82 pieces, of which six are currently on long-term loan to Museum nan Eilean in Stornoway.

After discovery, the pieces were taken to Edinburgh and it is believed that at that time one knight and four warders went missing. The rediscovered piece is one of the missing warders – it has suffered some damage, including losing its left eye.

Mr Kader told welovestornoway.com this morning: “When I saw what it was, I was absolutely thrilled to bits. I am a medieval art specialist and this is one of the mythical objects of medieval art. I couldn’t believe I was holding it in my hand. I grew up watching Noggin the Nog and this warder has such a characterful face. It was marvellous.

“Today all the chessmen are a pale ivory colour, but the new Lewis Warder’s dark tone clearly has the potential to offer valuable and fresh insight into how other Lewis chessmen may have looked in the past. There is certainly more to the story of this warder still to be told, about his life over the last 188 years since he was separated from his fellow chessmen.”

Sotheby’s assessment of the find states: “Rightly regarded as the most famous chess pieces to have survived from the medieval world, the remarkable hoard constituted the greatest ever discovery of medieval chess pieces, and from the moment they were unearthed, the Lewis Chessmen evoked their own mysterious world, steeped in folklore, legend and the rich tradition of story-telling. They have continued to inspire every new generation, from the classic British 1960s children’s animated television series, The Sagas of Noggin the Nog, to, most recently, Harry Potter.

“The warders that made up the hoard are of two types: the majority are bearded with a sword in their right hand and shields either at their left side or in front, and three are shown biting the tops of their shields, identifying them as the legendary Norse warriors known as berserkers. The new Lewis Warder is completely consistent not only with his fellow warders but also with the surviving group as a whole.”

The chessman is to be sold at Sotheby’s in London on July 2ndand is on display at the Edinburgh Grand tomorrow (Tuesday June 4th) between noon and 3pm. Its estimated sale value is between £600,000 and £1million.