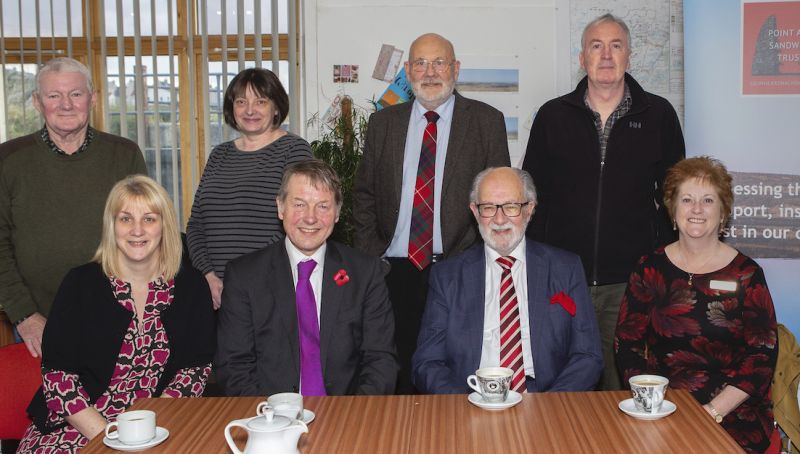 The wind farm gives £25,000 to Bethesda every autumn, followed by £30,000 each spring – an annual commitment that Point and Sandwick Trust has pledged to Bethesda for 25 years, for the life of the turbines.

Financial support for Bethesda is the wind farm’s highest priority, as Point and Sandwick Trust’s only 25-year grant commitment, and that support was pledged to Bethesda six years before the wind farm became a reality, with the signing of a memorandum.

At a presentation on November 7 to hand over the latest tranche of funding, Point and Sandwick Trust underlined its support for the organisation and urged everyone involved with funding Bethesda to carry on supporting it.

Calum MacDonald, former Western Isles MP and developer of the Beinn Ghrideag windfarm, said: “Since it opened in 1992, Bethesda has established itself as one of the most important and best-loved institutions in the islands. They deliver a phenomenal level of care that has helped many hundreds of families and touched us all.

“That is why we made this commitment at the very start of the Point and Sandwick project, back in 2005, and why we are committed to it as strongly as ever today and will be in the future.

“It’s important for people to realise that the funding needs of Bethesda go way beyond what we provide and so I would encourage everybody involved to carry on with their generous donations to this invaluable service which is something that everybody in the islands can be proud of.”

Angus McCormack, Point and Sandwick Trust honorary president, told representatives of the care home and hospice: “We are very pleased that we are able to support you and that we are able to support you going forward into the future. I hope that it gives you a measure of comfort that we will endeavour to make sure that this payment is made in the years going forward.”

Bethesda’s chairman, Dr Neil Davis, general manager Carol Somerville and finance development officer, Natalie Keiller stressed the value of this annual grant to the organisation as it could be relied on.

General manager Carol Somerville: “At the moment we have to raise nearly £400,000 a year just to keep the hospice open so that it’s free for patients and their families – so getting £55,000 a year is a boost to our funds. We are indebted to Point and Sandwick Trust for their ongoing support as we endeavour to continue to provide specialist palliative care to those families in our community who require this care.”

Bethesda chairman Dr Neil Davis explained that the four-bed hospice – a separate entity to the 30 bed nursing home – had been funded over the years through a combination of support from the public and NHS Western Isles.

He told Point and Sandwick Trust: “You will doubtless be aware that in real terms there’s been some difficulties in our conversations for funding. What we lack from statutory support we have to make up by our own fundraising efforts.

“In many respects, that has been year to year, month to month – even week to week – and for us to have the support and the promise of going forward together is hugely significant to us.

“Not only is it seed corn for attracting other funds but it’s security. It’s not just our security. It’s the public’s security. The public feel they have a service which provides for them in their time of need and looks after their families. It’s unique in that it’s not available in any other shape or form.

“For Point and Sandwick Trust to take us under their wing is greatly significant to us.

“As you’d expect, the public are hugely generous, hugely responsive. They are well aware that Bethesda needs this support and it’s not money that is being squandered.”

Dr Davis pointed out that people using the services of the hospice had an average of four admissions before they stayed in the hospice or before choosing to die at home.

He told Point and Sandwick Trust: “Thank you for supporting Bethesda. For the patients, for their families and for the community that knows it has the security of the hospice behind it.”

Calum MacDonald said Point and Sandwick Trust was trying to set an example in terms of community energy companies, in showing that “we all have a duty to the wider Western Isles family, not just to our own immediate neighbourhoods”.

He added: “We sink or swim together and that is why PST is happy to support projects that benefit the wider islands community and not just Point and Sandwick.”

Point and Sandwick Trust board member Rhoda Mackenzie said all organisations with funds available for community projects should “keep Bethesda uppermost” in their minds “when they are considering giving”, especially given the hospice’s difficulties with funding.

“It’s essential that other groups consider the unit foremost when they are deciding where to put the money and that they make a long-term commitment, like we have, so Bethesda can use that as part of their financial planning. We should be looking to ease the burden because fundraising shouldn’t be a worry to concentrate on when there is care to give.”

Picture by Sandie Maciver of SandiePhotos