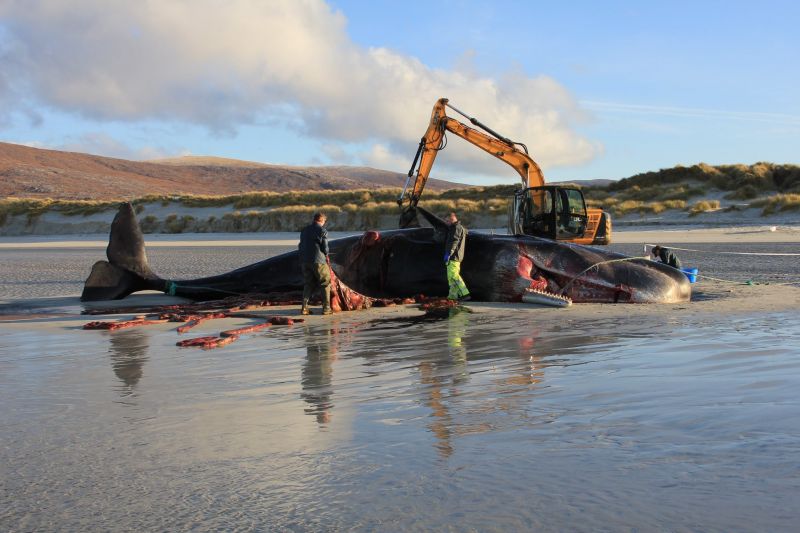 A huge sperm whale which stranded and died on Seilebost beach on Thursday (November 28th) had a stomach full of marine rubbish, according to analysts.

Images of the dead animal and the graphic sight of its stomach contents fuelled a public outcry on social media over the weekend, with many in despair over the damaging impact of marine litter. 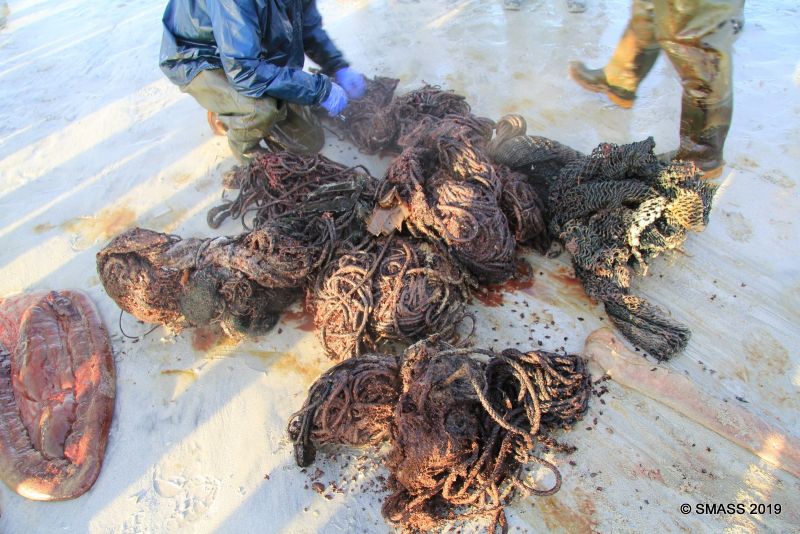 The Inverness-based Scottish Marine Animals Stranding Scheme (SMASS) said the subadult male had more than 100kg of marine debris in its stomach, including plastic net, bundles of rope, plastic cups, bags, gloves, packing straps and tubing. All the material was in a huge ball in the stomach and some of it appeared to have been there for some time.

The whale weighed an estimated 26 tonnes and was 14 metres long, with a number of teams called to the iconic sands after passers-by spotted it and reported it to Stornoway Coastguard and to SMASS.

Tarbert Coastguard Rescue Team were called on at 10.15am on Thursday to provide safety cover for a local member of the strandings team, who yesterday (Saturday) assisted experts from the SMASS as they carried out a necropsy (post-mortem) to fulfil their role of providing a systematic and coordinated approach to the surveillance of sea animals stranded on the Scottish coast.

A statement from the SMASS today said that, despite the stomachful of marine debris, the animal wasn’t in particularly poor condition. They said: “Whilst it is certainly plausible that this amount of debris was a factor in its live stranding, we actually couldn’t find evidence that this had impacted or obstructed the intestines.

“This amount of plastic in the stomach is nonetheless horrific, must have compromised digestion, and serves to demonstrate, yet again, the hazards that marine litter and lost or discarded fishing gear can cause to marine life. It is also perhaps a good example that this is a global issue caused by a whole host of human activities. This whale had debris in its stomach which seemed to have originated from both the land and fishing sectors and could have been swallowed at any point between Norway and the Azores.”

A large number of observers were drawn to the site to see the gruesome process of analysis and later clearing of the carcass, which was done under direction from members of the Coastguard and Comhairle nan Siar’s disposal team.

The SMASS spokesman said: “Surrounded by fragile dune ecosystems, there was no option to move a 20-tonne animal elsewhere, towing out to sea wasn’t an option so it needed to be buried on site. This was completed as light fell yesterday, so if you go to the beach today, there should be almost no evidence that there was a large sperm whale necropsy undertaken there this weekend.”

The SNP’s prospective parliamentary candidate Angus MacNeil said: “The image of the whale on Seilebost Beach has shocked many people and further highlights the problem we have with marine pollution.

“Marine pollution is a problem world-wide which affects the Western Isles as everywhere else. If not controlled marine pollution could adversely affect the fishing industry and tourism which rely on our reputation for a clean environment and increasingly the wild life around our coasts.

“There are a number of different strands to marine pollution – locally we need to ensure that waste – household, agricultural and from those that use the sea is properly disposed of and not just dumped. Individually we need to reduce our use of plastic and single use items, ensure that we do not litter beaches and public places and sort our household waste correctly.

“Personally I often pickup rubbish as I walk the beach at Tangasdale and I know many others do this too. I commend all those who tidy our beaches regularly and for campaign groups such as ‘Clean Coast Outer Hebrides’ for raising awareness of the importance of our coastal environment. We must all play our part to preserve our coasts for use by future generations.”