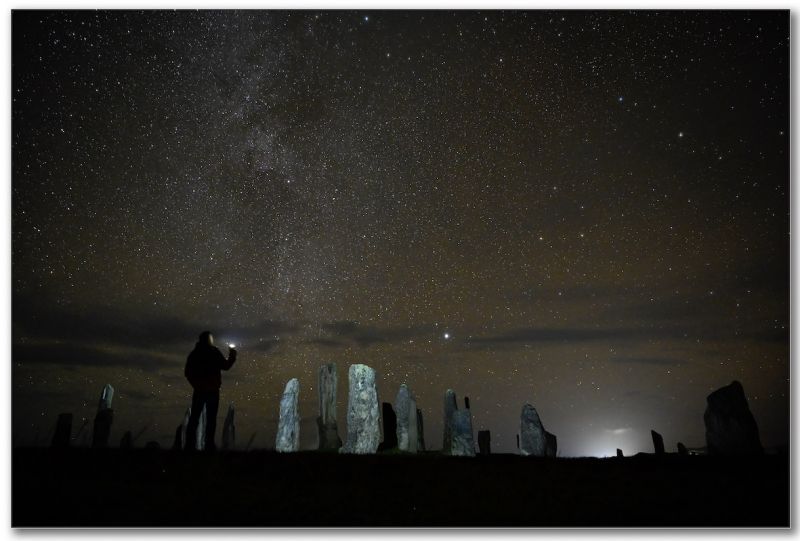 Scott’s winning photograph, Callanish and the Cosmos, will feature on the cover of the festival’s printed programme, available from this week. The photograph will also feature alongside five other shortlisted entries in an exhibition opening at An Lanntair on Friday 7 February, the festival’s opening day.

Festival programmer Andrew Eaton-Lewis said: “Callanish is surely the most photographed location on Lewis so it is a big challenge to create an image that feels original and surprising, but what Scott manages to do with light and perspective in this image is really striking and memorable. We’re delighted that this captivating photo will be helping to showcase the Hebridean Dark Skies Festival to the world.”

In addition to Callanish and the Cosmos, the Hebridean Dark Skies Festival photography exhibition will feature work by five other shortlisted photographers, Douglas Rattray, Andy Yearley, Jethro Thomas, Christian Cooksey and Steve Ferguson, all from Lewis and Harris.

The 2020 festival will be dedicated to the memory of John Brown, who sadly died at the end of November, just days after the festival programme was printed. A guest of honour at the first Hebridean Dark Skies Festival’s opening weekend, Professor Brown was also a significant source of support and advice as the festival programme came together, and was to have made a second appearance at the second festival in February.

The second festival is part of a new winter tourism campaign, Winter in the Wild, led by An Lanntair in partnership with Outer Hebrides Tourism, Visit Scotland, Hebridean Hopscotch, Loganair, Cal Mac, Glasgow Airport, and other local organisations. #winterinthewild.