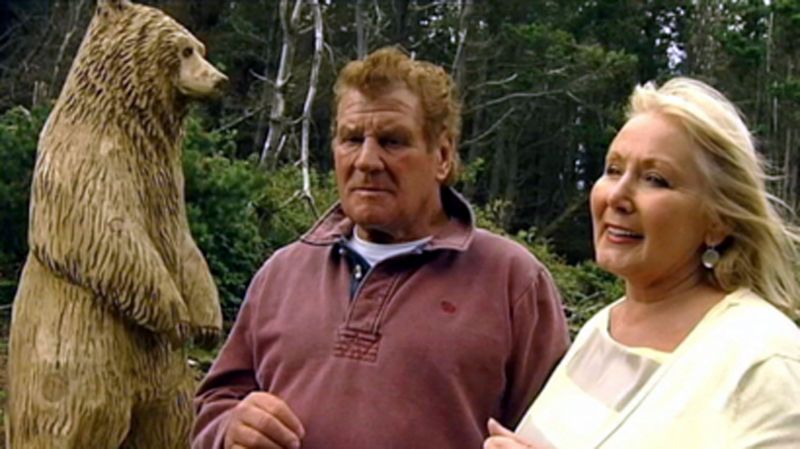 Andy Robin, the former Commonwealth wrestling champion and well-known as the guardian of Hercules the bear, has died aged 84.

He is to be buried in North Uist where Hercules is buried alongside a commemorative statue.

The 9ft tall, 380kg bear became the world’s most famous bear. In addition to appearing in wrestling matches with Andy, he appeared in television commercials and also had a cameo part in the James Bond film Octopussy with Roger Moore. He also met Margaret Thatcher.

Andy’s wife Maggie belongs to Grimsay in Uist and it was in nearby Benbecula that Hercules made international headlines when he disappeared for three weeks while filming for a TV commercial.

On August 1, 1980, he went for a swim near Petersport in the south east corner of Benbecula. He was last sighted on the Island of Wiay which lies off Petersport.

There was a massive land, sea and air search following his disappearance and he was missing for three weeks. The bear was finally sighted near Clettraval in North Uist. Although Andy was in hot pursuit Hercules seemed reluctant to give up his new-found freedom. He was finally shot with a tranquiliser dart. After he fell asleep, he was put into a large net and air lifted to Lochmaddy playing fields in North Uist where he was then transferred to his specially built cage-come-travelling home. A delighted Andy and his wife then went into the cage and fed Hercules on prawns.

But the tale did not end there. Andy was charged with keeping a wild animal without a local authority licence contrary to the 1976 Dangerous Wild Animals Act.

When the case was called at Lochmaddy Sheriff Court, a letter was submitted from Mr Joe Beltrami, the well-known Glasgow lawyer acting on Andy’s behalf, pleading not guilty to the offence and the trial was fixed for July 14. The maximum penalty for such an offence was £400.

Andy denied that on August 20 and 21, 1980, and September 13 and 14, 1980, at Petersport, Benbecula, the Island of Wiay, and the Island of North Uist, that he kept a dangerous animal, namely a European Brown Bear of the family Ursidae, without a local authority licence.

Andy had planned to bring the bear to the trial as a ‘silent witness,’ in his new £65,000 coach, built for him in Belgium.

However on May 7, 1981, the Procurator Fiscal, Mr Colin Scott Mackenzie, dropped the charge, and explained: ‘I have informed Mr Beltrami that if Mr Robin could obtain a proper licence under the Dangerous Wild Aninals Act of 1976 from Stirling District Council, then I would consider that the public interest had been served and that the public would then be protected. I now understand that the District Council has granted the necessary licence.’

Mr Mackenzie also revealed that since Mr Robin had been charged that he had received pleas from ‘diminutive citizens’ urging ‘hands off Hercules.’ He said: ‘I assured them individually that I was not going to do anything to Hercules and that it was his owner I was dealing with. Now that the licence has been granted, he is no longer in jeopardy from the authorities.’

One man who was disappointed was George Peat of the Lochmaddy Hotel in North Uuist. His hotel had been fully booked by Press representatives and TV crews who had planned to cover the ‘Hercules trial’.

Andy said at the time: ‘I am delighted with the decision to drop the charge as it clears Hercules name for the future. He can now work anywhere in the UK. He is the only bear in the world with two licences -- one for a performing animal and one for a dangerous animal.“

The £1000 reward for information leading to the capture of Hercules was shared by two Balmartin crofters.

Hercules was featured on the cover of Time and helped to promote the Miss World contest. Hercules caddied for comedian Bob Hope at the Scottish golf course of Gleneagles. Hercules was once named "Personality of the Year" by the Scottish Tourist Board and received a telegram from US President Ronald Reagan.

Hercules was born in captivity at the Highland Wildlife Park in Kingussie. The park was unable to accommodate more bears, and if the cub could not be rehomed, it would have to be put down.  Andy Robin had appeared on the same card as a wrestling bear in 1965. Learning the cub was available, Robin and Maggie bought the bear in 1976 for £50, with the idea of training it. In September, with the cub old enough to leave his mother, the couple brought him to their home on Sheriffmuir, near Dunblane.

The couple were devastated when Hercules died in 2001 and then left their ranch in Sheriffmuir to move to Auchterarder where Maggie ran the Bear Necessities Boutique.

In 2013, Andy and Maggie were invited to unveil a life-size statue of Hercules on North Uist and two years later Hercules was reburied at the same spot.

Andy suffered a stroke six years ago and his health deteriorated in the last few weeks, leading to his death on Wednesday, December 4, evening at St Margaret’s Community Hospital in Auchterarder.