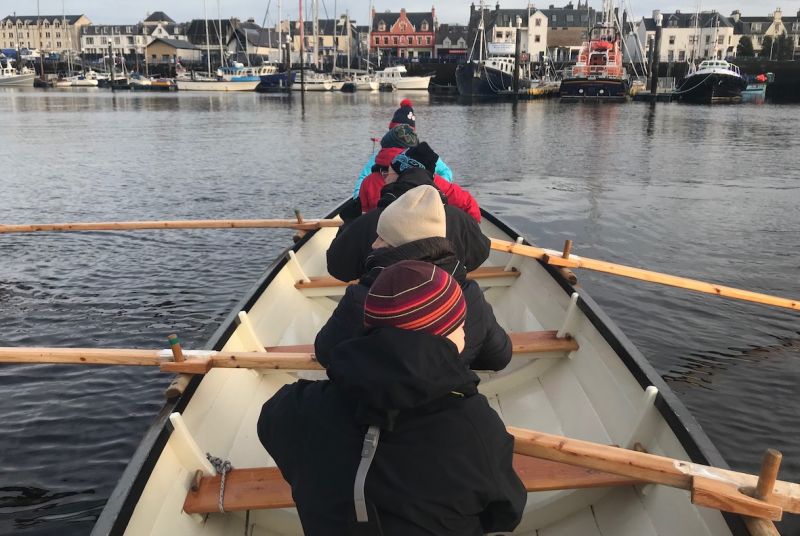 Representatives of Point and Sandwick Trust joined the rowers in Stornoway harbour for the traditional Boxing Day outing yesterday (Thursday December 26th), following a donation to pay for safety equipment from the community wind farm charity.

Stornoway Rowing Club had applied for a grant for a number of Spinlock lifejackets in a variety of sizes which are now being used by the club and will sustain it into the future.

Rowing Club chair Rose Bugler said: “It was for safety equipment and it’s fantastic because it means that whatever the club decides to do in the future, in terms of challenges, the equipment is up to it. It’s good quality gear.”

Point and Sandwick Trust board member Jane Watson was among those who joined Stornoway Rowing Club for their Boxing Day row in ‘Madadh Ruadh’ and tested out the new lifejackets.

Jane said afterwards: “I really enjoyed it. It was good, once I got the hang of it and got the rhythm.”

Chair Rose Bugler said the club wanted to be accessible, to give people who have not rowed before the chance to come along and give it a go.

Stornoway Rowing Club is one of five clubs and six skiffs that row out of Stornoway. They were joined in the harbour yesterday afternoon by West Side Rowers in Fir Chlis.

West Side Rowers said it was a wonderful sport, with clubs growing over the past couple of years.

West Side Rower Rosemary MacRitchie said: “I love it. It’s great. It’s a very close community, we’re very good friends, and it’s the main thing I do outside of work.

Ally Macleod agreed it was “fantastic” and said rowing could be combined with fishing in the summer, while fellow rower Eddy Graham said he had enjoyed combining a rowing trip to Little Bernera earlier in the year with a dip in the sea. Because the skiffs are portable by trailer, it is possible to see parts of the island you wouldn’t otherwise see.

“It’s a win-win situation.” It also gave a connection to history, with the provenance of the skiffs.

She said they had been “desperate” to get out for their traditional Boxing Day row but had also managed out on the Saturday before Christmas – complete with Santa hats and elf outfits.

Donald John MacSween, general manager of Point and Sandwick Trust, said it was a great activity which the community wind farm was happy to support – and encourage people to take part in.

He said: “Making outdoor activity, such as rowing, accessible and safe for all age groups is something that PST wish to encourage and support.

"Outdoor activity need not be limited to the summer months and there is plenty opportunity, even in the winter time, to enjoy some rowing.

“Stornoway Rowing Club are active throughout the year as long as it is safe and enjoyable and you don't have to be a superfit athlete to take part. It is a fun team sport and there is a growing interest in the sport nationally and in the Western Isles.”