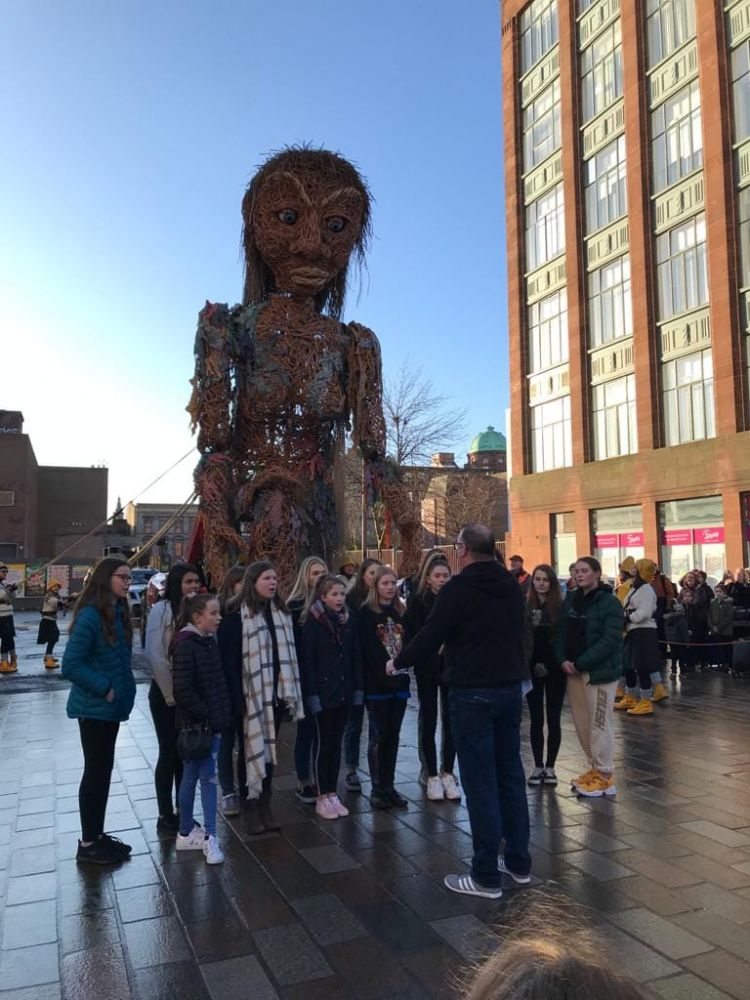 Over 3,000 people tuned in to a live-stream on Friday night (January 17) to watch island youngsters at the top of their game in their Celtic Connections debut in Glasgow.

Over 70 young people were on the stage at Glasgow Royal Concert Hall for Dìleab: Air ‘a Chuan, a concert of music developed as part of the heritage legacy project Dìleab.

Dìleab: Air a' Chuan brought together school pupils and musicians from across the Western Isles to celebrate our rich connection with the waters which surround us through music and song, as part of the 2020 Year of Coasts and Waters.

The Dìleab project started in 2018, with pupils researching different subjects connected to the history of the islands. The schools were given themes related to the island – Barra and emigration, Uist remembering World War I, Harris with protest and politics and Lewis remembering the Iolaire Disaster.

The pupils worked with local musician Willie Campbell to produce five original compositions on these themes.

Friday night’s performance was just the latest public outing for the results of the project, with the live stream bringing praise from watchers far and wide.

Deputy First Minister John Swinney tweeted after the concert: “An outstanding performance by the pupils of Sir E Scott School, Castlebay School, Sgoil Lionacleit and the Nicolson Institute. Beautiful tribute to our Gaelic culture and a fabulous illustration of the strength of Scottish education.”

Also praising the young performers were the musicians who steered the project through to its triumphant performances. Project co-ordinator Rhona Johnstone said: “It’s a privilege and an honour to have been involved in the Dìleab project from the outset. The talent on display from our young people is phenomenal and I had immense pride listening to and playing with them.”

Leading musician Willie Campbell also said: “It’s been an unforgettable few days for all the kids involved. They got a well earned standing ovation last night. The growing confidence, pride and ability is something really special and it’s what Dìleab is all about. It makes you proud to be an islander. I love it. It’s a joy to be a part of it.”

And Sir E Scott choir conductor Iain Maciver said: “I've had many highlights with Sir E Scott choirs over the years but tonight ranks as one of my proudest moments as a conductor. I am so proud and humbled to have worked with the choir for Dìleab 2020 @ Celtic Connections. Thank you all, you are all stars.”

An additional bonus for the Western Isles pupils was the chance to participate in the spectacular awakening of Storm – Celtic Connections giant animated sea goddess – as she made her impressive way through the streets of Glasgow on Saturday. The Sir E Scott choir was asked to take part in the sea goddess’s journey, singing as the 10 metre high Storm was awakened and rose from the river Clyde.

As part of the same event, Castlebay Community School choir and Dìleab musicians performed for a second time on Saturday lunchtime, alongside Willie Campbell, at the Glasgow Royal Concert Hall. The full Friday night performance is available to watch here or vimeo.

Pictures show the performers on stage at Glasgow’s Royal Concert Hall, and the choir of Sir E Scott School, conducted by Iain Maciver, calming the Storm in Glasgow on Saturday.