Isles MP Angus Brendan is pleading for people not to travel to the Islands - as concern grows that the lack of testing is the main reason for the apparent lack of confirmed coronavirus cases in the Isles.

At the moment, any tests being done have to be sent to the mainland for processing.

A facility for testing is being established on the Islands but it is still in the process of being commmissioned, the NHS stated earlier in the week.

"To be clear, no public houses or other entertainment venues should be opening for patrons until further notice."

Concern was also voiced at the NHS Western Isles press conference on Wednesday (March 18) about the impact of people returning from the mainland and from overseas employment and other trips.

There are continuing pleas on Twitter and other social media for people to self-isolate on return to the Islands to minimise the speed of transmission of the virus.

He said: "This is not far from Third World basic.  No ventilators, no much oxygen either, no testing.  Islands such as this could be badly hit. Message is…don't come on holiday, please."

Asked on Twitter about the level of provision, the MP stated: "Scotland and the UK does not have what it needs. Scotland has 360 ventilators, I was told.  The maths ratios of possible demand to availability are not good."

And Kate Forbes, MSP for Skye, Lochaber and Badenoch, and the Cabinet Secretary for Finance said on Twitter: "If you live elsewhere, please don’t use the Highlands as your means of self-isolation. People live here who are trying to follow Government guidance and the continuing flow of campervans and other traffic who appear to be escaping the cities is not helping."

But also on Twitter, musician Jane Hepburn-Macmillan pointed out that pubs and the like in Stornoway were remaining crowded despite the Government advice. This was a display from Era nightclub for last weekend, Saturday March 14th. 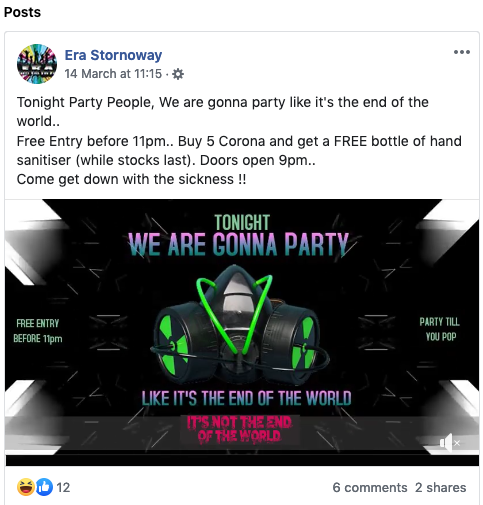 Jane pointed out last night (Friday March 20) that: "So on average, if one person catches it, they pass it on to three people. Each of them then pass it on to another three, and on it goes.
Right now: three #Stornoway pubs are absolutely heaving with people. STAY AT HOME," she pleaded.

The first coronavirus case in Scotland was on March 2. A total of 19 days ago.  For comparison, the first case in Greece was recorded on February 26 and, 12 days later, on March 10, the government announced the closure of all schools and community centres; March 14 brought with it the closure of all pubs, clubs, cafes restaurants, except for takeaway, and no more than five people are allowed to be in line at once. All stores have been shut since Wednesday March 18, save for pharmacies, fuel stations and grocery stores. From tomorrow all flights to and from Greece will cease.

Earlier in the week, a plan to bring football strips from the youngsters of Point FC to a school in Africa has been disrupted at the 11th-hour due to the coronavirus pandemic.

Development consultant Alasdair Nicholson, who regularly goes to Tanzania to help develop local skills in community enterprise, was in Edinburgh ready to fly to Africa on Wednesday March 18, but decided to cancel the trip in the light of the UK warning against all non-essential travel.

Alasdair, who also works as a community consultant for community wind farm charity Point and Sandwick Trust, had collected a bundle of junior Point FC strips, as well as science textbooks, to take with him to a joint primary and secondary school at the foot of Mount Kilimanjaro.

He had anticipated great “glee and happiness” at the gifts and had told the Wee Reds in Point (pictured below) that children in Africa were often without strips or boots – sometimes even footballs. “Sometimes they make footballs from rolled up banana leaves,” he said. He also told the youngsters: “I’m just the carrier of these strips. You are the ones who’re donating them.”

However, he decided against making the journey and plans to go back later, when the situation has settled down.

Alasdair said: “Things are moving so fast with corona in the last few days that it is uncertain what borders will be closed or flights cancelled. This is a postponement rather than a total withdrawal but I would not want to be an accidental vector from any casual contact in passing through Amsterdam or from a crowded African bus.

“Yes, I’m disappointed but there will be vulnerable people who are at risk and any problems I have encountered are nothing compared with the anxiety that they will have so our thoughts should be with our neighbours and community."

Alasdair Nicholson with young Point FC players and representatives from the club and Point and Sandwick Trust. Photograph by Sandie Maciver of SandiePhotos