A new scheme to help trace vulnerable missing people has been launched.

The scheme has already had success throughout the UK prior to its launch in the Highlands and Islands.

It is made up of a detailed form, which can be pre-populated with vital information such as a photograph, contact details, medication required and significant locations.

This can be used by officers to save vital time in a missing person inquiry.

The scheme will be promoted with everyone registered with adult care services in the Highlands, including people living with dementia, a learning disability or experiencing mental ill health.

Sergeant David Campbell, missing person co-ordinator for Highland and Islands Division, said: "People go missing for a variety of reasons and unfortunately vulnerable people becoming lost, distressed or disorientated is something that we can be faced with.

"This not only puts the missing person at risk but it also causes considerable distress for their loved ones.

"In the Highlands alone, more than 40 people with dementia have been reported missing in the last year.

"Speed is of the essence in any missing person enquiry - the longer someone is missing, particularly if they are vulnerable, then the greater the risk to them.

“The Herbert Protocol enables people to be assured that all relevant information can be passed quickly to police, and will provide vital assistance to officers in their search efforts."

The Herbert Protocol originated in Norfolk and takes its name after Normandy landings veteran George Herbert, who lived with dementia and sadly died in 2011 after he went missing while looking for his childhood home.

If a family has a relative in a care home and wishes to complete the paperwork in their respect they would initially discuss that with the care home who would then include that in the individual's care plan.

For relatives at home the paperwork can be obtained through any police station.

New police training to detect and investigate instances of wildlife crime has been welcomed by Scottish Land & Estates.

Sarah-Jane Laing, Chief Executive of Scottish Land & Estates said: “We are fully supportive of increased resources to tackle wildlife crime alongside tougher penalties for those who are convicted so this is a positive announcement by government.

“Equipping police officers with the specialist training and knowledge they need to investigate wildlife crime should aid detection rates and hopefully lead to more offenders being brought to justice. The government’s wildlife crime report published last month highlights that despite a decrease in the level of wildlife crime in Scotland over the past five years there remains a clear need to maintain momentum on this issue.

“For those found guilty of such reckless acts, we continue to call for longer prison sentences and bigger maximum fines for the most serious wildlife crimes. We also believe that enabling police to use and manage surveillance cameras under strict RIPSA procedures (Regulation of Investigatory Powers Scotland Act 2000) where evidence suggests there could be acts of wildlife crime, could act as a real deterrent and could lead to more prosecutions. This would enable those police officers who are about to embark on their new training to work even more effectively in the future.”

In August 2019 Kenny MacLeod contacted Western Isles Lottery advising of the hopes to set up the new Historical Society.

He explained in his application for funding that many of the older generations in the area have passed and, sadly, so much history has already been lost. The aim of the SHHS was to buck this trend and preserve the history for the future generations.

A plea went out on their newly compiled Facebook page for old pictures, artifacts and stories from the South Harris area. The response from the outset has been fantastic and the page already has hundreds of people following it.

However, without the necessary equipment to collate all the information being received and to hold various talks and events in the area, for locals and tourists alike, these projects were unlikely to get off the ground.

Janet Paterson of The Western Isles Lottery said: “The Lottery Team were delighted to present the Society with a cheque for £812.52 to cover the costs of a laptop, external hard-drive and a TV/display screen to enable them to take their plans forward as quickly as possible.

"It must be noted that the funds were raised by supporters of the lottery in the Harris area over just a few weeks so it is credit to them for supporting their own area to make projects like this happen across the Isle of Harris”.

Kenny MacLeod, said: “We are extremely grateful to the Western Isles Lottery and its supporters for the fantastic sum of money raised. This will give the Society the chance to purchase new equipment to help us archive and preserve a great deal of history, photographs and information for future generations, giving our youngsters a chance to learn about days gone by from the older generations, keeping our history alive and bringing the generations closer together”.

This brings the total raised by supporters of the local lottery in Harris to £8,200 which has now been redistributed back into the community.

To support your local community, you can join the lottery at www.westernisleslottery.co.uk or telephone their ticket line on 0300 30 20 444. 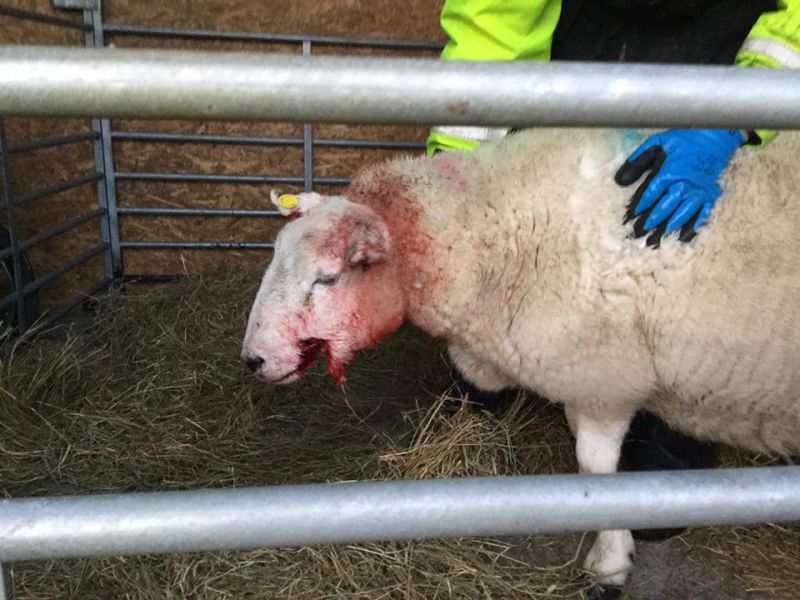 Appeal to dog-owners after sheep attack

A crofter in North Tolsta has appealed to dog-owners to keep their dogs well under control, after three reported incidents in which sheep were attacked by dogs.
The latest incident saw a ewe grazing on the machair at Traigh Mhor so badly injured that she was put to sleep by a vet soon after the attack, which happened on Saturday (January 18th).
It follows two other reported incidents in recent weeks, one in the same area and one on the grazings near Garry beach.
Posting on the North Tolsta Community Noticeboard, the owner of the most recently injured sheep said: “Keeping livestock is hard work, but it’s even harder when we have these incidents to contend with. Please can we work together to support our crofting community.”
A spokesman for Police Scotland said they were aware of a report of sheep-worrying in the Tolsta area, and that all dog owners should be aware of their responsibility to keep dogs under control at all times. 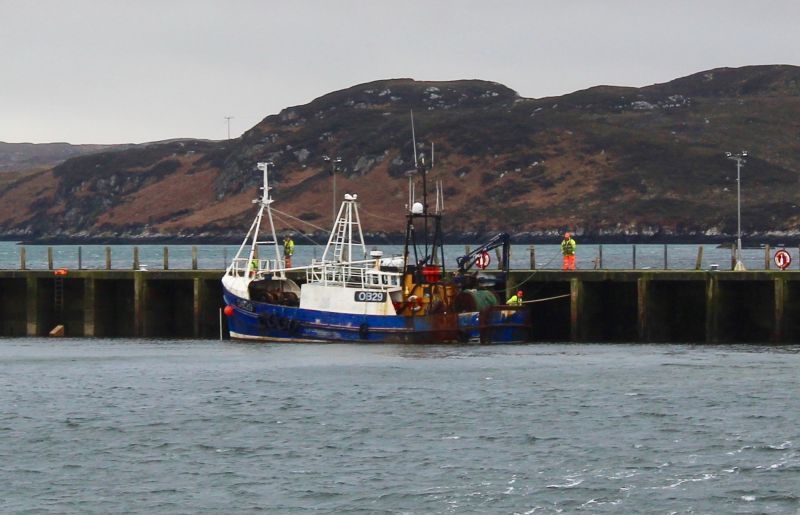 Stricken vessel tied up in SY

A trawler which had to be rescued from the middle of the Minch in high seas last night was safely tied up in Stornoway harbour and is now heading for the Goat Island slipway to undergo repairs later today (Monday January 20th).

The FV Ranger was escorted into the harbour by Stornoway lifeboat late last night after a dramatic rescue which involved two lifeboats, the Emergency Towing Vessel Ievoli Black and the Coastguard helicopter R948 from Stornoway.

The Ranger’s three-man crew issued a Mayday appeal for help after finding they were taking on ‘a significant amount’ of water east of Tolsta Head soon after 1.20pm yesterday (Sunday).

Stornoway Coastguard operations centre co-ordinated a response during which two pumps were lowered onto the vessel in successive runs by the Coastguard helicopter. Lochinver RNLI lifeboat and Ievoli Black stood by, unable to attach a towline in heavy seas.

Stornoway RNLI Lifeboat later took over from Lochinver, and escorted the Ranger under her own power into the harbour, where she was met by members of Stornoway Coastguard Rescue Team.

The CRT carried out crew welfare checks and made sure the vessel was secured at the pier. Along with Scottish Fire & Rescue, the CRT then assisted with safety cover and the movement of pumps onto the vessel to stem the water ingress while she was alongside. All teams were stood down around 12.25am today (Monday).

Picture below taken by RNLI Lochinver volunteer crew during yesterdays rescue. Picture at top of FV Ranger getting ready to go on the slip at Goat Island. 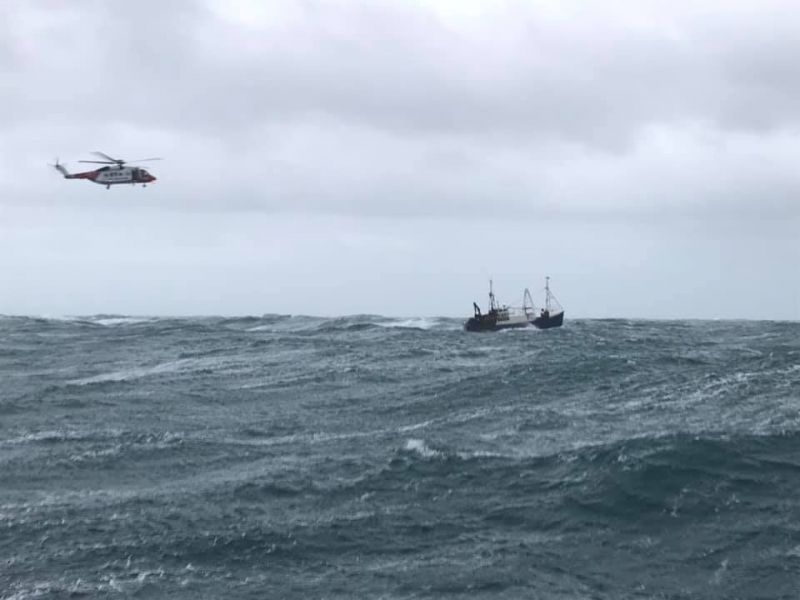 A new language development programme has been created for young children in the Western Isles.

The programme has been designed to empower parents with skills to support their child’s early language development through fun and easily accessible activities.

Get Me Talking has now been created into a package that any play leader/facilitator of a parent and toddler group can use.

The development of this programme came about to address an increase in referrals to early nursery placements in the Western Isles, due to delayed language development.  A team was established to develop ways to support language development for children up to the age of three. The group of NHS and education professionals agreed that interventions needed to be carried out earlier in a child’s life and that to improve language skills, interventions must be run in partnership with families.

As the team explain in their package: “A baby learns about him or herself, other people and the world by being looked at and responded to, spoken to, sung to, read to and played with.

"A baby can learn by looking and playing on their own, but the learning is not as rich as when the child is looking at something or playing with something together with an adult. When a parent shares an experience with a baby or child, they give the experience meaning. They give the child a sense of what he or she should feel and they teach the child language that is associated with the experience.”

The Get Me Talking programme focuses on promoting various key messages and ‘top tips’ that parents and caregivers can use to encourage and promote meaningful and rich interaction and communication with their child. The programme runs over five weeks and each weekly session lasts approximately 40 minutes.  Every week parents/caregivers learn a new key message, such as ‘Face me’, ‘Talk to me’, ‘Play and Explore with me’, and ‘top tips’ for supporting their child’s early language development, which is all carried out through fun activities.

Each week focuses on a different theme and a number of interactive stations are set up to demonstrate activities that can be easily replicated at home, but these can also be changed to suit individual settings. Parents are encouraged to practise the key message and ‘top tips’ at home. At the end of the programme it is hoped that parents/caregivers will feel more confident when interacting with their child, will engage with their child more and will use more strategies to support their child’s language development.

Attendees also learn about the importance of messy play, tummy time, reading aloud, as well as guidance on, and the benefits of, limiting screen time.  Information sheets on these topics are included in the Get Me Talking package.

If you are interested in the programme please ask your child’s nursery or local parent and toddler group whether they are or will be running the programme.