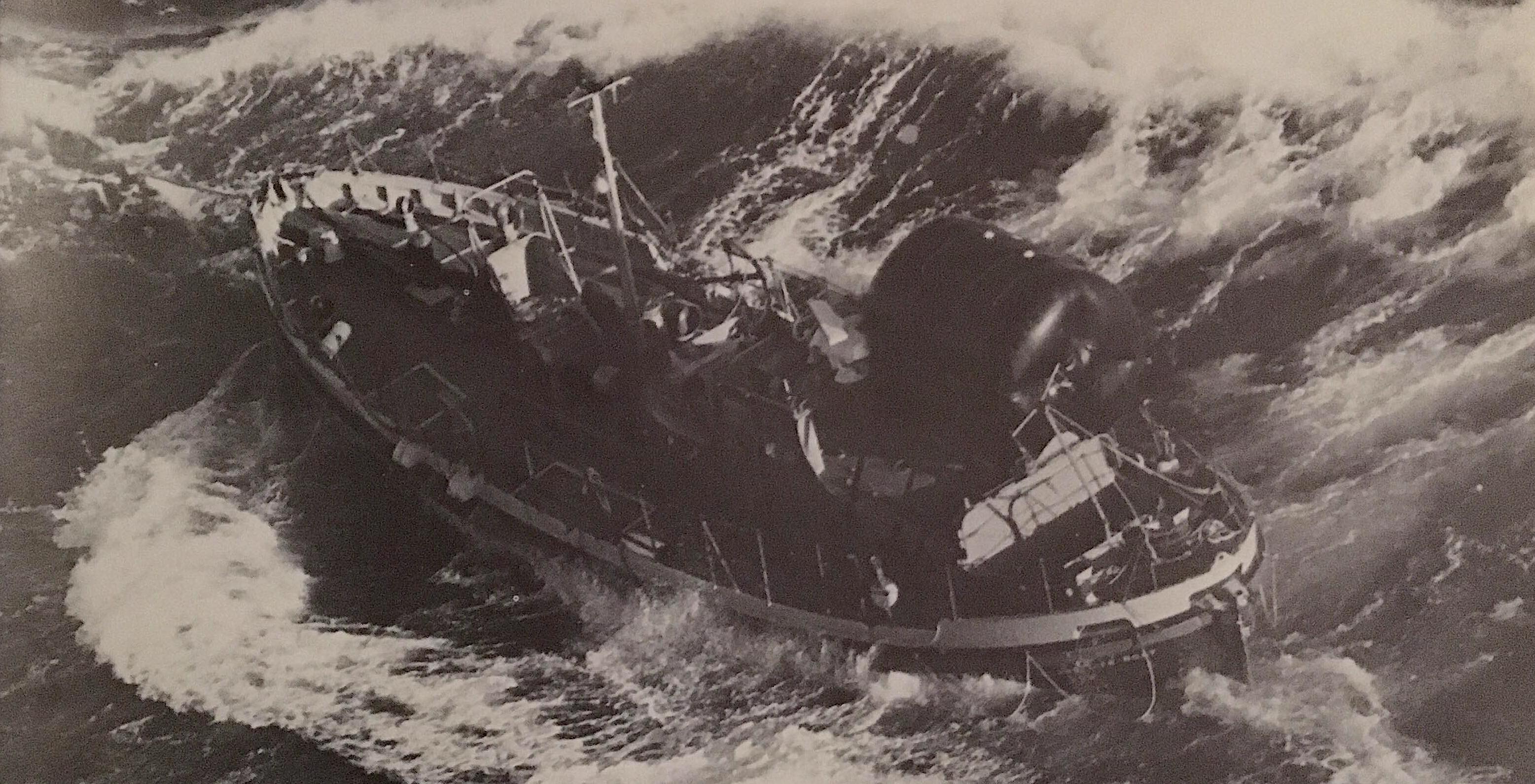 The family of a Barra RNLI lifeboatman have pledged to make 2019 the year that he and his crewmates get the recognition they deserve, 40 years after a shout where the whole crew nearly lost their lives.

Lifelong RNLI supporter and fundraiser Christine Macintyre has just (December 11th) received a promise from the RNLI that the crew of the 1970s lifeboat R A Colby Cubbin No.3 will be recognised, with a plaque on the future lifeboat station due to be built in Castlebay.

But she still believes that individual RNLI medals should be awarded to every man in the crew of eight, in recognition of exceptional service on the night of November 18th 1979.

Christine comes from a family with lifeboats in the blood. Her grandfather, John MacNeil, died as a result of a lifeboat shout in 1942. Her brother and husband both took their turn on the lifeboats and her son has only recently left the Barra crew, while her daughter still serves as a crew member for the RNLI in Portrush, Northern Ireland.

But it is Christine’s father John MacNeil (Iain Beag) who she wishes to see remembered in 2019. He was one of seven crew members who responded when rockets went up, just after midnight on Sunday November 18th 1979, during a vicious storm. The call was to aid a Danish coaster, Lone Dania, which had issued a distress call. Although she was only seven years old at the time, Christine vividly remembers the shout.

“We all had our jobs to do when the rockets went up. Mine was to fetch my Dad’s boots and my brother Archie was to fetch his socks. We all ran to our tasks and my Dad got dressed and ran down the road to the lifeboat. That was the last we knew until we were in church that day and the priest said prayers at the altar for the lifeboat crew. We all looked at each other, wondering what was amiss, and when we left the church we could see the RAF helicopter. That was a really unusual sight and we knew, then, that something was wrong.”

The 52ft Barnett class lifeboat had capsized at 3.46am, in mountainous seas on her way to the casualty vessel. As she went over, the eight crew members were drenched by the waves – they had opened the wheelhouse door to try and discern the lights of Skerrymhor lighthouse through the seas.

The situation could have been disastrous, but the R A Colby Cubbin No. 3 had an innovative self-righting system, a huge air bag that inflated on capsize. It was the first real-life test of the equipment anywhere and it worked. The lifeboat righted herself and the men scrambled to their feet, expecting to continue on their way to the casualty.

That was not to be. Ropes stored in an open bin on the deck had tumbled into the sea during the capsize and now fouled the propeller. Christine’s father John MacNeil and others tried to cut the rope free, but could not. The lifeboat herself was now unable to make progress and at the mercy of the wind and waves.

Soon there was an RAF helicopter overhead and four injured crew members, including Christine’s father, were airlifted to the football pitch in Castlebay. There a local doctor checked them over and sent them home.

The lifeboat herself was towed back to Castlebay by an Eriskay trawler, the Sapphire, skipper Donald Mackinnon. ‘Hurricane Dan’, as he was known, kept a thank you letter from seven-year-old Christine for the rest of his life and she now has a copy returned to her. It reads:  “Dear Captain Mackinnon, thank you for saving my father and thank you for your crew for coming out to the rescue and thank you for coming out in the wind to save the crew of the Barra lifeboat and to take them out of the water. Thank you for answering the SOS. Christine and Archie.”

On the afternoon of November 18th 1979, within Castlebay, the MV Notre Dame took the lifeboat in tow and back to Ardveenish pier, where the remainder of her crew disembarked wearily at 3.30pm – 15 hours after they were called and 12 hours after the capsize.

Christine says: “They had a hot drink and went to bed. Nobody ever talked about it afterwards. It’s amazing how matter-of-fact they all were about the shout – even the report sheet for the RNLI just says ‘performance satisfactory until capsized at 03.30am.’”

In fact the incident was remarkable for many reasons. The Islay lifeboat, a Thames class called Helmut Schroder of Dunlossit, had also been called to help and she, too capsized at 1.45am, righting herself with a different type of system involving a watertight superstructure.

Former Stornoway lifeboat crew member John J Maclennan said: “It was the first time that either of these classes of lifeboat had capsized on service and the RNLI inquiry found that there was ‘no failure of the lifeboats or their equipment’. The inquiry referred to the seas and weather conditions as ‘diabolical’, winds up to force 12 and the significant height of the waves around 30 feet, with a 10 per cent chance of seas reaching 60 feet. The Islay lifeboat coxswain said the weather was as bad as he had experienced in 17 years in the lifeboat service.”

Yet despite the risks they took and the extreme conditions, none of the crew from Barra or from Islay were ever recognised for the arduous service. When Christine Macintyre took up the campaign to see the surviving crew members honoured, she was told by the RNLI that the men were not eligible for medals as they had not reached the casualty vessel.

Christine said: “Since then, we’ve learnt that the RNLI Bronze Medal is awarded not just to heroic crew members, but to fundraisers, lifeguards and flood rescue teams. None of these put lives at risk in 30-60ft seas and hurricane force 12 winds and we see no reason why our crew shouldn’t be awarded at least a bronze medal.

“We believe these crewmen should be honoured. All eight of the crew that night could have lost their own lives – they did turn out in horrendous conditions. If the rope hadn’t caught the propeller they would have reached the casualty. There was no lack of valour or intention.

“The open rope bin on the deck was shown to be a design fault and, following our capsize, a cover was applied to the rope bins on all self-righting lifeboats, to prevent the ropes coming loose.”

Only three of the R A Colby Cubbin No 3’s crew that night now survive – recently retired lifeboat operations manager Roddy Maclean, Joseph MacLeod and Michael MacNeil – and Christine is determined to see them recognised.

This month (December 2018) she finally heard from the secretary to RNLI chairman George Rowlinson that a memorial plaque would be prepared for the new lifeboat station, to be made ready in time for the 40th anniversary in November 2019.

Despite her pleasure at that good news, Christine still wants to see more support – for the men, for the RNLI and for the new lifeboat station. She said: “I have a scale model of the R A Colby Cubbin No 3 and, when I took it along to a school fair, a lot of our own youngsters didn’t know the story.

“I want more people, especially young people, to recognise and support the RNLI in Barra and our own lifeboat station. We were supposed to have a new lifeboat station opened in 2019 and the work has not started yet, so 2022 is the earliest I could imagine.

“I would like to see the plaque in place on a thriving new lifeboat station and I would love to see medals awarded to our men and those of the Islay lifeboat. They were an amazing, hardy generation and 40 years is a long time to wait. I only hope we can finally do them justice.”

Pictures show: R A Colby Cubbin No 3 under tow on November 18th 1979 (taken from the RAF helicopter). The inflated airbag can be seen clearly. 1970s postcard image of the lifeboat beside Kisimul Castle (John J Maclennan). Christine Macintyre today with a scale model of the R A Colby Cubbin No 3 and a detail showing the open rope bin on the deck, Christine’s father John MacNeil welcoming the new Arun class lifeboat Ann Lewis Fraser to Barra in 1988 and the crew’s report on the incident from 1979. (Christine Macintyre). 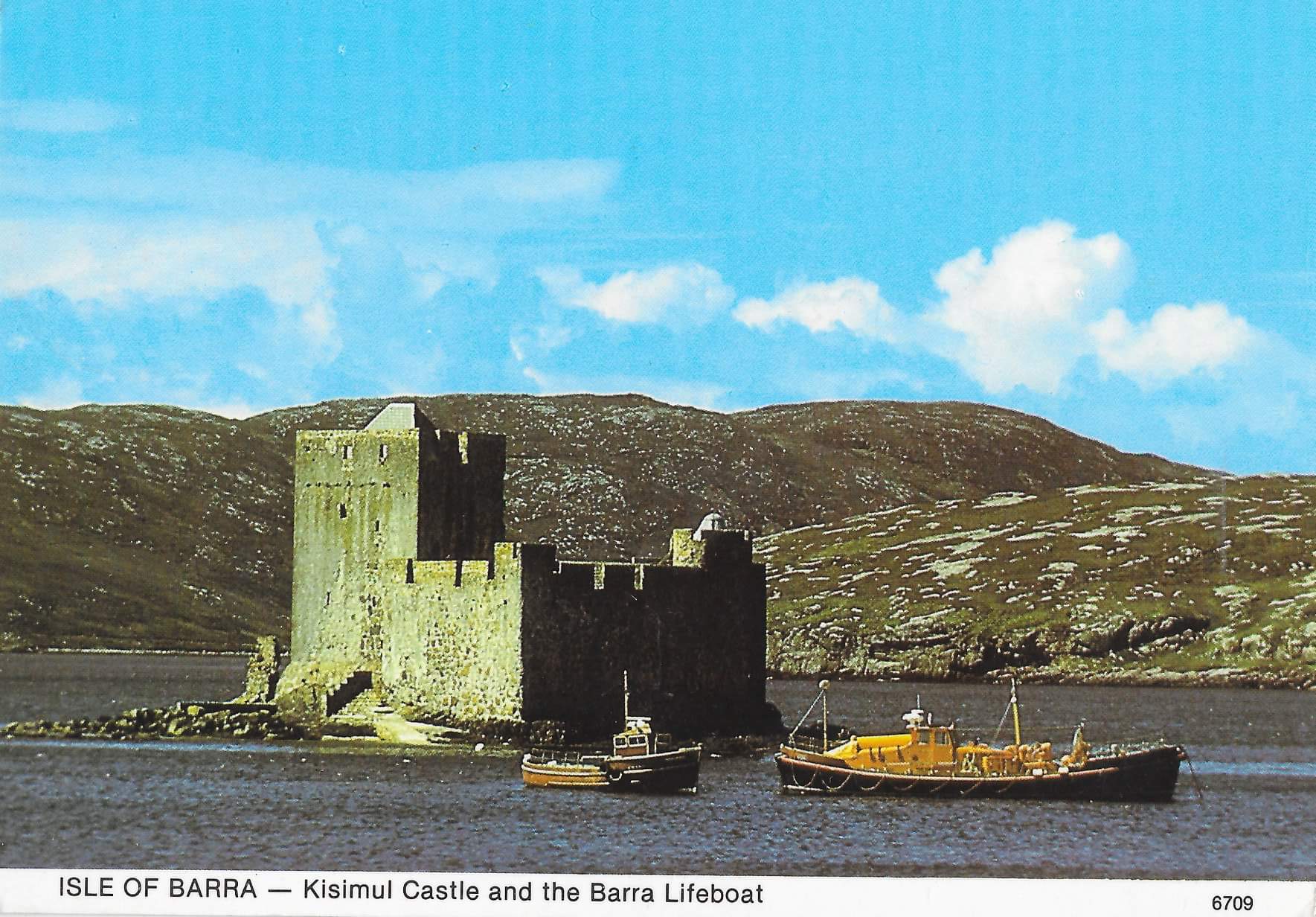 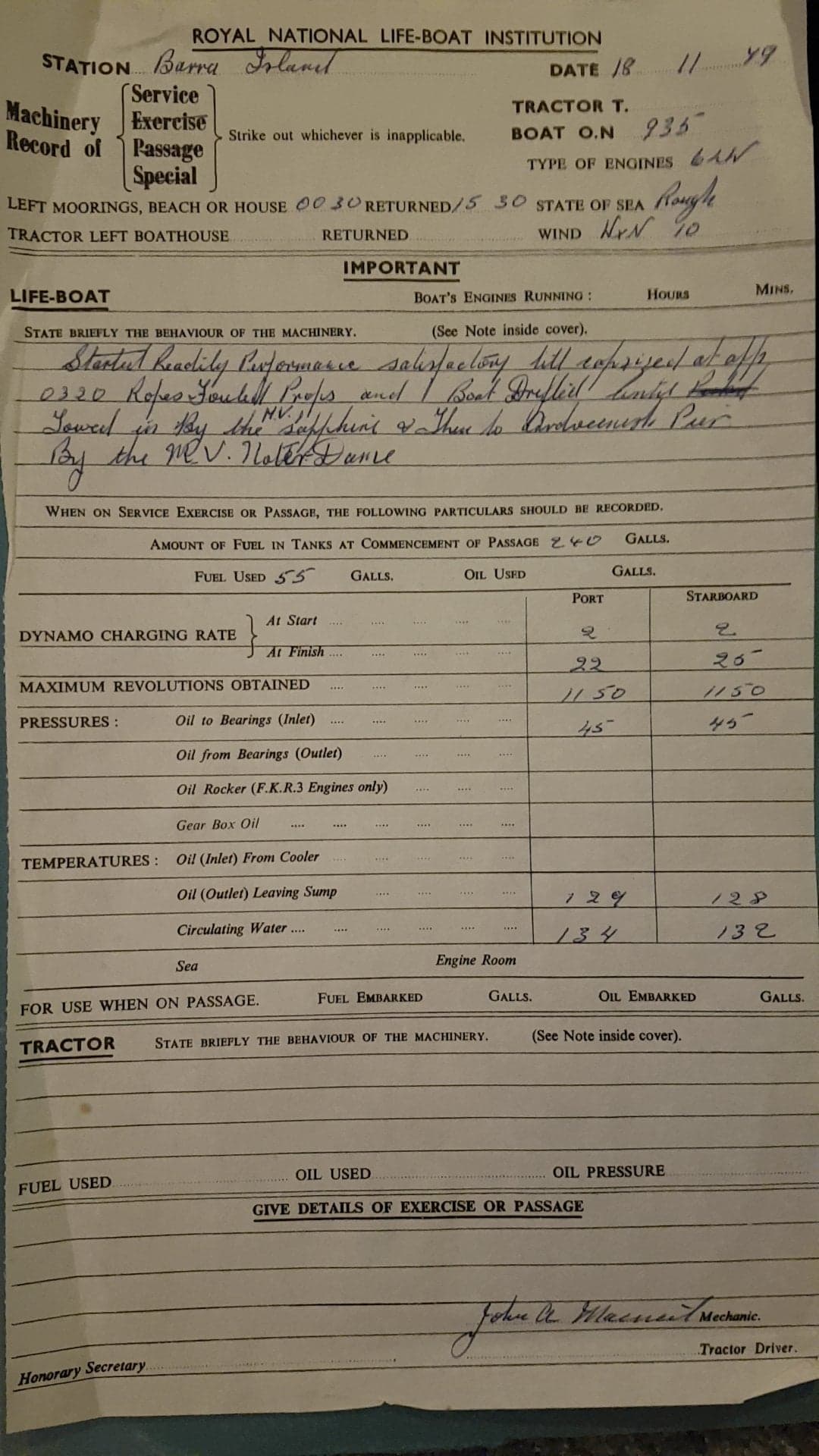