All dressed up and ready to go! 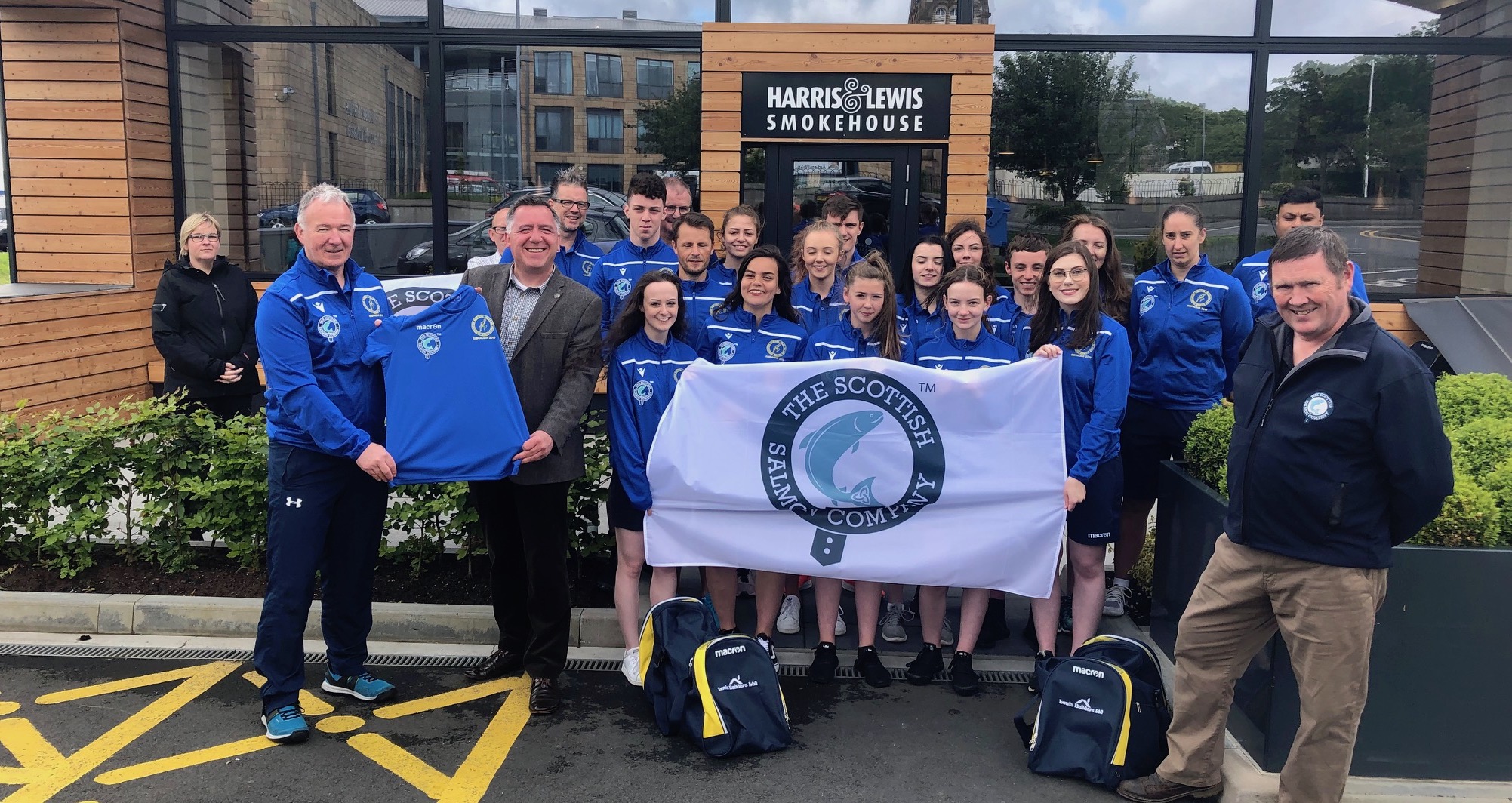 The Western Isles Island Games Team donned their team colours for the first time today (Monday July 1st) at a send-off event hosted by their sponsors at the Harris and Lewis Smokehouse.

The kit, packed into individual kit bags for each athlete, was presented by the Scottish Salmon Company, who are sponsoring the team for the fifth consecutive year, reaffirming the company’s commitment to the communities where they work and the health and wellbeing of the islands’ people.

Now ready for their trip to Gibraltar are 34 athletes, who will be travelling out on a charter flight on Saturday, together with eight team coaches and managers, two physiotherapists and a posse of supporters and family members.

Craig Anderson, Chief Executive of The Scottish Salmon Company, said: “With just a few days to go until the start of the games, the arrival of the WIIGA team kit is another exciting milestone for the athletes as they prepare to travel to Gibraltar. We wish all the athletes taking part the best of luck in the Gibraltar 2019 International Island Games XVIII.”

Norrie MacDonald, WIIGA Chair, said: “The kit looks fantastic and provides a real feeling of identity for the athletes. We are so grateful to The Scottish Salmon Company for their continued sponsorship of the association.”

“All our athletes have worked incredibly hard to prepare for their events. The NatWest International Island Games is a major international event with many Commonwealth Games athletes and also some Olympians competing. It is an incredible experience for all those taking part and we can’t wait to get out to Gibraltar.”

Gibraltar is the host island for the 18thNatWest Island Games, the eighth that has seen a team from the Western Isles competing. They’ll be up against teams from as far afield as the Cayman Islands, Bermuda, the Falkland Islands and Greenland, as well as more familiar opponents like Orkney and Shetland.

Among what team manager Iain GG Campbell describes as a relatively young team is veteran Eve Carrington, who has been at every games since the Western Isles began competing. She will compete in the shot put and hurdles events, and is also the assistant team manager.

The youngest competitors from the Western Isles are Beth Macphail, 14, who is in the first badminton team ever entered from the islands in this tournament, and swimmer Sophie Smith, also 14. She’ll take encouragement from multi-medallist Kara Hanlon, who was swimming at her first games in 2011 at the age of 14 and is now competing for her home islands at her fifth games.

After today’s send-off reception, the team will next gather in full early on Saturday morning, when they’ll have a team picture taken outside Ionad Spòrs Leodhais before heading off to the airport. A specially chartered flight will take the 59-strong cohort directly to Gibraltar, where they’ll be accommodated in a group of newly renovated homes at a former army base, transformed into Gibraltar’s Games Village.

They’ll participate in the Games opening ceremony from 7pm on Saturday and will then be in continuous action throughout the whole event until the close on Friday July 12th.

Western Isles’ first competitive events are on Sunday (July 7th) when first-time cycling competitor Kevin Smith goes in the men’s individual town criterium and there are competitions in athletics, badminton and shooting. There’s a chance of medals early on, with long jumpers Angela Horne and Heather Mackinnon and cyclist Kevin Smith all competing in single-round competitions.

You can follow results and competition information, by going to https://www.gibraltar2019results.comor following Western Isles Island Games Association (WIIGA) on Facebook at https://www.facebook.com/WIIslandGames/

Live film coverage of every event is being provided by Gibraltar Broadcasting Company (GBC) at https://www.facebook.com/gbc.giand BBC Spors Gaidhlig will be providing coverage throughout the week.