Workshops to get women into politics 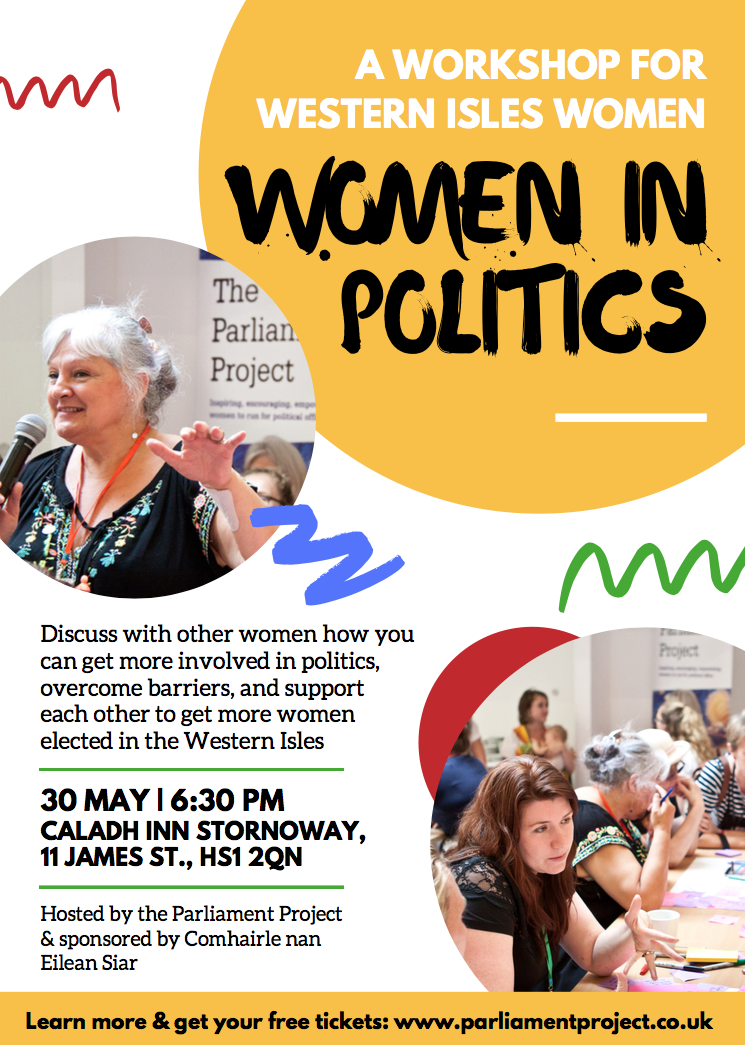 There are currently no female councillors elected to Comhairle nan Eilean Siar so in a bid to invite more Western Isles women into politics, CNeS is holding workshops in Stornoway and Benbecula at the end of this month.

The Comhairle has never had a female Leader or Convener.

In earlier council eras, there have been women chairing committees, or serving as vice-chairs.

The previous Comhairle saw Zena Stewart, Catriona Stewart and Catherine Macdonald involved.  However, the last woman's involvement ceased during the last election in 2017.

The two workshops aim to help women begin their journey into politics.

The Stornoway workshop will be held on Thursday 30 May at the Caladh Inn from 6:30pm to 8:30pm.  More information can be found here.

The Benbecula workshop will take place on Friday 31 May at An Caladh in Balivanich from 6:30pm to 8:30pm.  More information can be found here.

Tickets for both events are free and no political experience is necessary.

The workshops are provided by the Parliament Project which is a non-partisan initiative that seeks to inspire, empower and encourage women to run for political office in the UK. It runs information and skills building events and offers peer networking to support women to get elected. Since summer 2016, the Parliament Project has delivered workshops to over 3000 women in Scotland and England many of whom have gone on to stand for election.

The Women into Politics workshops will focus on allowing women to share their political ambitions, get information on different political roles available to them, hear from a previous female Councillor about her experiences and explore barriers to entry that are unique to the Western Isles. These events are open to all women.

Lee Chalmers, Founder and Co-Director of the Parliament Project, said: “We are delighted to be coming to the Western Isles. There are huge numbers of women out there who could be getting ready to run for office; we meet them every day - yet women make up only 36% of the Members of the Scottish Parliament and 24% of the councillors.

"The Parliament Project is a confidence-builder, a safe space for women of all political colours and none, to explore and develop their political ambitions in a workshop setting which inspires participants to build networks, affirm personal goals and develop the skills required to stand for elected office.”

Derek Mackay, Democratic Services Manager, said: “I would encourage women interested in politics or representing their communities to go along to one of these workshops. We would like to see a more representative local authority and indeed across the public sector.”

Additional information has been added since this was first posted.