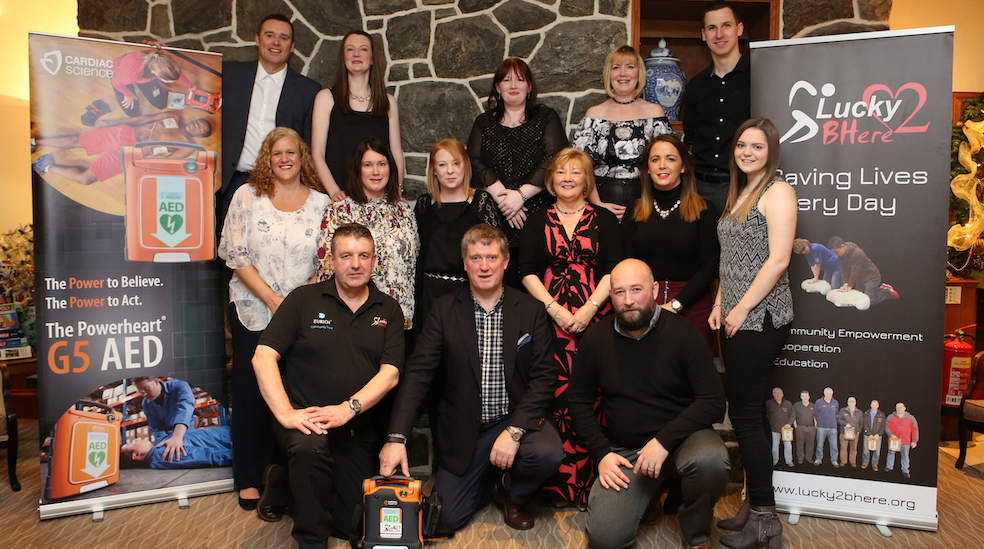 Four years ago today, on January 28th2015, Angus Morrison of Balallan suffered a heart attack. More fortunate than some, he survived the traumatic experience and started thinking what could be done to get help quickly to people in a similar situation.

For Angus, Councillor for the Uig and North Lochs District, that moment was life-changing in more ways than one. It set him off on a quest to ensure that easy-to-use life-saving equipment could be made readily available in public places and it set in motion a shift in thinking that would touch people all over the Western Isles.

Automated External Defibrillators (AED) are portable electronic devices that automatically diagnose life-threatening cardiac changes and can treat through defibrillation – electrical therapy which allows the heart to re-establish an effective rhythm. They're simple to use and cannot harm the casualty or the person using the device.

"You never know when someone is going to collapse from a cardiac arrest," said Angus. "The first few minutes in that situation are vital to increase their chance of survival. Not everyone can be saved by using a defibrillator, but we thought if we could save just one life by having them available, it would be worth it."

Angus and Roddy Macdonald, paramedic at Scottish Ambulance in Stornoway decided to set up Lucky2Bhere Eilean Siar, a branch of the Skye-based charity that has trained and set up teams all over the north of Scotland. The Eilean Siar branch was established in March 2016, when a number of local volunteers were trained to deliver emergency life support training.

Angus told welovestornoway.com: "When the Eilean Siar team started three years ago, there were seven AEDs in the Western Isles – now there are 123."

And it’s not just that all those defibrillators have been installed. Thousands of people, including children throughout the Western Isles, have received training in how to administer CPR and the use of a defibrillator, with Lucky2Bhere providing the training and installation advice.

There is now a defibrillator in every school in the Western Isles, supplied by Lucky2Bhere, a tremendous achievement in itself. The defibrillators are located outside the school, so they can be used during term time and at the same time be available to the community outwith school hours. All are accessible 24/7 for any sudden need.

The UK has an expected out-of-hospital survival rate from cardiac arrests of 7%. Meanwhile in Scandinavian countries, where every child is trained how to administer CPR and use a defibrillator, the survival rate is far higher. The Western Isles now have the best take-up rate of community-located AEDs anywhere in Scotland, with as many in the Broad Bay area alone as there are in the whole of greater Inverness.

Angus said: "I get enquiries every week about emergency life support training and the supply of defibrillators. February installations are scheduled for Garrabost, Rhenigidale,  Maaruig, and Vatersay.

"When we first discussed putting defibrillators into schools and at locations throughout the Islands, the issue of vandalism was raised. However, to date, not one defibrillator has been tampered with, an indicator of their value to communities.

“As well as the many people who attend community training sessions, every child from P5 upwards in the Western Isles is shown how to administer CPR and how to use a defibrillator. It gives us great satisfaction working with children and seeing the confidence they have in using a defibrillator. We emphasise the importance of the life-saving equipment to the children, as well as the fact that they could make the difference in saving the life of a friend or relative.

"My initial hope was to get defibrillators into my own local villages in Kinloch – Balallan, Laxay, Keose and Aridhbhruaich.  By the end of February there will be 126 from the Butt to Barra, with more still to come."

In October 2018 75-year-old John Burgis of Port of Ness became the first person whose life was saved by one of the Lucky2Bhere devices in Lewis, because an AED was available when he suffered a cardiac arrest at his home. That 'just one life' target has been met and every life saved from now on will confirm the success of the work of the Eilean Siar Team. Lucky2Bhere defibrillators have been used, with good outcomes, four times throughout the Highlands and Islands over recent months, increasing the survival rate statistics.

You can find a map of the location of every AED in the islands, together with contact details and information on how to learn more, at https://www.lucky2bhere.org/live-aed-map/ and there's also an app available via the Lucky2BHere website.

Pictured are the Lucky2BHere Eilean Siar Trainers along with representatives from Cardiac Science and Ross Cowie, founder of the charity. Councillor Angus Morrison is front, centre.