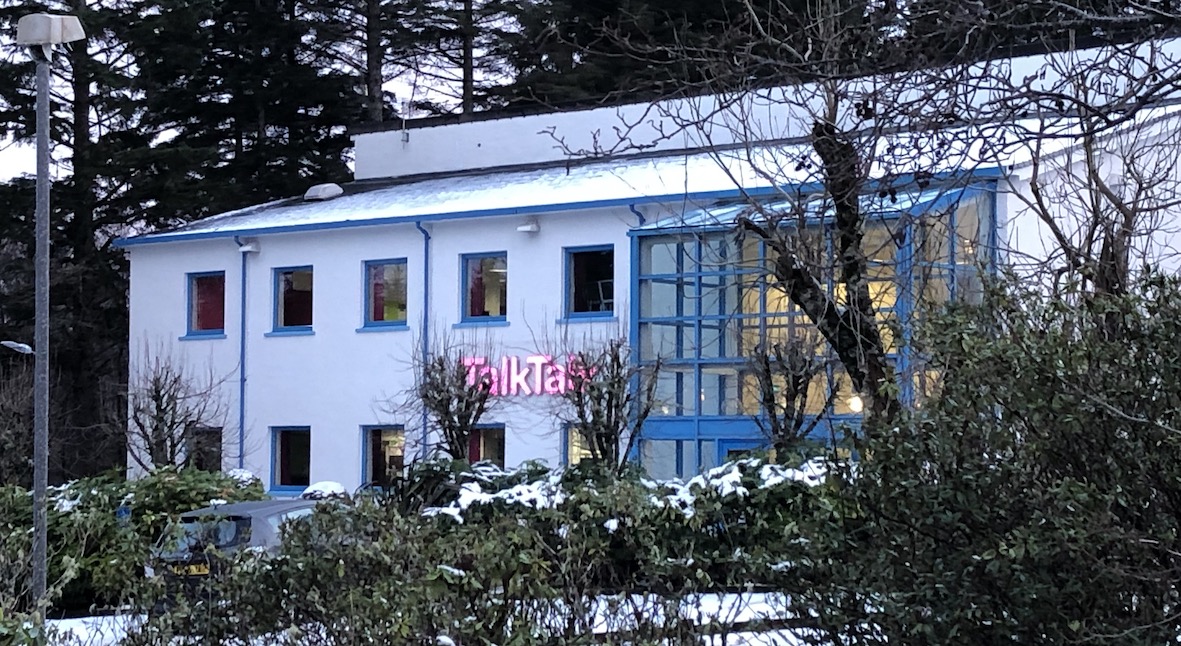 A total of 59 island employees of the broadband services provider TalkTalk have today (Wednesday January 30th) been given notice of redundancy.

Staff received the shock news that the Stornoway call centre is to close at the end of July, with all jobs moving to the mainland.

It’s reported that the jobs will be relocated to Manchester and staff have been offered a relocation package or enhanced redundancy.

TalkTalk has had a presence in the Western Isles since 2005, when Carphone Warehouse acquired Onetel from Centrica.  They became one of the largest private sector employers on the island. The call centre at the Gleann Seilach Business Park on Willowglen Road was upgraded as recently as 2012, when 25 new jobs were created.

The profile of work handled in Stornoway has moved from routine call-centre work towards high-level complaint handling, including sensitive issues such as bereavement support services, with a workforce that the company has previously described as ‘mature and motivated’ drawn from the island community.

TalkTalk has been welcomed as a supportive employer, with staff benefits including an annual away-day, when island employees are flown out on a chartered plane to a different destination each year.

Staff are also supported in charitable work and personal challenges and TalkTalk was the first corporate partner in the Slainte Mhath health and fitness membership scheme at Ionad Spors Leodhais.

In 2017 new jobs were created in Stornoway as the company cut jobs at mainland call centres. TalkTalk said at the time that it was investing in developing its Isle of Lewis base, “upskilling the team and reviewing salaries for employees”.

Reacting to the news, Alasdair Allan MSP said: “Today’s news is deeply troubling, and my thoughts are with the staff and their families at what will be a very difficult period for them.

“Since being informed of the company’s intentions earlier this afternoon, I have spoken to HIE and have asked the Scottish Government’s Business Minister, Jamie Hepburn MSP, what the Government can do to help in this situation.

“This is a site that has operated in one form or another for almost 20 years and it is important that all options are now explored to try and ensure its future.”

Angus MacNeil MP said: “Having spoken with TalkTalk, it is obviously disappointing to hear that they have taken this step.  TalkTalk acknowledge that they have highly skilled staff in Stornoway, dealing with complex customer complaints.

“This will be affecting 59 people in total and will be devastating for them.  However, I would also like to take the opportunity to flag up to other companies that there is the potential to employ 59 highly capable, highly trained conscientious staff and who have been one of the best operators in TalkTalk.

“What TalkTalk are doing is essentially centralising around Salford, Manchester.  They will not be talked out of that decision it appears.  I am not sure what might happen in the future but we clearly have to flag up that there is an opportunity for another company who want to have such highly trained staff to gain from this situation.

“Meanwhile, our thoughts are with the employees and families affected.  This is obviously a very difficult situation and alarming news for them.”

Comhairle nan Eilean Siar has called on the Scottish Government to intervene in the TalkTalk proposals for the transfer of its Stornoway operation to Manchester.

The Comhairle has written to Paul Wheelhouse, Minister for Energy, Connectivity and the Islands, stating “Given the fragility of the local economy and the detrimental impacts that these losses will have are there any additional and specific supports that the Scottish Government can offer?”

Talk Talk has confirmed that they are transferring their Stornoway operation to Manchester with the loss or transfer of 60 jobs.

Councillor Donald Crichton, Chairman of the Sustainable Development Committee, said: “This is a significant blow to the economy of the Western Isles. Our immediate thoughts are with the employees of the company and their families and we will play whatever role we can in supporting them.

"We anticipate that the Comhairle, together with our partners in SDS and HIE, will be implementing PACE (Partnership Action for Continuing Employment) procedures. However I also believe that the Scottish Government can and should play an active role and do what they can by way of supporting the employees and I am sure all the local agencies would be pleased to work together with the Government and the company”.

The Comhairle has emphasised that in a city location such as Glasgow the equivalent scale of job losses would be more than 3,000, resulting in a major and significant impact on the local economy.

Highlands and Islands MSP Donald Cameron said: “This news will be a devastating blow to the 59 employees and their families. A loss of skilled jobs on this scale is very problematic, and I hope that bodies such as Highlands and Islands Enterprise and the Scottish Government can actively assist local people to find new work, and to encourage new businesses to invest in Lewis.

"If anyone requires any immediate assistance, I would encourage them to contact my office and I will do all I can support the TalkTalk employees and their families at this worrying time”.

SNP MSP for Na h-Eileanan an Iar, Alasdair Allan, has used First Minister’s Question Time at Holyrood today to ask the First Minister what can be done to help the 59 people in the Isle of Lewis who were yesterday told that they would be losing their jobs at the TalkTalk call centre in Stornoway.

Alasdair Allan asked First Minister Nicola Sturgeon:“To ask the First Minister what the Scottish Government can do to assist the workforce of the TalkTalk call centre in Stornoway who have just learned that they are all to lose their jobs this summer.  The First Minister will appreciate that 59 job losses leaves a very big hole in a small self-contained island economy, perhaps comparable to 1,800 job losses in Glasgow. Can I urge the Scottish Government and its agencies to do everything possible now to seek alternative options as well as to help these workers and the wider community.”

The First Minister responded by saying:“I was very concerned to learn of the developments at Talk Talk in Stornoway yesterday and the impact this will have on the employees affected, as well as on the local community and the local economy.

“Our agency Highlands and Island Enterprise is already in direct contact with Talk Talk both at local and national level and we are committed to doing everything possible to address this situation urgently in the hope of obtaining a positive outcome.

“Of course,  in the unfortunate event of individuals facing redundancy, we stand ready to provide support through the PACE initiative, but of course our first priority is to explore all options for avoiding redundancies.   I know the Economy Minister will be happy to liaise with further with Alasdair Allan about the action we’re taking and any further action that it is considered the Scottish Government and our agencies could take.”

Alasdair Allan commented afterwards: “The situation of the TalkTalk workforce in Stornoway is a very unhappy one, and it is a major disappointment that the company have acted in this way. This is a skilled workforce who deserve a future in the islands.  I appreciate the First Minister talking a direct interest in this matter. I will continue to be in touch with HIE and other agencies to see if another company can be found to make use of those skills.”