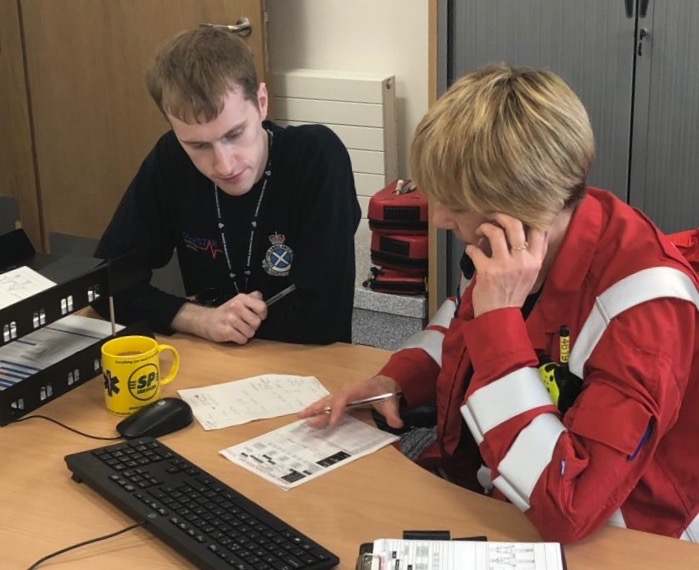 Paramedic speaks of ‘hardest rescue ever’

A paramedic from Tong is flying back to work in Aberdeen this evening (Friday January 10th), just days after saving the life of his step-uncle, in what he has described as the hardest emergency he’s had to deal with.

Chris Morrison was unexpectedly called into action as he headed home to visit family, when Iain Mackay of Point suffered a cardiac arrest during a flight to Stornoway at the height of Tuesday’s storm winds.

Chris, 28, is a paramedic and specialist practitioner with the Emergency Medical Retrieval Service (EMRS North) at Aberdeen airport, providing an emergency service across the North of Scotland including to the islands in Orkney and Shetland.

He’s also a registered nurse, a special constable, a trained Red Cross volunteer and a responder with BASICS Scotland, the British Association of Immediate Care, whose members are ready to jump into emergency situations wherever they are and without notice.

That’s exactly what happened on Tuesday’s flight, as pilots battled to land the plane and contemplated turning back to Inverness rather than bringing the Loganair flight down on Stornoway’s storm-battered runway.

Chris told welovestornoway.com today: “In my job we specialise in retrieving people in emergency situations using either the Coastguard chopper or the fixed-wing ambulance plane, so I am quite used to difficult conditions and to turbulence and bumpy flights.

“I was in the front row and was dozing, but I noticed a few people were being sick and that the air steward was not only busy but looking concerned, so I asked her if I could help and she said ‘can you check on that passenger.’

“Iain was three rows behind me and was quite unwell. He spoke to me and, because I know that he is diabetic, I thought he might be becoming hypo-glycaemic and went to get him a sugary drink.

“But when I got back to him he had lost consciousness, had no pulse and had stopped breathing. In the past few weeks Iain has lost a sister to cancer and his mother has passed away, so I just thought ‘This family can’t lose someone else’. I was ready to fight with every fibre of my body to keep him alive.”

Chris dragged Iain from his seat and onto the floor of the plane, beginning CPR and mouth-to-mouth breathing as shocked passengers looked on.

Loganair cabin crew brought out the on-board defibrillator. As luck would have it, another passenger on the flight was senior charge nurse Frances Robertson of the surgical ward at Western Isles Hospital. She, too, stepped forward to help with defibrillation.

“Frances was excellent help,” says Chris. “We delivered one shock and then his heart went into a non-shockable rhythm. The air steward went to the telephone to speak to the pilot so Frances continued CPR and I went and said to the steward: ‘Tell the pilot this is a category-A emergency. He must land the aircraft and there must be an ambulance there when we arrive.’

“Shortly afterwards the pilot announced that we would be making an emergency landing and everyone must be prepared to adopt the brace position. The air steward went and strapped herself in while we continued CPR on Iain.”

Working on the floor of the aircraft as pilot Rich Slack navigated a hazardous emergency landing, Chris and Frances continued to keep Iain alive. As soon as the doors could be opened the first rows of passengers were evacuated and airport fire staff came aboard with lifesaving equipment.

“When the fire crew came aboard we shocked him again and managed to get an airway established and a cannula (intravenous line) in. The ambulance had arrived by then and the crews started to extricate Iain from the aircraft, which was challenging in the confined space.”

After Iain had been whisked off to Western Isles Hospital by Scottish Ambulance, the rest of the passengers were got out of the plane and into the airport fire station, where they were given hot drinks before being taken to the terminal in groups of three.

Chris said: “I went to congratulate the pilots for the landing and they thanked me for my work, and then I took Iain’s bags and went up to the hospital. He was up in the High Dependency Unit (HDU) where I spoke with the consultant and told him what had happened, after which he was flown by Coastguard helicopter to the Golden Jubilee Hospital in Glasgow.”

Iain has now spoken to Chris by phone and found that he is well on his way to recovery. He had suffered a cardiac arrest after a stent, fitted during earlier surgery, became blocked. He’s now been fitted with an internal defibrillator.

Returning to work after a more than usually eventful visit home to the family, Chris is quick to claim that his professional skills saved the day.

“In my work we have to deal with amputations, cardiac arrest, transfusions and other emergencies in difficult locations and in the air, so in that sense I was very well equipped to deal with the situation.

“I even had my BASICS medical response kit with me – except that I had to check it in as baggage, so it was in the hold. But I had the additional drive of knowing all the family circumstances and feeling really strongly that I had to get this right.

“If I think about what could have happened I could completely go to pieces, but because I’m a professional I could handle it as a professional. I deal with cardiac arrests a lot, but this was one of the most challenging for me – technically, emotionally and physically.

“It was a difficult location, wedged in a narrow aisle in front of the public, who were all from my home island, working on someone from my own family and knowing what sort of a time they had been through. That was all going through my head. But I spoke to him today and he’s good and well – that’s the outcome I wanted.” 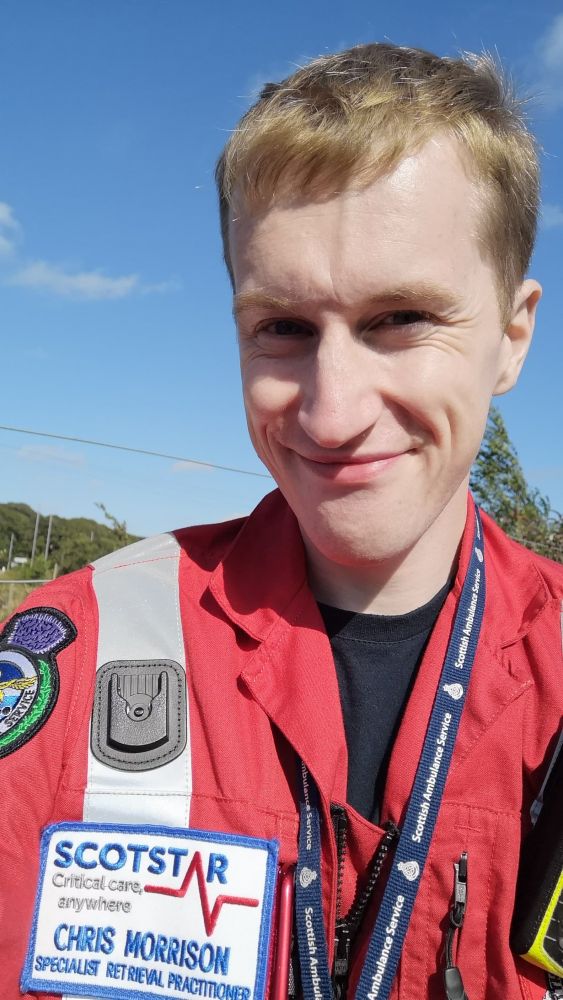