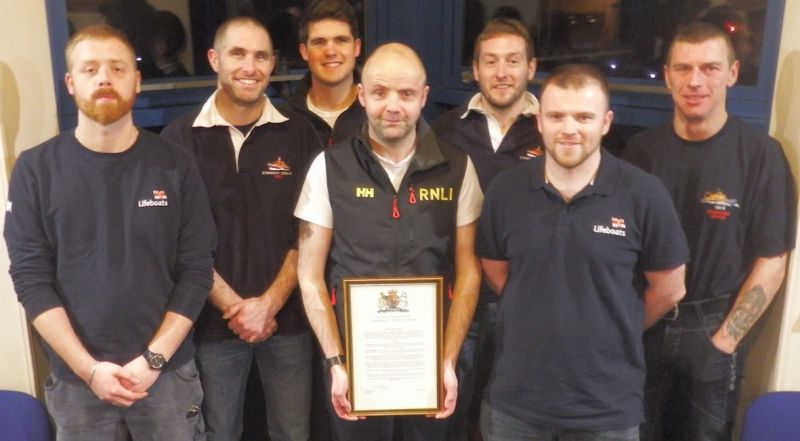 Volunteer crew members of Stornoway RNLI were awarded Letters of Thanks from the Institution - the first in 27 years - for a service which saw two lives saved amid 60 knots gusts and seven metre seas from a vessel disabled within the confides of Loch Shell, off Lemreway, Isle of Lewis.

Crew members Martin Murray (mechanic), John MacLeod, Ross Hall, Gavin Maciver, Norman Matheson and Ruaraidh Ferguson were presented Letters of Thanks from RNLI Chief Executive Mark Dowie; and Coxswain on the shout, David Mackinnon, a framed Letter of Thanks from the Council of the RNLI Chair, Stuart Popham.

Mr Popham wrote: “Throughout the service you and your crew exhibited first class seamanship and teamwork, while operating in appalling weather conditions and in the extremely confined waters of the loch. Please access my sincere thanks and appreciated for a superb service, in the very best traditions of the RNLI.”

Stornoway RNLI volunteer crew launched under the command of Coxswain David Mackinnon at 0005hrs on 3 November 2018, in response to a distress call received from a fish farm service vessel, Nitrox, with two persons on board.

The vessel was disabled due to a fouled propeller and in danger of being driven ashore in winds gusting to 60 knots, within the confines of Loch Shell.

During the 14mile transit south to the scene, conditions for the lifeboat were so severe, with 50 knot gusts, seven metre seas and driving rain with poor visibility, that speed was reduced to nine knots at times.

The Nitrox skipper had managed to make fast to another smaller vessel, attached to a mooring, which could have been insufficient to hold both vessels. Lying broadside to the full force of the weather, the situation was perilous when Stornoway RNLI lifeboat arrived on scene at 0210hrs.

With numerous hazards, confined manoeuvring room and danger of a nearby lee shore, the recovery of the Nitrox crew was extremely challenging.

The ‘Tom Sanderson’ RNLI all-weather Severn class lifeboat returned to Stornoway, arriving at 0340hrs, landing the casualties ashore into the care of the local Coastguard Team.

“We don’t shout about it; it’s a job and we go out and do it to the best of our ability. Thanks costs nothing, but it means everything, particularly when it’s recorded, and I’m delighted that the crew that night have been awarded Letters of Thanks from the Institution for such a tough shout.”

Coxswain David Mackinnon said: “It is thanks to the crew, this is all down to you guys and everybody working together. It’s testament to the training we do. It is fantastic for Stornoway RNLI crew to receive such an award, the first in 27 years.”