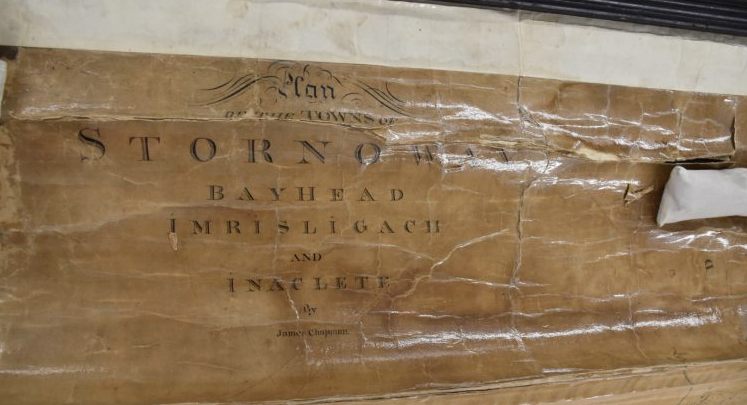 A 200-year-old map showing the town and port of Stornoway, including ‘Bayhead, Imrisligach and Inaclete’ is about to gain a new lease of life.

The map, made in the early 19th century by surveyor James Chapman, has been held in the collection of Western Isles libraries for many years. It shows the centre of Stornoway in fine detail, but conservation efforts over the years has damaged the map extensively.

Now a grant from the Aurelius charitable trust, which supports the conservation of culture inherited from the past, has allowed specialist conservators at National Library of Scotland (NLS) to start a painstaking process of restoration.

Beginning this week, the specialists will remove cellulose lamination, repair cracks and water-damage and re-mount the map before preparing it to be returned to Stornoway. It will then be digitised as part of a longer-term plan by Western Isles Libraries to allow historical sources to be widely accessed.

Western Isles Libraries Manager Kathleen Milne told welovestornoway.com: “We found it in very poor condition, so damaged we couldn’t digitise it because it had been lacquered and otherwise damaged.

“Because it was going to be a very complicated piece of conservation we needed support, and working with the National Library of Scotland is a great partnership. They’ve already digitised two maps for us and we’re really looking forward to developing an extensive website as part of our digitisation project.”

NLS began work on the Stornoway Map, as they are calling it, last month (September 2018) and have posted a detailed blog about the work they aim to do at https://blog.nls.uk/plans-for-the-conservation-treatment-of-the-stornoway-map/

Conservator Claire Thomson said: “The ‘Stornoway Map’ is one of a group belonging to Stornoway Public Library, which were sent to the National Library of Scotland in 2017 for digitisation. However, this map could not initially be digitised due to its poor condition. It had been heavily conserved in the past, leaving the paper stained, skinned and distorted, with many large cracks, tears and losses. It had also been entirely covered in cellulose acetate lamination, making its surface very glossy.

“The Library successfully obtained funding from the Aurelius Trust to undertake the conservation work necessary for digitisation, and the conservation project began in September 2018. Highlights of the treatment will be shown on Twitter (@NLS_CollCare), and we will also publish a second blog showing the map after treatment.”

Once restored, the map will become one of several which piece together the story of the town’s history. James Chapman visited the islands between 1807 and 1809, with a map of the Isle of Lewis which he created already in the NLS collection (https://maps.nls.uk/counties/rec/656).

And already on the Comhairle’s website is a plan from 1785 ‘of the Harbour Bay and Town of Stornaway with the Adjoining Lands.’

Kathleen Milne said: “Together with the earlier maps, this one will give us a fascinating insight into how the town and port of Stornoway have developed over the centuries.” 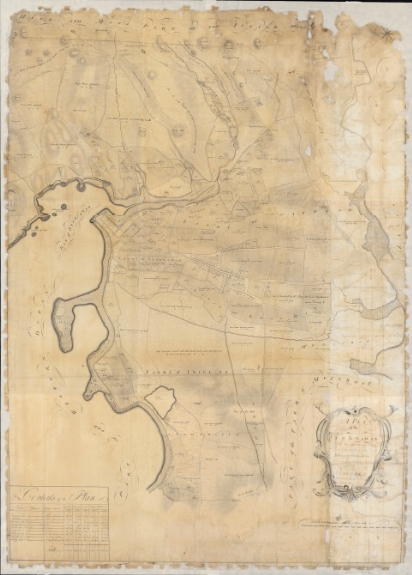