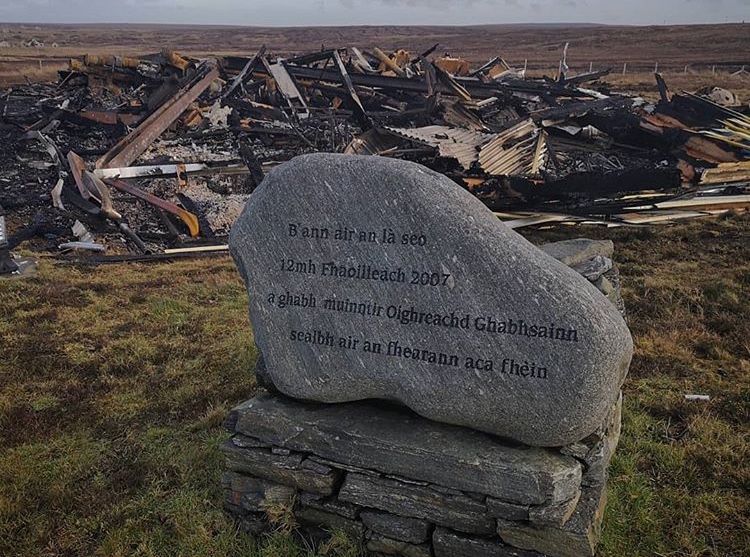 A surge of support from individuals and organisations has helped Urras Oighreachd Ghabhsainn (Galson Estate Trust) begin the long process of getting back to business.

The trust has shaken off the shock felt by employees, trustees and local residents, after a massive blaze completely destroyed their business centre and headquarters at South Galson. Their focus now is on getting back to work.

The 10-year-old business centre at Tom na Bà was found alight by a passing power engineer in the early hours of Friday (February 15th). More than 25 firefighters battled the blaze for hours in high winds, but by the time the flames were extinguished just a single gable wall still stood, and that was demolished for safety reasons soon afterwards.

But within hours of the devastating fire, Urras chair Agnes Rennie posted on social media: “The Urras will continue with business as normal” and the board has made good on that promise with the announcement today (Tuesday February 19th) that business is to be conducted from the offices of Highlands and Islands Enterprise (HIE) in Stornoway from this week.

Agnes told welovestornoway.com today: “The board met for the first time last night, after the events of last week, and we took some time to reflect on the enormity of what has happened. But the main part of the meeting was spent on agreeing a plan for a way forward.

“That will include working at HIE’s offices in Stornoway for this week and part of next, before making the transition into the Linux Centre in South Dell during next week. The centre was formerly used as a call centre and is large, open plan and well-maintained. The move will mean that we will be based in the community and fully functioning, with access to digital information exactly as before.”

The Urras is in no doubt that, despite the gravity of their current situation, it could have been much worse. Nobody was injured, as the fire took place late at night, and very little essential business information was stored in physical format.

Agnes said: “We lost a small amount of correspondence and some leaflets, but the vast majority of our records are in the cloud. There is no question that, if this had happened ten or 15 years ago, we would be looking at a much more serious situation in terms of business continuity.

“We need to get the Linux building equipped with telecoms and so on, but that is easily linked up and the amazing thing is that there has been so much support from people and organisations offering us space, buildings and equipment. All of these things have been offered and are there for us to use as required.”

Trustees have also been overwhelmed with good wishes, both personal and for the organisation as a whole. Agnes said: “Every community land trust in Lewis and Harris and others from places like Eigg and Applecross have been in touch. It’s very humbling to realise the strength of support that there is, and reassuring that the sector has the willingness to look out for each other. You can’t begin to put a value on that.”

Today’s statement said: “We are grateful for the support provided by so many and as a result we are now back up and running. We will be based in the HIE office in Stornoway for a week and will update later in the week with plans beyond that. The best form of contact is still email or via social media. This email address is being protected from spambots. You need JavaScript enabled to view it. The office phone has been redirected and we hope that too will be live soon. Please don't hesitate to get in touch as we are back to business as usual.”

Galson Estate Trust has been the community landowner of the 56,000 acre estate since January 2007. The business centre included their offices and those of the Ballantrushal wind energy project (Urras Energy Society) as well as office and retail space for rent, seminar and training rooms and other business services.