A giant of his faith and his culture 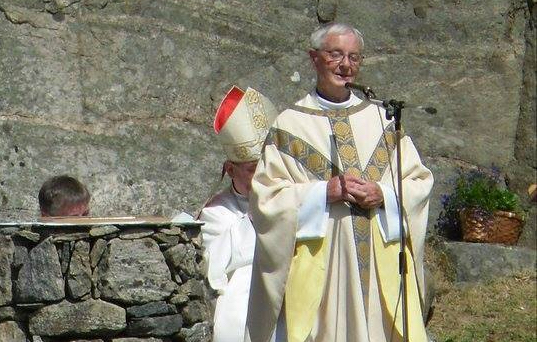 Canon Angus MacQueen, who has died at the age of 95, was a giant of his faith, his culture and of the communities he served throughout the Diocese of Argyll and the Isles over seven decades.

Wherever he went as parish priest, he left a mark not just on the spiritual life of his flock but also on the social and economic interests of places that needed leadership. His Christianity took intensely practical forms, embracing a multitude of projects and innovations, all for the good of the people, always leading by example.

He was steeped in the language and lore of the unbroken Hebridean Catholic tradition and deeply aware of the harsh history that had shaped the places around him. Such knowledge  was carried lightly and often invoked amidst much laughter to illustrate some thoroughly contemporary folly.

As a raconteur, he was brilliantly funny with an inexhaustible ability to find humour in the darkest of situations. Scepticism about all forms of authority or rank did not always endear him in high places, not least within the Church, but contributed richly to his stock of hilarious stories.

At one point in the 1980s, the then Father MacQueen annoyed his Bishop in Oban with some outspoken comments about community issues in the Western Isles. This – or so he believed – led to him being transferred out of Barra, first to Glencoe and then to the distinctly non-Gaelic parish of Rothesay.

Angus feared a long exile: “Hess is still alive,” he despaired when I called to commiserate. Of course, he was soon revelling in his new charge, having found the world’s largest collection of Gaelic books in Mount Stuart, redoubt of the fabulously wealthy, and Catholic, Bute family.

His remit also included Arran where the local estate had long frustrated the erection of a Catholic church. Angus rose to the challenge, found a crafty route round feudal superiority and built one in the middle of Brodick – an enduring monument to his ingenuity.

While a keen sense of the ridiculous was never far away, there was also a tough, serious side. More than most, he understood the value and fragility of his language and culture, as well as the society they had sustained. He was highly political, with a small ‘p’, in challenging forces which hastened the needless erosion of these inherited riches.

In this respect, his heyday was on Barra during the 1970s when he was parish priest at Castlebay and the equally formidable Father Calum Maclellan was in Northbay. It was a time of local government reorganization which brought the whole Western Isles within a single authority for the first time and highlighted the neglect of islands which had been under the remit of Inverness County Council.

Secondary pupils from Uist and Barra were scattered to a plethora of mainland schools from the age of eleven.  The small island of Vatersay (for which MacQueen had a particular affection) had no vehicular access while other transport links were basic.  There was no hospital or facility for the elderly on Barra. All of these battles were fought and won with transformational effect.

When the concept of community co-operatives (co-chomuinn) was introduced from Ireland in the late 1970s, the priests were at the forefront of ensuring that their island parishes took advantage of the opportunities. Wherever he went, Angus MacQueen carried these same enthusiasms and inspired action through his own unstinting involvement.

Angus John MacQueen (Aonghas Iain mhic Chuithein) was born in the South Uist crofting township of Baile Garbha, the son of John MacQueen and Kate MacEachan.   It was virtually a moneyless society and he recalled his upbringing as idyllic. Crofting families lived off their own produce and whatever land and sea bestowed. From this background, he acquired an intense love of nature in all its forms.

At the age of 13, he was sent off to Blair’s College in Aberdeenshire to follow the route which would lead him to the priesthood. It was not a smooth journey. At that time, there were too many trainee priests for the Scottish seminaries and Angus was among the overspill to Mill Hill in London.

An unauthorised outing to Madame Tussaud’s led to his expulsion, all forms of “theatricals” being out of bounds. He maintained that one of his companions, who avoided detection, later became Cardinal Thomas Winning. Angus lost his military exemption  and spent two years in the Army as the war drew to a close.

He then begged  Bishop Grant in Oban to be allowed to resume his priestly studies and was sent to St Edmund’s Ware in Hertfordshire with which he maintained lifelong connections. In July 1951, he was ordained and sent to his first parish, Morar, as curate to Father John MacNeil, a native of Mingulay. The new arrival’s duties included relating the day’s news to the aged, blind priest.

MacQueen loved Morar just as he quickly became committed to every parish in which he served – Dunoon, Eriskay, Castlebay, Glencoe, Rothesay, Bornish and finally Northbay in his beloved Barra. Well into his seventies when he returned to the island, he promptly turned over the land adjacent to the church for a market gardening project, staffed by people with learning difficulties.

An excellent cook using local ingredients, he became a regular broadcaster on matters culinary, cultural , historical and spiritual.  Some of his vast knowledge will be retained as he recorded a great deal of material including a four-part account of his life for BBC Radio nan Gaidheal in 2015.

He travelled extensively, not least to Ecuador where his Hebridean colleague Father Colin MacInnes had become a missionary priest working In a poor suburb of Quito. Back in the islands, MacQueen raised prodigious sums of money to support this work, just as for many other humane causes.

Father Colin said:  “He was a man of great imagination and creativity who relished the unusual and extraordinary. He sometimes gave the impression that he didn’t have a lot of time for religion but behind everything he did was a simple and deep faith”.

The picture is from the RC Diocese of Argyll and the Isles.