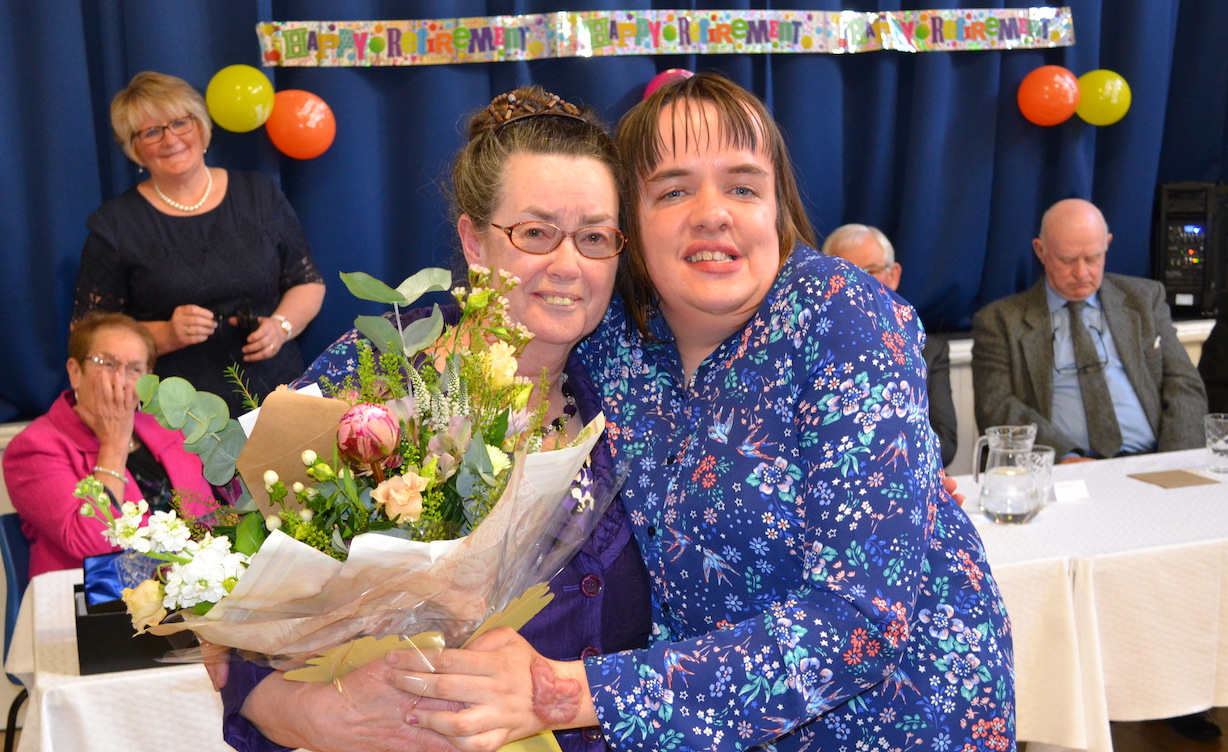 On Friday 21st June there was a large gathering in the Tarbert Community Centre to mark the retiral of Morag Munro as co-ordinator of Crossroads (Harris).

This was a role Morag carried out, unpaid, for 34 years following a year of hard graft to set the scheme up.

Such is the high regard people have for Morag, folk travelled from Lewis and all corners of Harris to attend this special occasion.

Dolly Maclean, Chairperson of Crossroads (Harris), was the MC for the evening, which opened with prayer by Rev Coghill of Scalpay Free Church.

Tributes were paid to Morag by Catherine Morrison (former Chairperson) who has been involved with Crossroads since its inception; Donald Martin, Lord Lieutenant of the Western Isles; and John Murdo Morrison, Tarbert.

A message received from Iain Macaulay, former Director of Social Work was read out by the MC.

Hamish Taylor read out a Gaelic poem he had written for Morag to mark the occasion before presenting her with a framed copy. Inspiration for the poem came from Matthew 25 v 40

Presentations were made to Morag by Ronnie Morrison, Treasurer – A monetary gift from the Community and some gifts from Crossroads (Harris) – an 8-seater picnic table, engraved crystal vase and a gift voucher for Harris Tweed Shop.

Ann Macleod, Meavaig presented her with flowers. Catherine Morrison gave John Munro a gift in recognition of his patience over the years whilst Morag took their car and spent many an evening attending meetings.

Morag expressed her gratitude before herself and John cut a specially made cake.

Dolly Maclean gave a vote of thanks and then called upon Rev Coghill to say Grace, before everyone enjoyed a sumptuous buffet, provided by the ladies of Bays Café.

Guests mingled amongst each other before the evening drew to a close with the singing of a Gaelic Psalm, presented by Hamish Taylor and a Prayer by Rev Donald John Morrison.

The community of Harris are indebted to Morag for all her hard work over the years, building up a service which has for the past 10 years scored the highest possible grades in all categories with the Care Inspectorate.

We wish her every Blessing for a very happy and well deserved retirement and extend our best wishes to Lisa Macdonald, Leverburgh, in her new role as Service Manager.