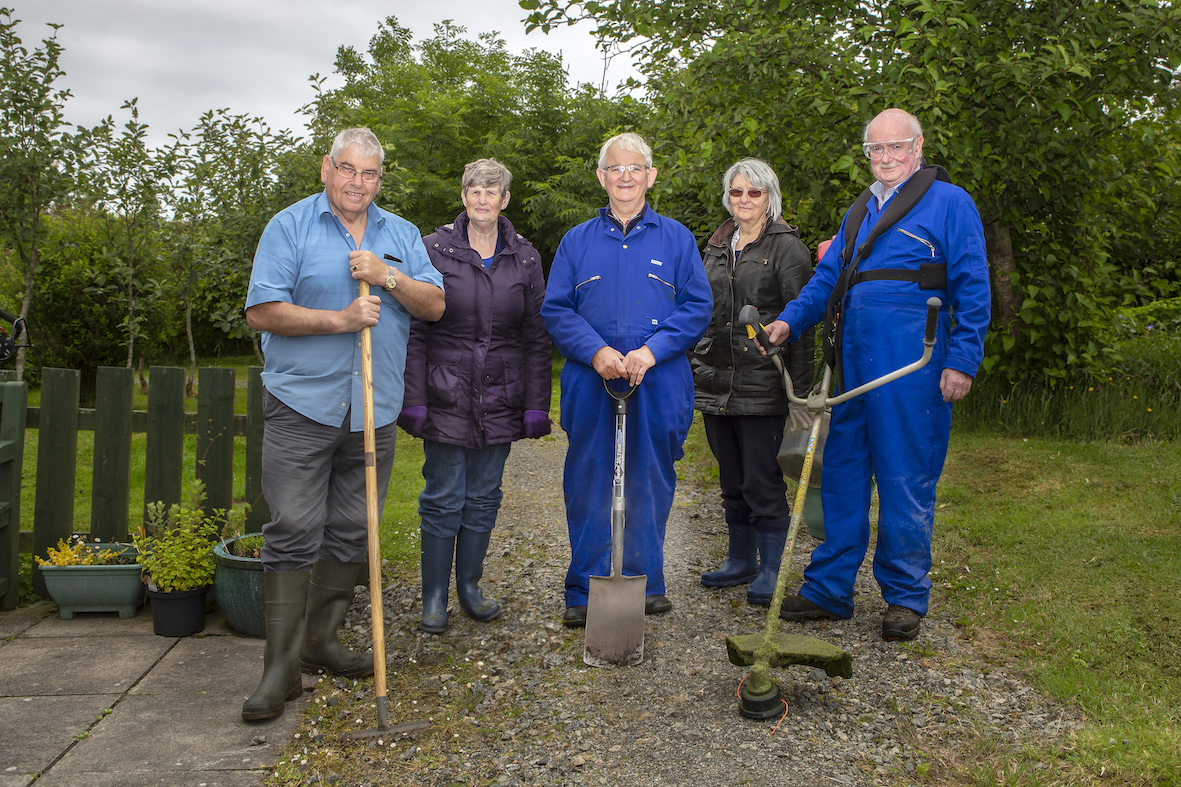 A community garden on the outskirts of Stornoway is growing well, thanks to support from community wind farm charity Point and Sandwick Trust and a lot of time and energy on the part of local residents.

Bayview Community Gardens, organised by Mossend Residents Association, is looking more mature with every year that passes since it was established on derelict waste ground more than a decade ago.

It has been awarded grant funding of £2,239 from Point and Sandwick Trust, the community wind farm charity which runs the three turbines at Beinn Ghrideag, and this year’s money will go towards shed repairs and new maintenance equipment.

This is the third grant Point and Sandwick Trust have made to the Bayview Gardens, which also received funding from the Scottish Landfill Tax.

All sorts of vegetables are being grown in the gardens – including early and late potatoes, carrots, lettuce, spring onions and beetroot – and the residents get a share when they are ready. The gardens are located in among the Barratt houses near Plasterfield – accessible by paths from Cnoc Iomhair (Ivorhill) or Redburn.

Ken Kennedy, treasurer of Mossend Residents Association, said: “We’re certainly very appreciative of all the funding we’re getting. The £2,239 will put us in a position where we can be pretty much self-sustaining.”

He said plans included making the shed watertight and investing in new equipment including a mower and shredder, plus smaller items such as shears.

Tuesday is the residents’ gardening day and he said that, while they could always use more help, there was “a core group of maybe eight or so who are out there every week”. Everyone had their “own little job”, he said, but there was not much upkeep once the garden was established.

Ken said they were now able to take some produce out of the garden and had been giving some to the Salvation Army, as well as the residents who do their bit for the garden.

To ensure a steady supply, Ken and Donald Macleod, another member of the Association, bring on some of the vegetables quickly in their own greenhouses, before then planting them outside in the community garden. This is particularly useful for a lot of the herbs, lettuce and radish.

The gardens and the residents association have an established link with Stornoway Primary as they worked with one of the Gaelic Medium Classes last year on an intergenerational gardening project.  Youngsters from class GME 3 and 4, a composite class, visited the gardens and took part in planting potatoes and cabbages. It was also filmed for BBC Alba.

Ken said: “We’ve got this link between the younger ones and the older ones which is quite satisfying and the kids enjoyed coming along and getting out of the classroom. That’s the time to sow the seeds. They were interested, without a doubt, and they had been doing a bit of preliminary work in the school. They knew exactly what they needed to ask and there was an instant connection.

Local councillor Angus McCormack, the Honorary President of Point and Sandwick Trust, played a key part in setting up the residents association. Looking back, Angus said the ground where the garden now is, had been in “an absolute state”, explaining: “It was really derelict and it was very overgrown and people had started throwing mattresses into it and all that sort of thing. The people roundabout weren’t very happy with that and we discussed how we might do something with that bit of ground.  It belonged to Barratts the builders and they agreed that they would transfer it to the community.”

The area is leased from the council but operated by the residents, mainly those from Cnoc Iomhair and Airigh Ard. The association extends out and down to Steinish and Tolmie Terrace and up to Plasterfield, North Street and Sandwick.  The basic garden was created in 2008 and designed by a landscape architect who was then working for Comhairle nan Eilean Siar.

Angus McCormack added: “The issue with projects of this nature always is that the first project funding and support is usually more straightforward to get. What is much more difficult is to get ongoing funding and that’s where Point and Sandwick comes in because we can come in and give them a relatively small amount of funding but it allows the project to build and do new things.”