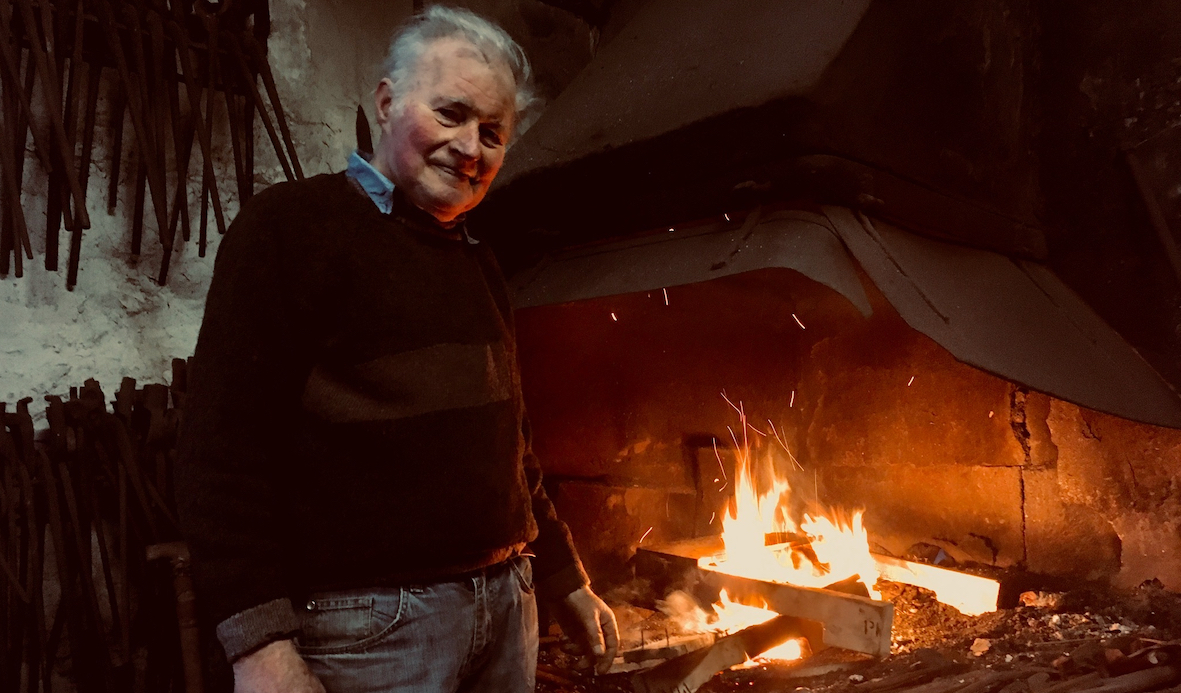 One of Stornoway’s best-loved characters, the town’s last blacksmith, Calum ‘Stealag’ Macleod, has passed away at the age of 84.

His funeral is today (Friday  August 9th) at the High Church of Scotland at 2pm.

Calum had been part of the industrial and social scene of the town since his childhood. At the age of five he was entrusted by his blacksmith father with the task of holding the heads of shire horses when they were brought for shoeing.

His father was the original ‘Stealag’, having earned his nickname by diving into a muddy puddle while saving a goal during school football. Calum learnt his craft at his father’s side through pure physical experience, graduating during the 1950s from his first jobs making pokers for the stoves that were still used in every home, to shoeing horses and making brands for sheep.

Some of the sheep brand marks and the story behind them are preserved for posterity at Museum nan Eilean at Lews Castle, where part of the door to the former smithy is on permanent display. One of his stories recalled days when escaped rams were brought to the smithy by police, so that the owner could be identified and a fine levied before the animal was returned.

For many years Calum was an essential supporter to island industry, tackling the numerous mending tasks needed for fishermen and crofters and always ready to fix a loom for a weaver who needed to get on with a job.

He never liked to see anything go to waste, and his smithy on Inaclete Road was an Aladdin’s cave of iron and steel pieces that might one day be put to use. He had a fascination with decorative techniques in wrought iron, setting himself puzzles such as creating a chain from a single piece of metal.

A musician by temperament, he lately bemoaned the fact that age and hard use of his hands had made it harder to play his accordion, but still contributed to the informal sessions of the Sawmill Band which met at the castle sawmill. He was also a fount of knowledge on Gaelic song, learnt from his mother.

Many people combined visits to his smithy with extended social sessions, listening to stories and remembering changed times. Although in recent years ill-health had keep him away from work for periods, he was still often to be found among the sparks of the roaring forge, wearing no protective clothing beyond an old jumper and working on anything from a gate to a peat iron with continued enthusiasm.

Calum is survived by his wife Mairi, son John Murdo and daughter Kathleen.