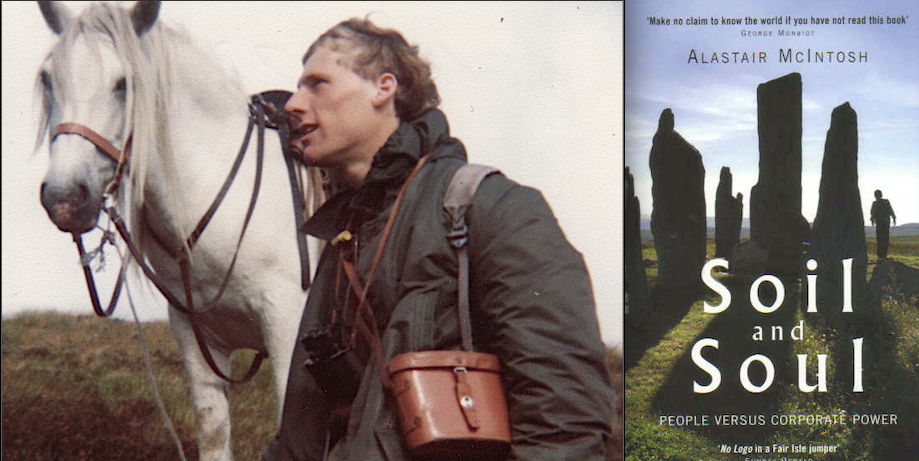 World's a stage for Alastair's book

Faclan: the Hebridean Book Festival will support the development of a theatre adaptation of Lewis writer Alastair McIntosh’s book Soil and Soul, it was announced recently.

Alan Bissett, the award-winning playwright, novelist and creator of The Moira Monologues, is adapting Alastair’s acclaimed work which describes how McIntosh’s upbringing on the Isle of Lewis shaped his life’s work as a prominent environmental and land rights activist. The project is being produced by new Lewis-based arts organisation sruth-mara.

Now, with support from An Lanntair and the National Lottery through Creative Scotland, a script-in-hand performance of Soil and Soul will feature as part of this year’s Faclan Fringe, at An Lanntair on Wednesday 30 October, following a week of development on Lewis with director Laura Cameron-Lewis and a cast of four including musician Mairi Campbell, creator of the theatre shows Pulse and Auld Lang Syne. The performance will be followed by a discussion with Alastair McIntosh and Alan Bissett about the themes of the book.

Andrew Eaton-Lewis, director of sruth-mara, said: “We’re really excited to be bringing Soil and Soul to Faclan. This will be a vital part of the development process, as we test the script in front of a live audience for the first time and seek feedback from the Lewis community, many of whom have an intimate knowledge both of Alastair’s work and the issues it explores.

"The book’s themes – ordinary people vs corporate power, industrial development at the expense of small-scale agriculture, environmental damage – are more relevant than ever as the world faces a climate crisis. One of the book’s great strengths is the way it connects stories from Lewis, Harris and Eigg to environmental, cultural and land struggles all across the world. It’s a book that’s deeply rooted in the Hebrides but with a global perspective.”

Soil and Soul’s high profile admirers include Thom Yorke of Radiohead, journalist and activist George Monbiot, who has called it “a world-changing book”, and Ricky Ross of Deacon Blue, who has described Alastair as “a living prophet”. The Sunday Herald likened Soil & Soul to Naomi Klein’s international bestseller No Logo.

Alastair McIntosh said: “I am in awe at the attention to detail, depth, elegance and beauty of what Alan Bissett has created in his script for Soil and Soul. I never thought it would be possible to capture such a multi-levelled story into a single script like this, and with such an eye for lines that matter, neatly woven in.

"I’m very much looking forward to working with Alan and the cast on this project, and to sharing what we are creating with an audience on Lewis.”

Alan Bissett said: “Alastair McIntosh's Soil and Soul is, for me, one of the most important non-fiction books of the last 30 years. Both reading and adapting it have changed my worldview profoundly, such is Soil and Soul's benign power.

"It has a deep resonance for what it says about the way in which land is appropriated by indifferent upper-layers of society, at the expense of the people who live on it, but it also acts as a history of the Highlands, a primer on Celtic Christian theology, and a galvanising appeal to all of our better natures.

"What I hope we've done is taken Alastair's mighty work and turned it into a piece of theatre that will captivate and transport a live audience into a deeply Hebridean story, a 'gid night oot', as John McGrath might've said. At this stage of the project, we need to find out what the reaction of the people of Lewis and Harris is to it, so please do come along, see it and give us your thoughts."

Roddy Murray, director of Faclan: the Hebridean Book Festival, said: “I am old enough to remember when 7:84 brought The Cheviot the Stag and the Black Black Oil to school. Many of the issues originally raised in that seminal work are relevant today and it seems to me that Soil and Soul is a blueprint for understanding, advancing and developing creative responses to these in the 21st Century. I agree that it is vital that the script and production should be trialled in Lewis. As Alastair’s place of birth and upbringing, the island is the crucible for the philosophy and ideas in the original book and the feedback will nourish, inform and strengthen the further development, content and structure of the script and production.”

The creative team for Soil & Soul’s development week includes musician and theatre performer Mairi Campbell and Lewis-based theatre-maker Laura Cameron-Lewis, who has previously worked with the Arches and the Royal Lyceum Theatre as well as writing and directing her own work for the Fringe First award-winning company Highway Diner. Laura will be directing the cast throughout the week, while Mairi will be working on a musical score for the show as well as performing.

Andrew Eaton-Lewis said: “We’re thrilled to be working with Mairi and Laura on this exciting new stage in the creative process. Alan’s script draws heavily on cèilidh traditions, with music and dance integrated into the storytelling at various points. We can’t wait to explore this further with Laura, Mairi and the rest of the cast.”

Early Bird Festival Passes are available now, priced £55. Tickets for individual events will go on sale on 3 September, when the full programme for Faclan Fringe and Faclan Òg will be announced.

For more information and to book a festival pass, visit www.lanntair.com/faclan.