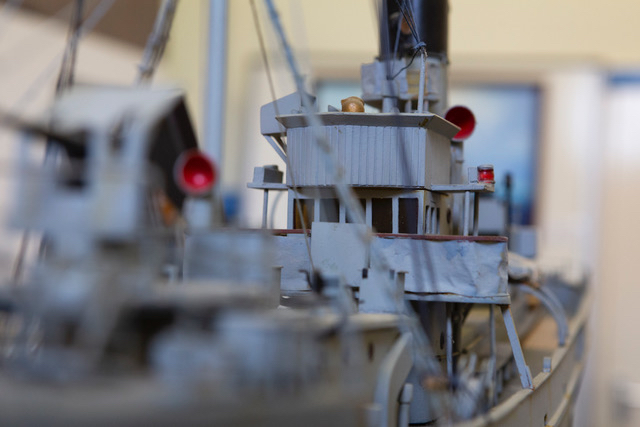 Bàtaichean agus Eile (Boats etc), the latest exhibition at Comann Eachdraidh An Rubha, showcases the talent of local craftsmen whose interest in the sea and boats has inspired them to construct impressive models of a variety of types of boat.

The idea for the exhibition came about when John Campbell (Iain Nommie) of Portvoller – the maker of the famous Iolaire model – donated some of his other models of boats to the Comann Eachdraidh.

Catriona Dunn, Comann Eachdraidh Secretary, explained: “We were keen to mount an exhibition with these models as the core and to invite any other local people to contribute stories, photographs or artefacts on the theme. We are very grateful to all those who contacted us, and whose contributions feature in the exhibition.”

The models are the work of John Campbell, Portvoller; Richard Stenhouse, Holm; Mike Dunn, Portvoller and the late Malcolm Mackay of Plasterfield.

Some of the models are in the possession of those who owned the original boats and have been loaned for the exhibition.  Alex John Murray, Bayble, and John Nicolson, Sheshader, both loaned models and provided information on them.

Alex John Murray has loaned models of two boats he had owned and skippered himself – the Endeavour and Ocean Gain – as well as a model of a boat owned by his grandfather, the Muirneag. It was built for his grandfather in 1902 and Alex John described this exhibition as “fantastic”.

Alistair and Shona Maclennan from Stornoway has loaned two models by John Campbell to the exhibition – bringing his total number of boats in the exhibition to 11.

John Campbell said his interest in model boats began around the age of 10 or 11, when he made them to sail on Tiumpanhead loch.

He described the early process. “Two barrel staves from the herring barrels, nailed together, one on top of the other, a wee wheelhouse and a funnel… on Tiumpanhead loch.”

He attributed this interest in boats to having male relatives – including his father, seven uncles and his grandfather – all at sea in the Navy or the Merchant Navy.

Richard Stenhouse, who took up making models to give him something to do after finishing work, loaned six of his models to the exhibition, including a model of a Fifie, which was the first one he made from scratch and which took him 240 hours.

Mike Dunn contributed a model of a landing craft, which had taken him “years” to build, and also built many of the display cases for the exhibition.

Most of the models are accompanied by historical information and additional photographs. Boats at sea feature in paintings loaned by Will Evans, Lower Bayble, and these atmospheric paintings are an excellent accompaniment to the models.

One particularly interesting artefact loaned to the exhibition is the Coronation Cup – awarded to the winner of a regatta held in 1902 to celebrate the coronation of Edward VII.

It had been won by John Campbell of Garrabost, in his boat, Nellie, and is on display along with a newspaper report on the event, carried in the Stornoway Gazette in 1963.

It described the race for sailing fishing boats over the triangular course of 28 nautical miles, from Stornoway to Tabhaidh Minor then to Chicken Rock and back to Stornoway.

“Skipper Campbell was a sight of great interest, a weather-beaten low-set sturdily built man, standing at the wheel which both hands grasped with an iron grip as they approached the finish line,” wrote the correspondent.

The skipper was so intent on winning that “from the beginning of the race until the sail was lowered after crossing the finishing line he never uttered a word, except to give an order.”

Two of the oldest artefacts in the exhibition are the solid wooden hull of a model boat, which was dug up by Tom Clark in Sheshader, and another model of a fishing boat, built with a solid wooden hull, and crafted by the late John Ferguson, Portvoller.

There are additional photographs and information on other local boats and their crews.

Catriona Dunn said: “We are grateful to Point and Sandwick Trust who gave financial assistance towards materials to mount the exhibition and who provided hospitality for the opening event.

“Those who have already seen the exhibition have been very complimentary about it. If you have not yet visited, please come along to the exhibition hall in the former Knock School to see for yourselves. You can combine it with a visit to Buth An Rubha and Café Roo and have an enjoyable day out.”

Catriona paid tribute to the craftsmanship on display, saying: “It’s amazing really. The effort and the patience that goes into these models…”

Donald John MacSween, General Manager of Point and Sandwick Trust, said: “I think it’s a really wonderful exhibition and very appropriate for Point Comunn Eachdraidh to do it.

"It’s great to record the history of the fishing industry in the area and the exhibition really does do justice to all these labours of love.

“The models are terrific and anyone who gets the chance should come and see them. Pictures by Sandie Maciver of SandiePhotos.