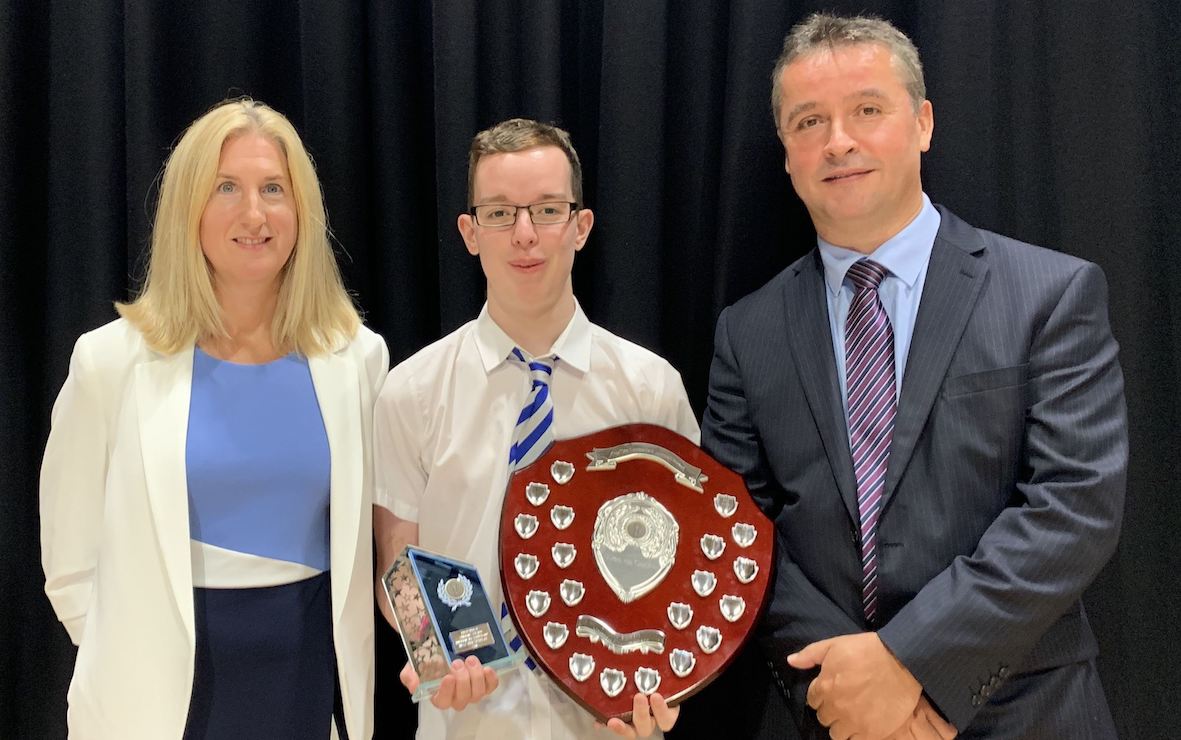 The inaugural Award for Significant Contribution to Gaelic Development from the Donald Stewart Memorial Trust has been jointly won by Katie Gillies, of The Nicolson Institute and Uilleam MacDougall, Sgoil Bhàgh a’ Chaisteil.

The Award has been established in recognition of Donald Stewart’s work on, and support of, the Gaelic language whilst serving as MP for the Western Isles.

The Donald Stewart Memorial Trust was established for the encouragement of education in the Western Isles.

Since the formation of the Trust in the 1990s, it has been making annual awards, for “Outstanding Achievement” to pupils in the 5th/6th year classes from across the four 6-year secondary schools in the Western Isles.

This year, the Trust has established a new award for, “Significant Contribution to Gaelic Development” in recognition of the late Mr Stewart’s support of the Gaelic language and to link this to current developments in Gaelic, especially amongst young people, throughout the islands.

Although not a fluent Gaelic-speaker, Mr Stewart was a great supporter of the language and did indeed propose a Private Members Bill in 1981, the Gaelic (Miscellaneous Provisions) Bill which would have, among other things, authorised the use of Gaelic in legal proceedings and the provision of official forms in Gaelic and further provisions relating to broadcasting.  Sadly, the Bill did not receive support from the Government of the day and was not passed but Mr Stewart continued to be a fervent supporter of Gaelic.

As with the award for “Outstanding Achievement” the award for “Significant Contribution to Gaelic Development” is open to pupils in the 5th/6th year classes from across the four 6-year secondary schools in the Western Isles, i.e. The Nicolson Institute, Sir E Scott School, Sgoil Lionacleit and Sgoil Bhàgh a’ Chaisteil with pupils being nominated by the schools.

Trustees were unanimous in their view that the award be jointly awarded to Katie Gillies from The Nicolson Institute and Uilleam MacDougall from Sgoil Bhàgh a’ Chaisteil.

In considering the nomination for Katie Gillies, the Trustees were highly impressed to learn of her ambassadorial work for the Gaelic language both within the school and also in the wider community, her consistent use of the language to both staff and peers and younger pupils, and her decision to study and take exams in a number of subjects in Gaelic, although having the option of studying the courses in English.

The Trustees were also delighted to learn that she had represented the school in the National Secondary Schools’ Gaelic Debating competition and of her work and success in the FlmG competition, both with the Gaelic youth group Tairneanaich and also with the S6 group in which she was an integral part, which won the best film in the fluent category and where she won Best Performance award in the, “fluent category”.

Amongst other specific “contributions to Gaelic” which impressed the Trustees were her work at one of the Gaelic After-school Clubs, assisting the young pupils with Gaelic homework and participating in other activities through Gaelic with them; her voluntary work at the Hebridean Celtic Festival as part of the Gaelic team, promoting the native language to tourists and her voluntary work within a local care home as part of her Duke of Edinburgh Award, and again was very proactive in using Gaelic with Gaelic-speaking residents.

In considering the nomination received for Uilleam MacDougall, the Trustees were highly impressed to learn of Uilleam’s participation, over many years, in Gaelic debates such as the National Secondary Schools’ Gaelic Debate, and in Gaelic media projects such as FilmG and that he had a number of successes, winning Best Film in 2015, Best Actor in 2017 and also nominated for Best Writer. They were also delighted to hear that he had been involved in all aspects of film making, acting, script writing, filming and editing and that he eagerly provided support and encouragement to others involved in the projects, making for excellent teamwork.

The Trustees were also delighted to hear of Uilleam’s love of the Gaelic language and culture and his passion to use Gaelic in all situations, be this within the school, when you go about your duties as House Captain, Prefect or Pupil Council member or outwith the school when carrying his many hours of voluntary work, with a local Primary School youth club, during local RYA sailing sessions and whilst undertaking the Duke of Edinburgh Silver Award.

Margaret Martin, Chair of the Donald Memorial Trust said, “We were delighted with the calibre of nominations we received from the schools for this new Award, for, “Significant Contribution to Gaelic Development” but I and my fellow Trustees were unanimous that the Award should go to Katie and Uilleam.  Both have abundantly demonstrated their commitment to the language and are both excellent ambassadors amongst their peers.  If current progress in Gaelic development is to continue, it is important that we encourage and recognise work being undertaken by young people like Katie and Uilleam in our schools. I congratulate Katie and Uilleam and send the best wishes of the Trust to them in all that they do in the future.”