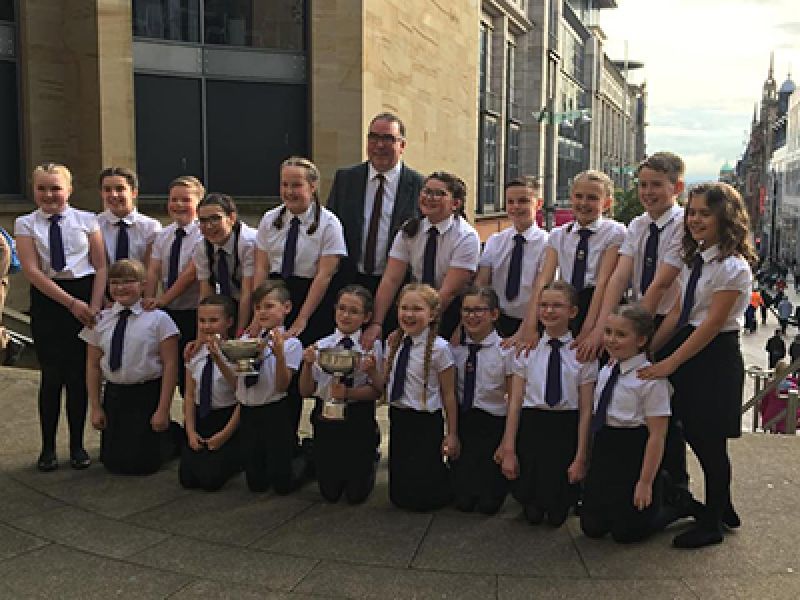 Glasgow’s Royal National Mòd is proving a goldmine for Lewis competitors, with medals and trophies set to come back to the island.

The Nicolson Institute’s Aaron Ingram was one of the first to set the tone in the junior piping classes on Saturday (October 12th), with a gold badge for a Piobaireachd. Stornoway primary school’s Alice Reid followed up with a silver badge the same day playing a Gaelic air and a march, Strathspey and reel on the fiddle.

Roy Morrison of Ness added another gold on Saturday with his accordion instrumental in the under-13 age group. He was also awarded the Daniel G R Burt (Chapelhall, Airdie) Memorial Trophy and the Smith Mearns Trophy.

Lochs youngsters continued the run as Monday competitions opened. Under the direction of conductor Iain Maciver, Coisir Og nan Loch won gold and silver in the under-13 choral unison classes, together with the Olive Campbell MBE Trophy and the Macintyre Cup.

Meanwhile Dual, the Fèis Eilean an Fhraoich folk group, won the Allan Thomas Mitchell Trophy in the under 19 folk group competition and Point’s Alice Macmillan pulled off a superb performance in the under 19 solo singing, open only to first prizewinners of solo singing competitions at previous Royal National Mods. She took first place and was awarded the Skelmorlie and District Highland Association Quaich.

And both Stornoway and Lochs were represented in the girls 11-12 learners’ singing competition, where Kyla Mackenzie of the Nicolson Institute took first, the Ronald MacEachan Memorial Cup and shared the Dunoon Observer and Aygyllshire Standard Medal with Sgoil nan Lochs’ Aimee Macleod in second place. Seumas MacRae of the Nicolson Institute won silver in the same competition for boys.

In poetry recitation, Sgoil nan Lochs’ Lily McDowall and Cormac Sandison are bringing home a gold and a silver medal in their age groups and Mary Morrison of the Nicolson Institute a bronze.

Even the youngest competitors from Lewis did the island proud, with five-year-old Magnus Montgomery from Sgoil a Bhac taking gold in the learners’ poetry recitation and silver in the solo singing for his age-group.

Celebrations continued this morning (Tuesday) as the Nicolson Institute choir won both the Puirt a Beul and the unison singing competitions. Childrens’ competitions conclude today with solo, duet and choral singing, story-telling and bible reading among the disciplines to be decided.