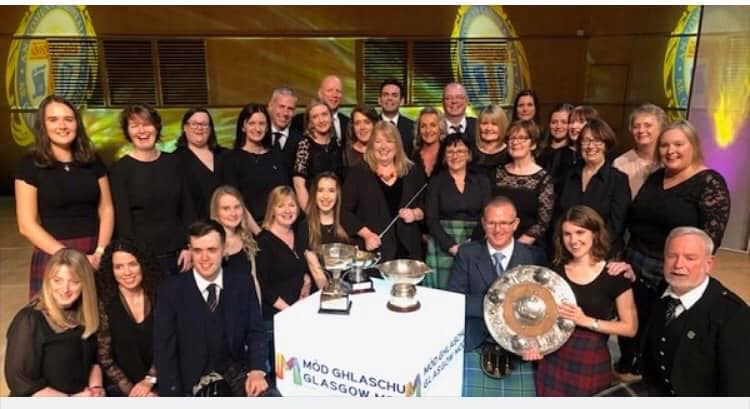 Choirs from the Isle of Lewis and the Isle of Harris carried the Western Isles banner with pride at the Royal National Mòd in Glasgow yesterday (Thursday October 17th).

Choirs from Carloway, Back, Lochs and Harris will be carrying home trophies galore today, after a day of success in the rural choirs competition.

The coveted Lorn Shield was carried off by Còisir Sgìr' a' Bhac, after their rendition of the prescribed song, a famous sailor's song about the steamer 'Kia Ora'. The song itself was composed by Murdo Morrison (Murchadh Beag), of Hàbost in Ness, in the late 1920s and later made famous by Calum Kennedy.

The Lorn shield competition saw a clean sweep for Lewis choirs, with Back Choir’s conductor Avril Allen winning the Mrs C MacDonald Silver Baton for the conductor of the winning choir. Avril, who also conducted the winning Nicolson Institute choir during the children’s competitions earlier in the week, said: “What a day.....week! Well done to my choirs who sang their hearts out, and of course I’m delighted with the results ! “

Back choir finished off their fantastic day with a third place in the Grampian Television trophy competition, a contest in which Còisir Bhan na Hearadh took the silver position and shared the An Comunn Gàidhealach Prize.

Meanwhile Còisir Ghàidhlig Chàrlabhaigh were awarded the top prize in the puirt-a-beul competition, together with the Calum Robertson memorial trophy for highest marks in Gaelic, Evelyn Huckbody memorial trophy for highest marks in music and the An Comunn Gàidhealach Prize. Their conductor also brings home the John Young Memorial Baton for the Conductor of the winning choir, sealing the result as their most successful Mòd yet.