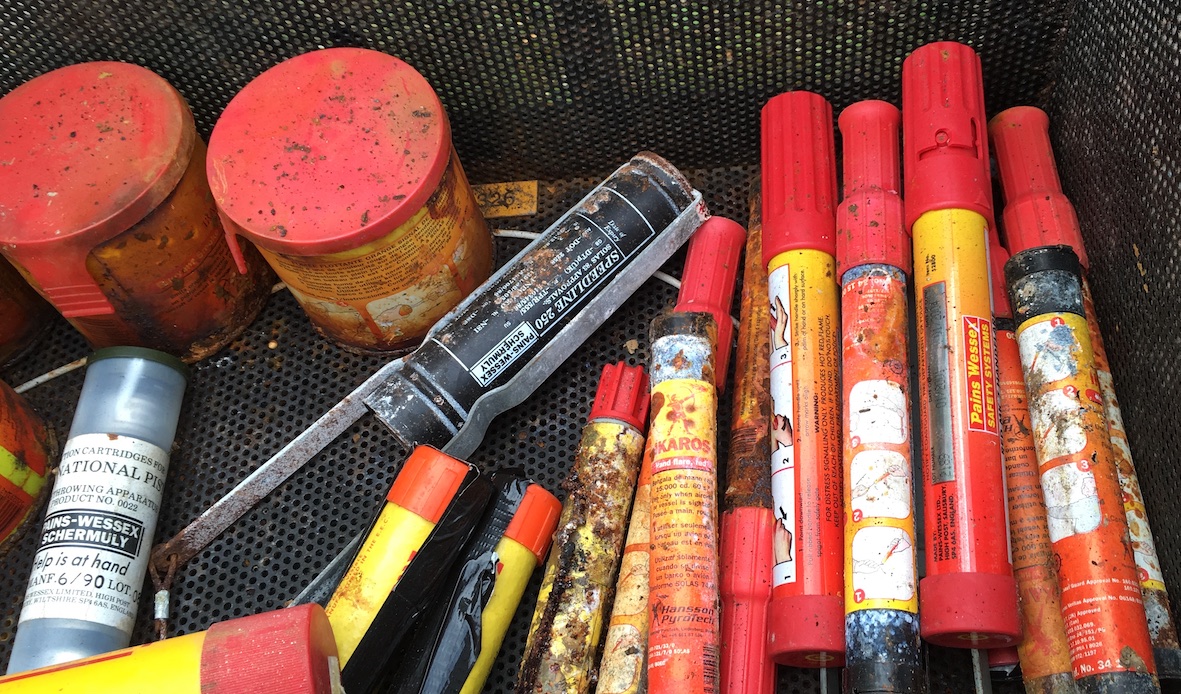 Marine pyrotechnics and flares collected by Coastguard officers in Stornoway will be carefully destroyed tomorrow (Monday October 21st) by a specialist company contracted by HM Coastguard.

The controlled destruction is timetabled for tomorrow afternoon at a safe coastal location outside Stornoway and away from residential property.

Commercial explosives specialists EPC-UK visit the islands twice a year to carry out controlled destruction of hazardous material. Elsewhere in Britain, they collect and return the flares for destruction at their own base at Alfreton in Derbyshire, but the challenge of transporting potentially unstable pyrotechnics on passenger ferries means that the Western Isles and Shetland both need their own disposal arrangements on-island.

Time-expired pyrotechnics (TEPs) are regularly handed in at the Coastguard Station in Stornoway and dedicated collection days are organised by the Coastguard, the last of which was on Saturday 5th October.

Flares and other pyrotechnics are also sometimes found on shorelines. Coastguard Rescue Teams are sent to investigate such finds and, if it is safe to do so, to recover the item. Each CRT carries a box in their vehicle known as a short-term mitigation cage (STMC). The steel boxes are perforated with many holes, allowing gases to escape but retaining solid materials. They’re specially designed to allow the safe transportation of flares and affectionately known as 'Tetley boxes' after the teabags, which built a reputation on thousands of perforations.

The kind of flares recovered for safe disposal can vary widely, both in condition and in where they are found. Kept in boats or sheds, sometimes for many years, or washed up on shorelines, they can pose a hazard to anyone handling them.

Last week, Stornoway Coastguard Rescue Team were tasked to pick up three flares that had been dumped at the landfill site at Bennadrove and during a recent collection day, some flares which went out-of-date in 1962 were handed in.

While they await safe destruction, out-of-date flares and other pyrotechnics are sealed into boxes and locked away in a purpose-built store at the Coastguard station in Stornoway.

Part of the safe handling process calls for an integrity check on each item. If there’s any concern about their condition, or if they're more than 25 years old, these flares are kept away from the main store and put into a segregation store, providing contained storage for flares many years out-of-date and others badly corroded by sea-water or damaged by rough handling.

When Coastguards collect flares a record is made on an online database. The record is monitored by EPC as part of their contract and, when the amount in the store reaches a certain trigger point, they get in touch to set the date of their visit.

On Monday EPC-UK will carefully empty both the main and the segregation store and will transfer the flares into their own tanks, the size of a large Belfast sink and made of inch-thick steel. This will be filled, then locked down and wired up.

When the 'burn' of the flares commences, says Carl Taylor, senior coastal operations officer for the Coastguard: "it's more of a whimper than a bang. There's a lot of smoke and the occasional pop, but even people who live relatively locally should not be aware of what's happening. The smoke goes straight out to sea and we are nowhere near houses."

"Everything is done in the safest possible way, including our own internal procedures and the full safety rig we wear when we open the store or handle the flares.

"I've occasionally seen situations which caused a great deal of concern. I once found that a leisure fisherman kept a dozen red parachute flares in a bin-liner under the seat of his boat, where they were soaked in sea water. When I pointed out that they were wet and all out-of-date, he told me not to worry, because he would take them in and dry them in front of the fire a couple of times a year!

"We've had someone bring a sack of flares to our open day that had been dumped in a community skip and we've been called to the Creed Park recycling plant because council workers found flares that had been put into a bin.

"There are, unfortunately, people that don't realise quite how dangerous these items can be. These can cause serious injury if not handled correctly or kept after their expiry date".

If you have marine pyrotechnics that are out of date or need to be disposed of, contact Stornoway Coastguard on 01851 702013 for advice on how and where they can be disposed of. If bringing flares in to the Coastguard, it's worth calling in advance, to make sure qualified and trained staff are on hand to accept them.

At a separate event in Benbecula yesterday (Saturday October 19th), 405 out-of-date pyrotechnics were handed into Coastguards, of which some were 42 years out-of-date. These will be destroyed at a location in Uist under the same safety precautions.