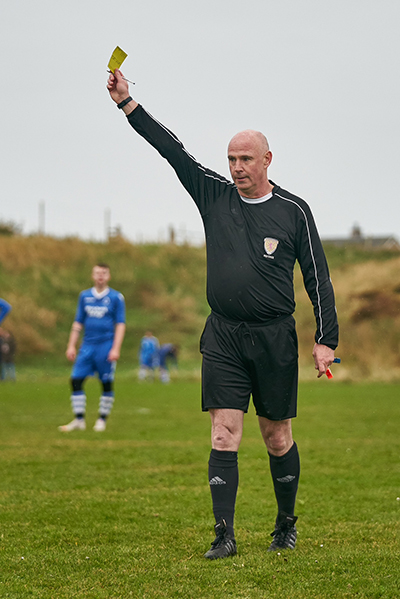 Stornoway fire station’s manager has left the island with a final message for householders – keep safe!

Station manager Craig Lauder is on end-of-service leave back in his home town of Alloa ahead of his formal retirement on October 31st, but returned to Stornoway on Saturday (October 19th) for a send-off from Fire Scotland colleagues.

He admitted to feeling ‘a bit emotional’ after being presented with Harris Tweed, whisky, gin and a framed photograph of Stornoway town centre at the retirement celebration at the Rangers’ Club.

Craig told welovestornoway.com: “I’ve enjoyed my time in the Western Isles. When I came here 18 months ago I knew it would probably be my last posting and I have not only enjoyed the job, but the experience of living in the Western Isles, the people and the fact that my role has allowed me to travel the length of the islands.”
Craig has been with Fire Scotland for 22 years, joining the service after eleven years with the RAF, of which six were spent working on the Queen’s flight, the aircraft which transport the Royal Family around the UK and beyond.

After a working lifetime in public service, he’s now intending to take some well-earned time off until Christmas, spending time with wife Margo and with family, friends and neighbours, before deciding what his next role might be.

“Finishing my fire service career in Stornoway has been excellent,” he said. “I like the town and have been able to get to know people a bit better through my involvement with football, too. When I arrived I volunteered my services as a referee, as there are not a lot of qualified football referees in the islands.

“I really enjoy refereeing in the islands league. It’s different from the mainland – you get a lot more respect from the players and games are well supported, there’s a lot of enthusiasm for football here.”

Craig intends to return to the islands during his retirement – perhaps even as a visiting referee – and he’s hoping to do some of the ‘touristy things’ he didn’t get time to fit in during a busy working 18 months.

Meanwhile he finishes his service in the way that’s consistent with his dedication to fire safety, with a final warning for householders.

“I’ve been in the fire service for so long that I can’t help saying to everyone ‘keep fire safety in mind. Make sure your smoke alarms are fitted and working’. I’ve attended too many house fires, here and elsewhere, to say anything else as I sign off.”

Pictures show Craig in his Fire Scotland role at Stornoway fire station, and on the field during a Lewis and Harris league football match.