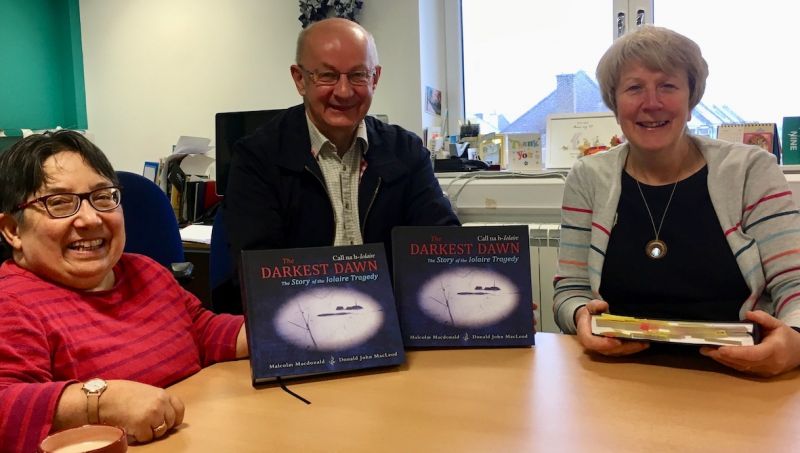 Stornoway publisher Acair has achieved a huge endorsement of the quality of their catalogue of works, with two nominations for the most prestigious awards in the Scottish literary calendar.

The Saltire Society Scotland announced their shortlists for all categories of books at an event at Waterstones bookshop in Edinburgh on Friday night (October 25th). Acair’s general manager Agnes Rennie was there to hear news that two recent publications by the island publishing house are among those shortlisted in different categories.

Shortlisted for the Saltire History Book of the Year 2019 is Malcolm Macdonald and Donald John Macleod’s definitive account of the tragedy of the Iolaire, The Darkest Dawn, which was published to acclaim just ahead of the January 1st centenary of the disaster.

It’s in contention on a shortlist of six works, while a book of long poems by Christopher Whyte, Ceum Air Cheum (Step by Step) could be awarded the title Saltire Poetry Book of the Year.

Following the announcement, Acair issued a statement saying: “The Darkest Dawn: The Story of the Iolaire Tragedy (Acair, 2018) has been shortlisted for The Saltire Society History Book of the Year. Co-authors Malcolm Macdonald and the late Donald John MacLeod spent over twenty years researching material for this book and they are worthy of all recognition received as a result of the book’s publishing.

“Ceum air Cheum (Acair, 2019) by Christopher Whyte has been shortlisted for The Saltire Society Poetry Book of the Year. Christopher’s twelve longer poems cover wide-ranging topics such as anti-Catholic prejudice in 1960s Glasgow, the cage of English and a troubled interaction with Sorley MacLean. Christopher’s work is firmly rooted in Scottish realities while being absolutely international in outlook.”

Author Malcolm Macdonald reacted swiftly to the news, saying: “On behalf of the late Donald John and I, can I say that astoundment is the only word that encapsulates my feelings after 'The Darkest Dawn' was nominated by the Saltire Society in the shortleet for their history book of 2019!”

Sarah Mason, programme director at the Saltire Society, said: “We are proud of the fact that the Saltire Literary Awards shortlists celebrate the diversity, quality and richness of books to come from Scotland over the past year. The Saltire Literary Awards have a proud history of celebrating and bringing wider attention to excellence and we congratulate the writers and publishers who have been shortlisted this year.”

The award winners will be announced at an event in Edinburgh on November 30th, with the winner of each book award receiving a cash prize of £2,000 and going on to be considered for the top prize of Saltire Scottish Book of the Year, receiving a further £5,000.