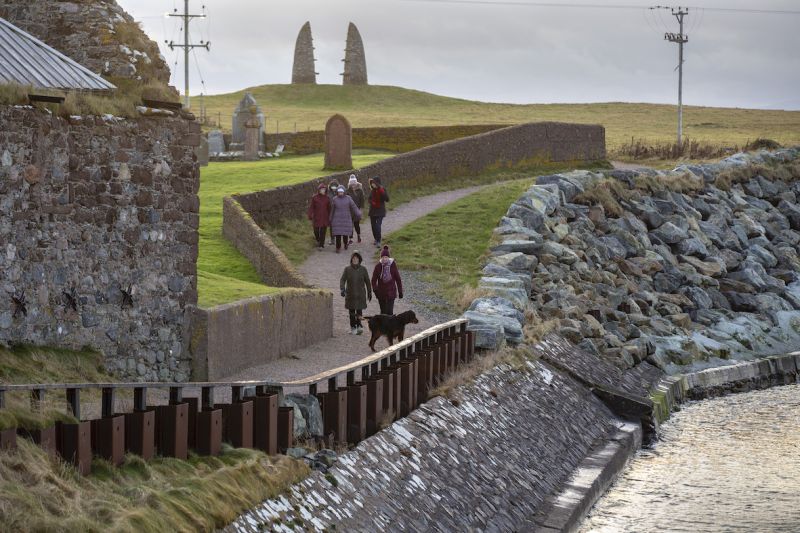 The first phase of a £1million project to develop a 40km coastal path from Stornoway all round the Point peninsula has received a stamp of approval from local walking groups.

Groups such as the Women For Mission walking group from Garrabost Free Church are now choosing to walk circular routes taking in the Braighe, the historic Eaglais Na h-Aoidh (Ui Church) and the village of Aignish thanks to the project which shored up the coastline and built a new path.

Work on the first phase of the Point and Sandwick Coastal Community Path was carried out in November and December 2018. Development of the coastal path is likely to be split into five phases, with fundraising for the second phase at an advanced stage.

The £114,000 first phase – funded by £57,000 from LEADER with the remainder coming from the profits from Point and Sandwick’s Beinn Ghrideag wind farm – secured 100 metres of coastline and also the Ui Church’s graveyard wall, which was under extreme threat of erosion.  It also repaired a damaged culvert near the Aignish grazings, so the route is now totally dry.

Catriona Dunn of the Garrabost Women For Mission group said the new coastal path had made a big difference to their experience of walking in the area. “It’s pleasant underfoot. It’s easy to walk on and parts of it weren’t before. It was grassy and muddy in parts, especially where the culvert was. You wouldn’t even attempt it in winter.”

It was a different story now, she said, with the group walking it regularly, all year round – most recently on the Saturday before Christmas.

“I think it’s really pleasant because you’re walking along the coastline and you’re seeing the views and the seals – there was a heron as well – and what’s been done to the church.”

The Women For Mission group usually meets to go walking together once a week and agreed the group gave them all a physical, social and psychological boost. The physical exercise improves their health and sense of wellbeing, while the group aspect helps them get to know each other.

Having an improved infrastructure helps them plan their routes and explore their local area more.

Another member of the group, Chrisann Mackenzie, said people from outwith the area might not think of coming to Aignish for a walk but it had a lot going for it. As well as the Ui Church and the Braighe coastline, it was a circular route, which always appeals, and route-finding was easy.

Donald John MacSween, general manager of Point and Sandwick Trust, said the wind farm charity was pleased to have played a part in creating such valuable infrastructure.  He said: “Getting out and about for an easy stroll in our area is now much easier along this completed part of the coastal path. It is good to see more and more people locally out walking – the easiest and cheapest exercise available all year round, if suitably clad.”

For those unfamiliar with the area, the route which has been made accessible by completion of the first phase of the coastal path is on OS Explorer Map 459, Central Lewis and Stornoway.

It begins at Grid Reference 483 321 (the parking area at the Point end of the Braighe, near the Aignis Farm Raiders Monument) or from GR 492 320 (the Old Knock School, now home to Buth an Rubha, Cafe Roo and the Point and Sandwick Trust offices).

If starting from the Old School / Café Roo, walk westwards down the A866 main road towards the Braighe, until you come to the parking area that is the alternative start point, just under 1km away.

Next, take the party northwards across the Braighe isthmus, going through a kissing gate and passing the raiders monument. Eaglais Na h-Aoidh and the coastal path will become obvious on your right-hand side. Follow the path round as it skirts the outside of the church and its graveyard, following the very edge of the coastline and then crossing grazings.

Conditions are excellent underfoot and the sea views very enjoyable.

About 250 metres past the church, there will be a road off to your right. Ignore it and keep on the path. Shortly afterwards, you will pass a small beach to your left – there are often many seals to be seen here – and very soon the path will end and become a road. Follow this road uphill for about 200 metres until you see another road off to the right. Turn right here and follow it all the way along until you meet the main A866 road again.

Turn right downhill and you will arrive back at the Old School / Cafe Roo after about 200 metres – highly recommended for hot drinks and cakes or cooked breakfasts or lunch.

The walk described is 3 km but can be extended slightly by continuing on the road uphill after the path has finished, instead of turning right after 200 metres.

This would take you all the way uphill and out onto the main road near the houses at Seaview. To complete the walk, as before, turn right downhill and return to the Old School / Café Roo.