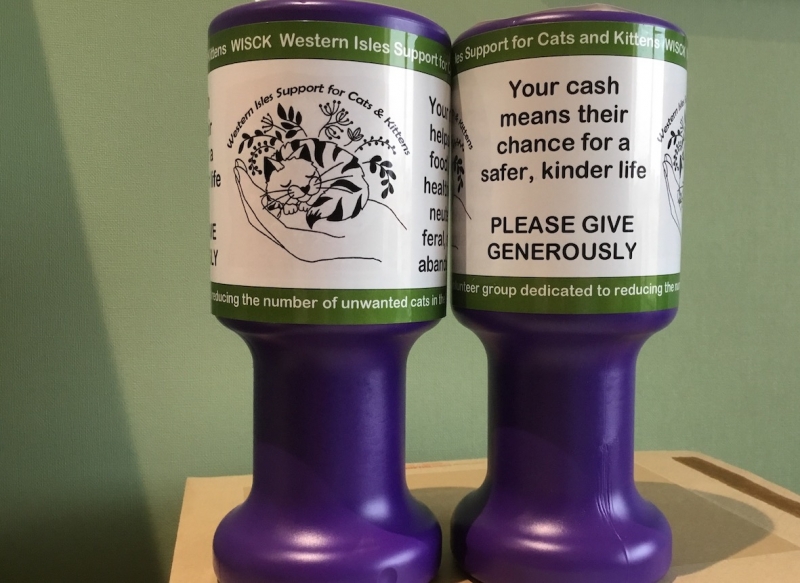 A new cat rescue group is being launched tomorrow (Monday 3 February) in the Western Isles after the national cats’ charity withdrew at the end of 2019.

Western Isles Support for Cats and Kittens (WISCK) has been set up in response to an enormous outcry among cat-lovers when Cats Protection announced last year that they were pulling out of the islands.

Islanders were concerned about a return to ‘the bad old days’ when the welfare needs of cats were simply ignored. Feral cat colonies exist all over the islands, with female cats breeding constantly and kittens often suffering from parasite infestation, hunger and danger of injury or death from vehicles and other hazards.

Now a group of dedicated volunteers have decided to step in and do what they can to support island felines. Trapping, taming and socialisation, hand-feeding of kittens and getting sick and injured cats to the vet are just some of the tasks already being taken on by the new organisation.

The WISCKers include a constituted committee of six based in Stornoway and a small crew of dedicated fosterers, who will take in cats and kittens and look after them while health-care, neutering and, eventually, re-homing are organised.

There is also a team in Uist starting work on support for cats and kittens across the Uists and Benbecula and, backing up the core team, there’s exceptionally good support from other organisations who have an animal welfare remit.

WISCK’s Lewis and Harris Chair Alison Smith said: “We are very lucky in the network we have in the islands. The Old Mill Veterinary Practice is extremely supportive with everything from planned neutering of ferals to emergency care of cats that have been hit by cars.

“The SSPCA is working with us as we begin a programme of trapping female cats and kittens, lending us traps and other equipment so that we can get them indoors and prepare them for neutering and release – or socialisation and re-homing, if that’s possible.”

The trap, neuter and return (TNR) programme has been licensed by Scottish Natural Heritage, who are also supporting the new organisation. Alison said: “We’ve also been supported by businesses. Maybury Gardens in Stornoway, for example, has given us tremendous support by accepting donations for food and cat litter on our behalf.

“During the time since the national charity withdrew, we have had cats to care for, but we have been left absolutely without resources. We had no bank account, no vehicle, no traps and our pens were, and still are, in a poor state of repair – they were due for replacement just as we were left in the lurch.

“For the moment, what we need most is public support. We need money to feed cats, heat their pens and get them treated at the vets. We need volunteer fosterers who can give over a room or a water-tight outbuilding to foster feral kittens and we need volunteer cleaners, cuddlers and catchers who can help us with all the tasks needed to get cats and kittens in out of the cold.”

An urgent initial appeal is to fix up old outdoor pens and help build new ones, so that trapped feral cats can be kept safe while they recover from neutering or rear the last of their kittens before they are spayed. Any builder or joiner who thinks they can help with that is asked to get in touch.

And donations, small or large, one-off or regular are especially welcomed. There are collecting tins in businesses around the islands, and larger donations can be taken by Paypal or direct donation by bank transfer. Contact WISCK via their Facebook page (search for Western Isles Support for Cats and Kittens) or by email at This email address is being protected from spambots. You need JavaScript enabled to view it.