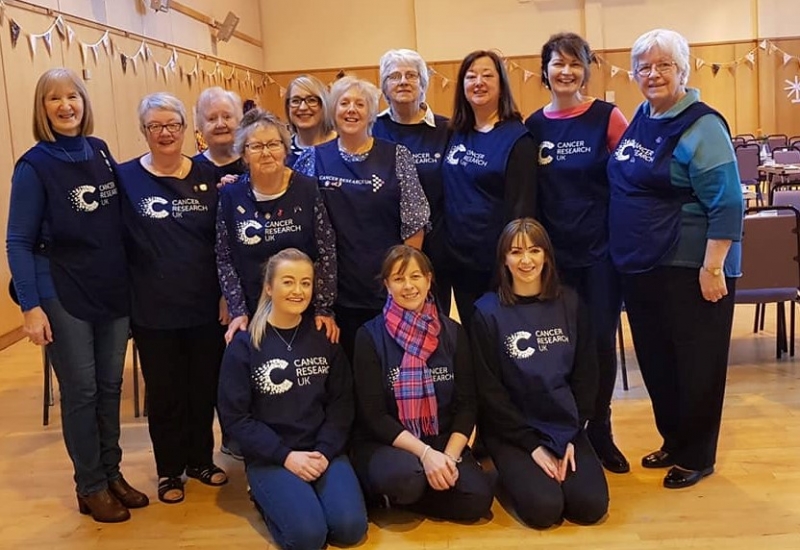 Members of the Cancer Research UK Isle of Lewis committee are still on cloud nine today, after last night’s big reveal on the total for their fundraising efforts in 2019.

About 25 committee members were at the Annual General Meeting at Western Isles Hospital last night (Wednesday 12 February) to hear the announcement that £78,766 had been raised in Lewis and Harris to fund cancer research.

The total is down on last year’s record, but still well in excess of the previous annual average, which used to be between £60k and £65k every year, according to branch chair Amy Macaulay.

Amy said: “Last year was exceptional, but this year is still fantastic. We worked hard on our events and held some that were new and different, including two events in Harris for the first time.”

The Harris events were Here Come the Hearachs, a ladies’ lunch at Talla na Mara in October, following on the successful formula of the Lewis Ladies’ Lunch which is a regular fixture in the Stornoway calendar.

Also new were a sponsored Postman’s Walk in Harris and a new sponsored four-legged walk in Stornoway, Hounds in the Grounds, which brought dog-walkers out for the cause.

Still the most successful fundraiser of the year was the annual house-to-house collection in August, which brought in £17,102.

Amy said: “People’s generosity is not diminishing. The topic of cancer is now so close to so many people and that is coming through in the amount they are giving. Research into cancer is so important and people feel they want to do their bit.

“We try to have different kinds of events to cover the island, bring in all age groups and attract all kinds of people.”

The committee has already started their 2020 fundraising, with three events in the first six weeks of the year, including joining the island’s other cancer charities on World Cancer Day on 4 February, for a sponsored walk with candles to symbolise both remembrance and hope.

The committee and supporters are pictured at the soup and pudding lunch in the M A Macleod Memorial Hall on 1 February, which raised over £1,000.