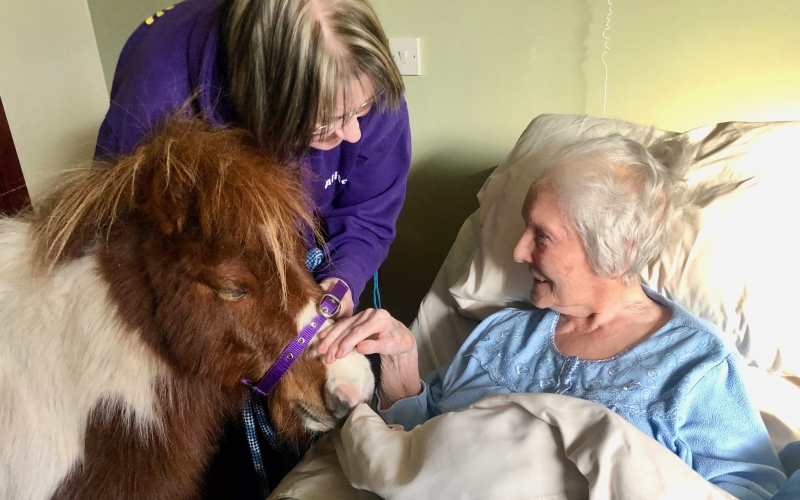 The miniature Shetland ponies are therapy horses in training, based in the Western Isles and learning their trade through visits to care homes and individuals with care needs.

And based on the smiles at Blar Buidhe, which is operated by HC-One, they were a big hit with residents and staff alike.

Care manager Donald McIntosh said: “Our activities co-ordinator is always looking for new things to do and she came up with this idea. A lot of residents had animals or pets in their past lives, so we want to keep them having that enjoyment in their lives where we can.”

The ponies are the latest therapy animals to work their magic at Blar Buidhe, which already has a pair of resident cats, sisters called Daisy and Dolly, who have lived there since they were kittens. Their job is to spread their affection around the laps, beds and welcoming hands of as many residents as possible.

Working alongside them is therapy dog Garry, who belongs to deputy manager Sharon Foster and comes to work with her each day. He’s just an apprentice, but is already receiving plenty of fuss and treats as he bustles in and out of the residents’ rooms.

The two ponies joined the flock for just over an hour yesterday, visiting every one of the 38 residents, either in the lounges or in their own rooms. They took the stairs to go upstairs but were persuaded into the lift on the way down, having lit up the rooms with their presence.

Donald said: “Our staff absolutely loved it and were delighted to see how much pleasure the residents got from the visit. It was even more effective than I thought it would be and we had some residents who respond very little to other activities, but who just lit up when the ponies came in.

“Some residents in particular really enjoy the company of animals and love to pick up and carry around the cats. But the ponies were so different and unusual that it obviously did trigger memories and feelings for some patients with dementia, perhaps even more than human contact does.”

It’s hoped that the ponies will return for future visits, but in the meantime Garry, Dolly and Daisy are keeping up the good work and spreading as much animal affection as can be fitted into the day.

(For clarification following reader comments, the ponies were visiting Blar Buidhe and are not a permanent part of the set-up at the home.)