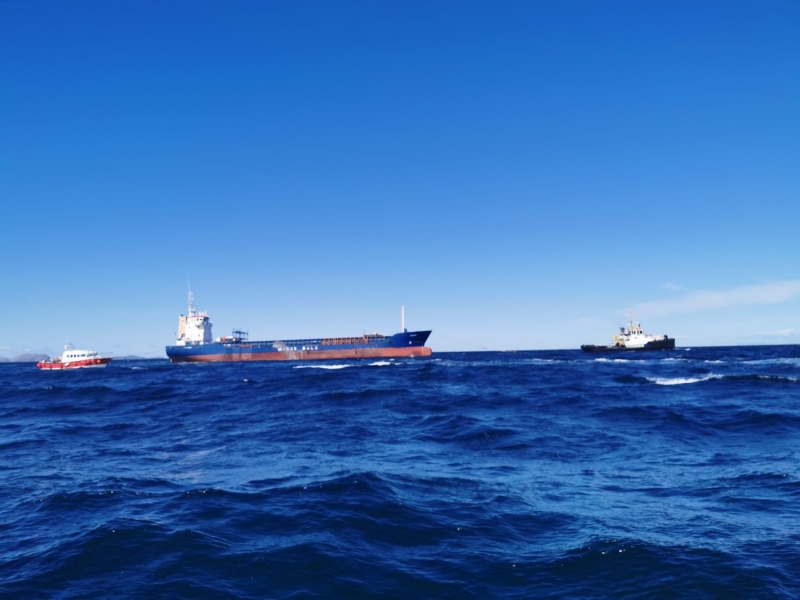 A massive effort to empty, patch and tow the wrecked cargo ship MV Kaami away from rocks in the middle of the Minch has been hailed a success by all concerned.

The Kaami grounded six weeks ago, on 23 March, during high seas and storm winds on rocks known as Eugenie Rocks, between Skye and the Isle of Lewis. Salvors Resolve were appointed to manage the salvage operation, including the removal of a full cargo over several weeks.

On Monday (4 May) the Kaami was successfully refloated on a rising tide and her stability and integrity thoroughly checked before towing. She was then towed to dry dock in Loch Kishorn over a 14-hour journey, using a fleet of tugs and support vessels. Overflights by HM Coastguard’s fixed wing aircraft showed no signs of pollution.

The Secretary of State’s Representative for Maritime Salvage and Intervention (SoSRep) Stephan Hennig, who oversaw the operation, said: “This has been a hugely successful operation and I want to thank all of those whose efforts over the past six weeks have contributed to the safe re-floating of the vessel.

“The operation hasn’t been without challenges. The weather has been against us at times and the restrictions in place due to the Covid-19 pandemic have meant we’ve had to adapt the way we work, but the determination of everyone involved has meant we have been able to remove this vessel without any long-lasting environmental damage.”

Among those contributing to the team effort, Lewis and Harris businesses were co-ordinated by Stornoway Shipping Services (SSS). Spokesman Alastair Macarthur said: “Once again the people involved through us haven’t let us down and there has been some financial benefit to the islands because of this operation.

“From our side everything went extremely well – no-one was lost or injured and there was no lasting impact on the environment from the salvage. The operation this week happened sooner than expected – we were planning forward to a tow which would have taken place today (Thursday) but in the event the refloat and tow was very quick.

“It’s fortunate that it came to an end just as the situation with Coronavirus was escalating in Skye, since with the salvage team based in Portree it could have been held back still further if the final moves had not been made on Monday.”

The 90-metre cargo vessel is now docked and salvors are demobilising equipment and vessels.  After the dock gate is shut and the dock pumped dry, work will commence on scrapping and recycling the vessel.

Alastair Macarthur said: “There are some salvage personnel who still need to return to their respective offices in locations including the USA, South Africa and the Netherlands as well as across the UK. The only problem we are then left with is the return of personal effects to the eight mariners who were airlifted from the vessel on the night of the wreck.

“We returned personal effects retrieved from the grounded vessel, including clothing, using an international carrier service. At the moment the luggage is stuck in St Petersburg, where the authorities are refusing to forward it to the company’s business centre in Kaliningrad. DHL is being left with no options, so it may be sent back to the UK for disposal.”

The grounding of the Bahamas-registered vessel is under investigation by the Marine Accident Investigation Branch.

Picture shows Kaami under tow by Multratug 3 on Monday, with the support vessel Hirta, operated by Kilda Cruises, in support (MCA).