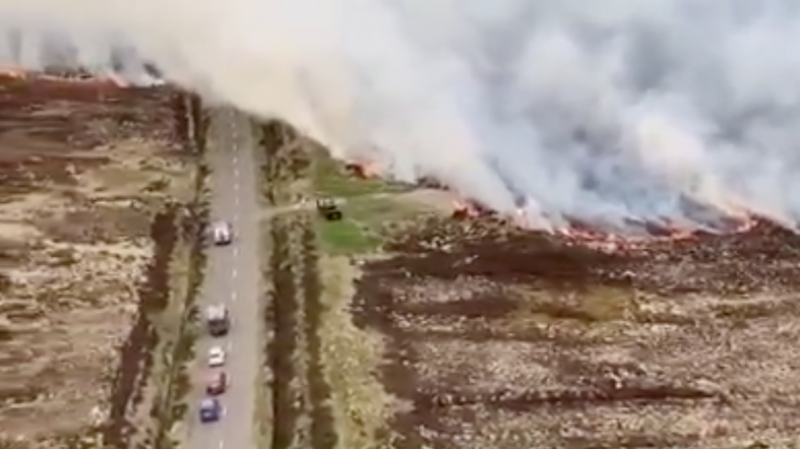 The head of Western Isles fire services has hailed the ‘unbelievable efforts’ of retained firefighters, after a 12-hour shift of back-to-back emergencies yesterday (Thursday 7 May).

But Scottish Fire and Rescue Service’s group manager Gavin Hammond has also pleaded with islanders to show restraint with using fire in their crofts and gardens, regardless of how safe they may consider their situation to be.

Fire crews from Stornoway and Shawbost, especially, spent the day dashing from one emergency to another, as back garden fires got out of control in Ness, Carloway and Point.

At the largest incident, in Point, calls from residents alerted SFRS to a developing emergency in Shulishader at 2.30pm, where a grass fire lit at the shore end of a croft was running out of control.

By 4pm 28 firefighters and two officers, with five appliances brought from Stornoway, Ness, Shawbost and Great Bernera, were battling flames over a kilometre-long fire front on moorland at Shulishader. 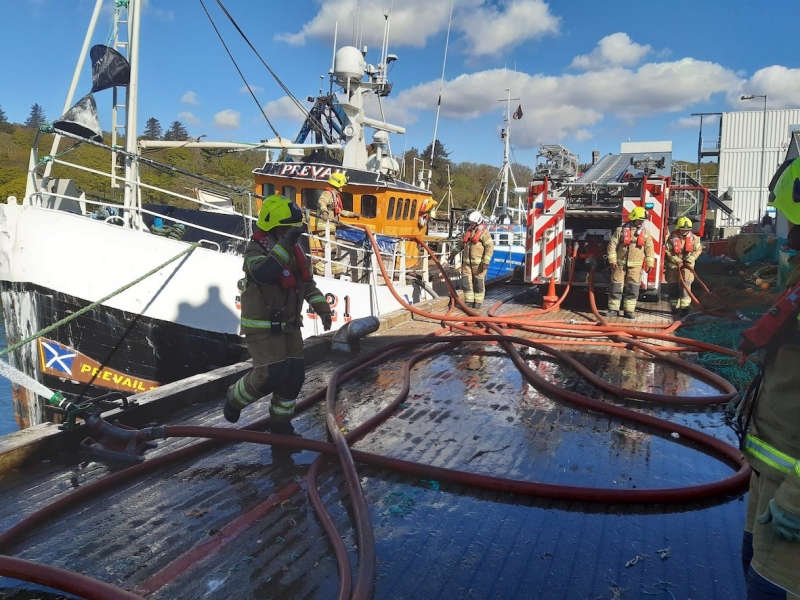 At the height of the fire they were fighting on four fronts, with brisk winds whipping around in all directions, driving the flames across tinder dry grass and heather with lightning speed.

Gavin Hammond said today (Friday): “This fire appears to have been started well away from property, but in the dry, windy conditions it rapidly spread over neighbouring land.

“Because of the number of houses in the area, there was a significant risk to people and property, as well as to poles supporting overhead power lines.

“Residents were advised to leave their homes and seek shelter in a safer location while our firefighters used beaters, hoses and breathing apparatus to battle the fast-moving fire front in dangerous conditions, with choking smoke and rough ground underfoot.”

Police closed the Point road for several hours as the fire leapt the road at Shulishader. Meanwhile SSE were asked to shut off the power supply to protect firefighters working nearby.

The road eventually re-opened under a police convoy system after 6pm and power was restored at 7pm. After damping down hotspots and making sure all was safe the last crews left for Great Bernera at 8.30pm and for Stornoway at 9pm.

It was the end of a day which had started at 9am for one of Stornoway’s fire crews, with a call to Stornoway harbour, to help pump out the fishing vessel Prevail, which was taking on water at the quayside.

The crew went from there directly to Leurbost, where a fire had started in moorland behind the North Lochs community centre. Three appliances from Stornoway, Shawbost and Great Bernera brought 15 firefighters to that location as the fire spread rapidly to threaten homes.

Other crews were meanwhile called to Carloway and Ness, and the Point call came in while some crews were still damping down from earlier calls.

Gavin Hammond said: “After the kind of dry weather we have had, these fires spread extremely rapidly, putting property and lives in extreme danger. We have to continuously change and react to ensure that we are preventing the spread.

“The focus with any wildfire is always to protect lives, property and animals first and then to concentrate on getting the fire under control. Mixed in with this is the safety of our firefighters themselves, who are putting themselves in the way of harm to do their job.

“Yesterday our Lewis teams were pinging from job to job for 12 hours – the Shawbost crew didn’t even get a break between calls. The time and effort our firefighters put in yesterday, working in very difficult conditions for extended periods, is unbelievable. I am hugely proud of them.”

Group manager Hammond also had a message for householders. He said: “With people having to stay at home more there is bound to be increased activity in the garden and croft. But where fire is concerned there is always the risk, regardless of how safe you think you are, that it will get out of control.

“We ask that you don’t have outdoor fires, especially after such a protracted dry spell. If you must have a fire, choose a still, damp day, use a metal container and light it on hard-standing away from buildings and people.

“If you can’t meet all those conditions, I would implore you not to light fires. It poses a significant risk to yourself, your neighbours, property and the safety of our teams, who are already under stress in the current conditions.”