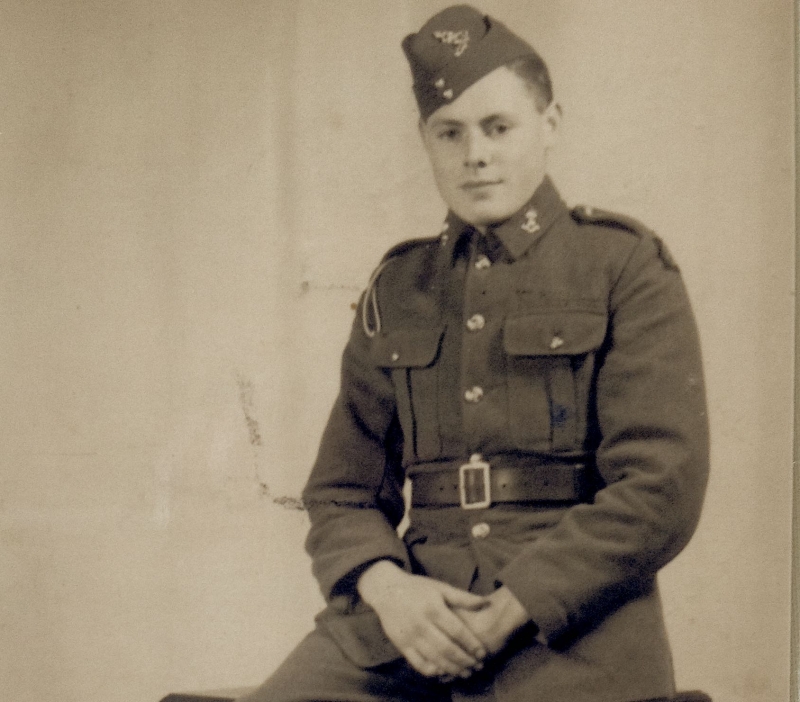 Amid the growing number of remembrance events about St Valéry-en-Caux taking place in the Western Isles, here's a chance to share the memories of John Macaulay, (Iain Tearlaich), Breasclete and Laxdale (photographed).  He was captured at St Valery and was later interviewed by the BBC about some of his experiences. These details were supplied by Mairi Heenan and Iain Macaulay (the daughter and son of John).

"I was from Breasclete and joined the Terriers (Territorial Army) as there was a Battery on the Westside. We were sentry guards, across from the Town Hall. As a sentry you were not supposed to speak to anyone, you were to ensure that no one came in or out of the area. We did some training in Aldershot.

War was declared on 3rd September 1939, I was 19 years old. I can’t remember the day I left to go to war, but the day before that I went to Breasclete to say goodbye to my parents and I told them I would be back on leave very soon. It took five years before I got back to Breasclete.

We were sent to Newcastle, then went to France in 1940. After we joined up, we thought our Navy and Army will overcome them, but they showed us that was not the case. We had an anti-tank gun that   wouldn’t even make a dent in their tanks. We just had to retreat and to dig a trench, the next day we had to retreat further and dig another trench. We knew we were not going to win.

We had gone to St Valéry to get back to Britain, but that was not to be.  They told us to head to Dunkirk and that we would be homeward bound. We were moving up a large slope in Fécamp, the Germans were on the inside of us, instead of being on the outside of us.

They fired at the truck in front and it went up in flames, we lost two of the men there. The next day we were walking on the pavement with our boots tied on our backs so that we would not make a noise. A torch shone on us it was a German. He whistled to the others. We had to join the march of prisoners marching to Germany.

Going through Holland we put our name and address on a piece of paper and gave the people the note as we passed through Holland. The note made its way to the Red Cross and they notified my parents I was alive.

When we went to Holland we were put in barges – coal barges. We were crammed in standing and they closed the hatch. We were running out of air and banged on the top of the barge saying someone was ill. We would lift one person up to the hatch to ensure it was left open. You could hardly draw breath.  We marched from there to Stalag 8b - that was my main camp. We were hungry and tired.

In Holland the Dutch people tried to give us food but the Germans would not let them. But they threw things like bits of bread and cheese, pack of cigarettes. We were thirsty. They left buckets of water for us but the Guards would kick the buckets on the way past. When we got to Stalag 8b we were so thirsty, the first thing we did was put our head and face under the tap. There were taps in the barrack. We needed water. You can survive a while without food but not without water. If you are hungry you will sleep, if you are thirsty you wouldn’t.

During our time on the March to Stalag 8b we tried to escape twice. One time we fell behind the other prisoners and then travelled at night and slept through the day. My cousin Neil MacLeod had a small Bible and I used to read it, it would pass the time through the days, then I would fall asleep, only to be woken up by the planes passing by. We were going through a village at night and a German shone a torch on us and whistled and a dozen soldiers appeared from a house across the road and we were captured.

Another time we were taken into a barn with guards. Then about 200 of our own men came in as prisoners. Neil MacLeod, Breasclete and  Peter MacNeil ,Carloway and I decided to try again to escape. It was autumn and the oats were ready to harvest, we hid in the oat field till the march passed by. Then we hid in what we thought was a barn. It was a brick factory, some of it was underground. A little French boy came around and we signed to him we were hungry; he brought us 3 pieces of bread. Then his father came and we tried to talk to him. He gave us civvies and we put them on, on top of the battle dress.

We were in the woods walking at night and hiding through the day. One morning there was a farmer nearby and we approached. He gave us a loaf of bread between us then he called us back. We thought he was going to offer more food. I was the first to come out of the wood and the German guards were waiting with rifles.  Neil and Peter then came out with their arms raised. That was our last attempt at escape.

The Camp at Stalag 8b was just dreadful. The thing we all missed most was food – always food.  I used to send a letter home and say “Acras is here” (the Gaelic word for ‘hunger’ ) As my parents didn’t know anyone called Acras, they realised I was hungry."

When Iain returned after the War he was employed for a while as an Attendant Lighthouse Keeper visiting remote islands as well as in Stornoway at Arnish Light and also as a Harris Tweed Weaver. He married Jessie Anne Maclean from Bayhead, Stornoway and they settled in Laxdale and had two children - Mairi Charlotte and Iain Macaulay.