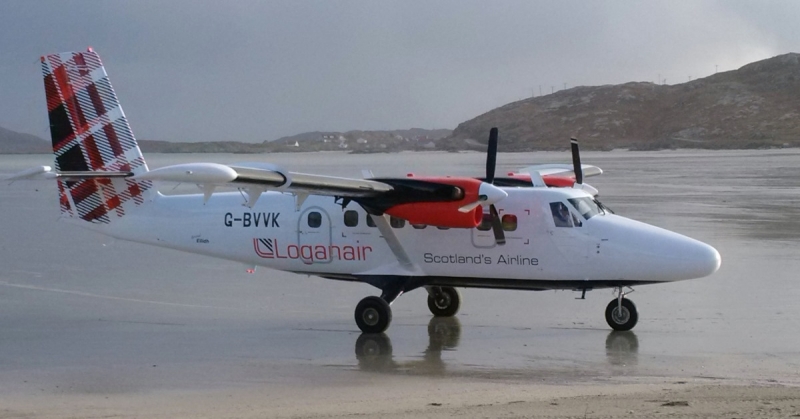 Schedules on the single daily lifeline flight between Glasgow and Barra are in disruption over the next few weeks, as Loganair wrestles with logistics during the period of ‘unlockdown’.

And there’s concern in Barra that anxieties have been unnecessarily raised by implementing a ‘dramatic’ change to the timetable without notice or consultation among islanders themselves.

On Monday (15 June) islanders learnt that their single daily service was apparently being discontinued with immediate effect, leading to an alarmed response from Councillor Donald Manford, who immediately wrote to Transport Scotland posing a series of questions.

Among them, he asked why there had been no ‘discussion, consultation, consideration or information’ ahead of the announcement that Barra and Tiree services are to be combined to facilitate re-introduction of services between Stornoway, Benbecula and mainland airports.

Loganair’s timetable shows a change to the Barra-Glasgow service to include a one-stop flight (via Tiree) on some legs of the journey, adding approximately 30 minutes to some journey times.

Responding via na h-Eileanan an Iar MSP Alasdair Allan, he said: “We have been reviewing the skeleton service on a monthly basis. As part of the last review, island stakeholders highlighted the increasing problem for NHS patients in using the ferry in the absence of the Stornoway-Inverness air service.

Loganair says that this arrangement is currently expected to be in place for three weeks, until Sunday 5 July, with Barra’s direct service to and from Glasgow reinstated on 6 July.

The airline has provided supporting figures showing that flights between Barra and Glasgow have barely been used by passengers, with an average of two passengers a day on the Glasgow-Barra flight and some flights being made with no passengers. In the first 14 days of June, 28 passengers travelled to Barra and 34 made the return trip.

Mr Matheson said: “The alternative to how we’re proceeding would have been the increasing number of NHS patients continuing to use the freight ferry to travel to Inverness for treatment until 6 July at the earliest. On balance, we took the view that the reintroduction of a Stornoway-to-Inverness service was preferable.

“Given the low number of passengers impacted by the timetable changes we did not speak to individual communities within the Western Isles.”

Councillor Manford said yesterday (Tuesday 16 June) that the response was ‘hugely important and welcome.’
But, he said: “I must add that this fear and concern could have been avoided with consultation or just information.” Cabinet secretary Michael Matheson has offered a telephone conversation with Cllr Manford to clarify any outstanding issues.

Picture shows Barra’s beach landing strip – the daily flight has departed empty of passengers on some trips during the Coronavirus lockdown (Loganair).