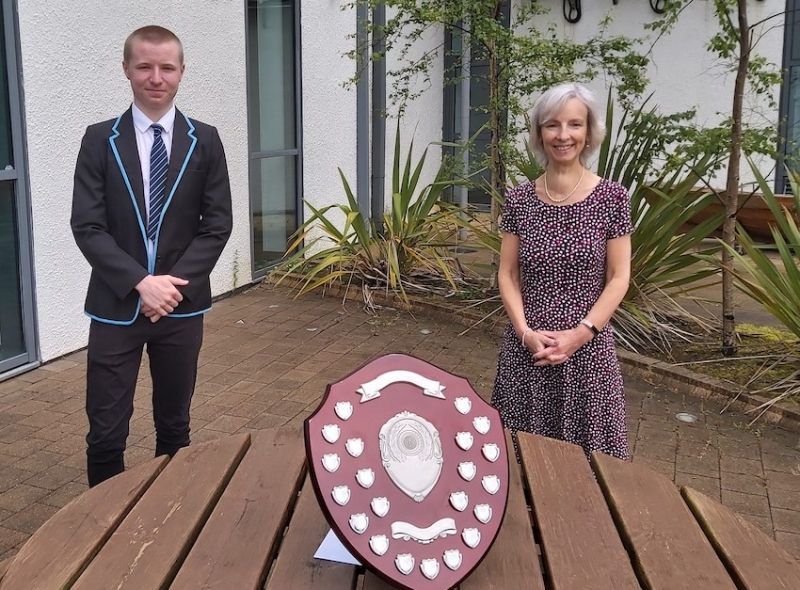 In selecting Hamish as winner of the Award for Significant Contribution to Gaelic Development, the Trustees, who select the winners of both awards, say they were delighted to learn of a number of prestigious events Hamish had participated in.  Amongst them were the Royal National Mòd, Deasbad Gàidhlig Nàiseanta nan Àrd-sgoiltean (where the Sir E Scott team won through to the Final, which was held in The Scottish Parliament Debating Chamber) and Dìleab.  He had also been invited to the RAF Centenary event at the Glasgow Concert Hall where he was asked to perform one of his own pieces of poetry, “Misneachd na Pioba”.

Trustees agreed that all these events were important in raising the profile and image of the Gaelic language at local, national and indeed international levels and they commended Hamish for taking part in them.

In terms of leadership, Trustees were again extremely happy to learn of Hamish’s leadership qualities and skills in supporting younger members of the school, and in particular, his role in the school’s piping group.  They were also impressed that, over many years he had shown much initiative and leadership qualities when asked to perform at various events both within and out with the school setting, for example participating in events held at the local war memorial to commemorate the 100th anniversary of the Iolaire disaster, the annual Remembrance Day service, local weddings and so on.
The Trustees were in agreement that Hamish has been an excellent ambassador for Gaelic, both within the school and also in the wider community and was well worthy of this year’s Donald Stewart Memorial Trust Award for Significant Contribution to Gaelic Development.

Aileen Macsween, Headteacher at Sir E Scott School said, “As a school community, we are extremely proud and delighted that Hamish Scott, S5 was chosen as the winner of this year’s Donald Stewart Memorial Trust Award for Significant Contribution to Gaelic Development.

“Hamish is a worthy winner of this award, having shown a strong interest in the Gaelic language, culture and heritage from an early age in primary right up to the present. Hamish is an excellent ambassador for Gaelic and has led by example in all the various activities and achievements he has successfully undertaken over the years and which he will undoubtedly continue to do in the years to come. Hamish is a credit to himself, his family, his school and the local community.”

Because of the restrictions currently in place, the presentations of the two awards were made in separate “Virtual Presentations” by Bernard Chisholm, Director of Education and Children’s Services at Comhairle nan Eilean Siar.

The Donald Stewart Memorial Trust was established many years ago, in memory of the former, much loved and much respected Member of Parliament for the Western Isles, for the encouragement of education in the Western Isles.  Since the formation of the Trust in the ‘90s, it has been making annual awards, for “Outstanding Achievement” to pupils in the 5th/6th year classes from across the four 6-year secondary schools in the Western Isles.

In 2019, the Trust established a new award for, “Significant Contribution to Gaelic Development” in recognition of the late Mr Stewart’s support of the Gaelic language and to link this to current developments in Gaelic, especially amongst young people, throughout the islands.   Although not a fluent Gaelic-speaker, Mr Stewart was a great supporter of the language.
Both awards are open to pupils in the 5th/6th year classes from across the four 6-year secondary schools in the Western Isles – The Nicolson Institute, Sir E Scott School, Sgoil Lionacleit and Sgoil Bhàgh a’ Chaisteil with pupils being nominated by the schools.

Margaret Martin, Chair of the Donald Stewart Memorial Trust said, “We were highly impressed with the overall quality of this year’s submissions in the two competitions.  On behalf of the Trust I congratulate Hamish and Kirsty on winning their respective awards and wish them both well in all they do in the future.  It is evident that we have a wealth of talented young people in the Western Isles.  I wish to thank the schools for their continuing support for the Donald Stewart Memorial competition, without whom, the competition would not exist.”