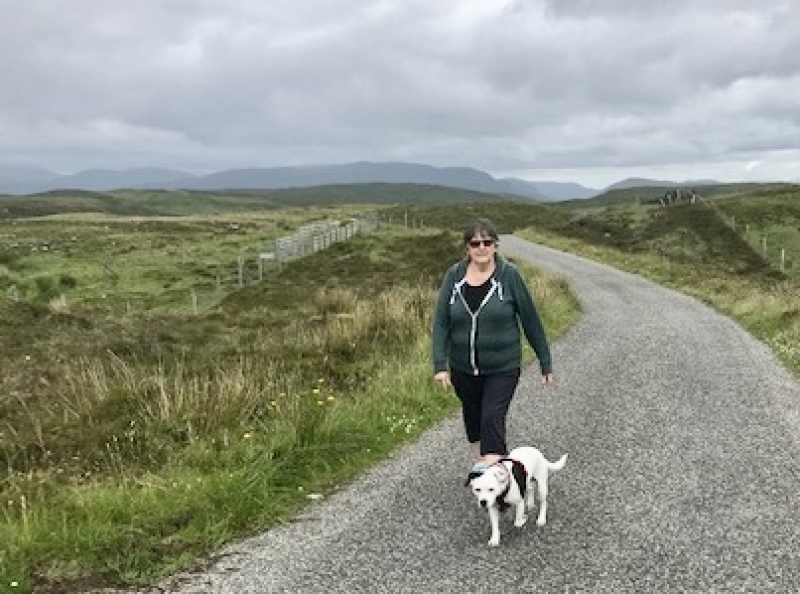 A walk a day through July

A Lochs family have set themselves the aim of walking, jogging, cycling – or crawling if necessary – to cover 155 kilometres during July, as a way of raising funds for a charity that means a lot to them all.

Sisters Pat Mackaskill and Anne Macleod are putting all their efforts – and those of their children and grandchildren – into a walk that will take them five kilometres every single day, starting from tomorrow (Wednesday 1 July), to raise funds for Chest Heart and Stroke Scotland (CHSS).

And they’re hoping that other families will join them in a massive and healthy way to get more into the coffers, so that the local group can keep supporting island people.

Pat had already been planning to walk for 30 miles to raise funds as a tribute to her mum, Agnes Frobisher of Tong, who passed away 30 years ago this year after suffering a stroke.

Sadly Pat’s dad, Eric Frobisher, also passed away after a stroke and her brother Allan, who also stayed in Tong, died at the age of 57 after suffering a heart attack.

Pat said: “We had already planned this 30-mile walk and began training in February. I have a sedentary job working for the council and it’s become more of a challenge for me taking exercise as I spend so much of my day sitting in an office.

“We were going to walk from Scaladale to the Woodlands centre. Then Covid-19 came along and changed everything, so we thought it was all off, until my daughter Joanne decided to do the 5k a day in May for Bethesda and we thought, why not 5k a day?”

Pat contacted Sonja Macleod, the local co-ordinator for CHSS in the Western Isles, and she eagerly gave the challenge her backing, adding the idea that other families could be invited to take part if they wanted to.

Pat, who stays in Gravir, her daughter Joanne in Leurbost, sons Simon (Stornoway), Alasdair and John (Gravir) and sister Anne with her daughters Mandy, Donna, Elaine and Annismarie will all be walking in their own areas, together with other members of their own families.

They’ve set up a fundraising page (https://www.justgiving.com/fundraising/pat-macaskill1)  and will be equipped with CHSS t-shirts and a determination to make this a real tribute to their parents and brother.

Pat said: “We’ve set a £1,000 target as I didn’t want to be too ambitious. I feel OK about doing it and have already done quite a few practices, walking 5k a day with my dog Murphy, who loves it, even though he isn’t keen when I set out at 7am!”

CHSS co-ordinator Sonja Macleod herself is joining in the 5k a day challenge, and anyone who wants to add their own efforts can contact her for support on 07860 271590. T-shirts available on request.

The picture shows Pat Macaskill with her dog Murphy on one of their training walks around Gravir today (Tuesday).