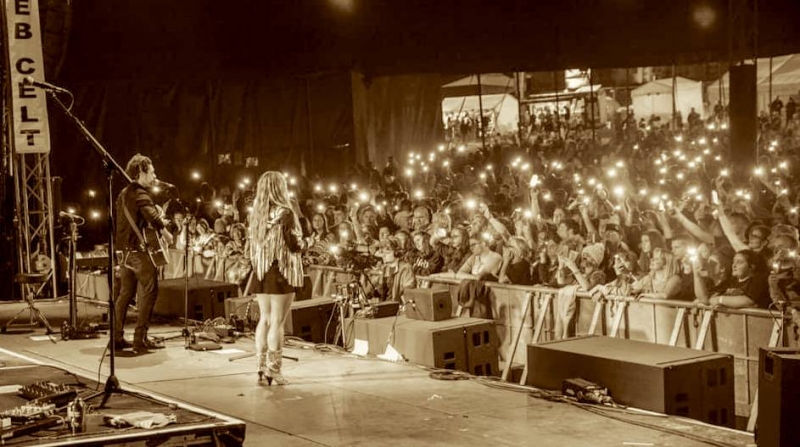 The director of the biggest annual event in the islands, Hebridean Celtic Festival, has called for music fans to unite behind a campaign to save the music industry, launched this morning (Thursday 2 July).

Caroline Maclennan has added her voice to a campaign led by a coalition of organisations including UK Music and the Concert Promoters Association. They are lobbying UK Chancellor of the Exchequer Rishi Sunak MP to include proposals for support of the industry in his summer economic update, due to be delivered on Wednesday 8 July.

A letter is to be sent to the chancellor signed by top-flight musicians including Rod Stewart, Mark Knopfler and Tom Jones, as well as HebCelt stars and local performers like Colin Macleod, the Peatbog Faeries, Julie Fowlis, KT Tunstall and Imelda May.

The letter calls for Government to respond to the crisis in the UK music industry in the same way that it has done for football and pubs. It says: “Like every part of the entertainment industry, live music has been proud to play our part in the national effort to reduce the spread of Coronavirus and keep people safe.

“But, with no end to social distancing in sight or financial support from government yet agreed, the future for concerts and festivals and the hundreds of thousands of people who work in them looks bleak.

“This sector doesn’t want to ask for government help. The promoters, festival organisers, and other employers want to be self-sufficient, as they were before lockdown. But, until these businesses can operate again, which is likely to be 2021 at the earliest, government support will be crucial to prevent mass insolvencies, and the end of this great British industry.

“Government has addressed two important British pastimes – football and pubs – and it’s now crucial that it focuses on a third, live music. For the good of the economy, the careers of emerging British artists, and the UK’s global music standing, we must ensure that a live music industry remains when the pandemic has finally passed.”

Part of the campaign is to share images of the last live music event attended on social media with the hashtag #LetTheMusicPlay. Individuals are also being asked to write to their own MP asking for them to call on the Chancellor to let the music play.

HebCelt director Caroline Maclennan would this week have been in the throes of preparation for the 25th year of the festival, with a headline bill including Texas, Seasick Steve, Tidelines, Skipinnish and Skerryvore.

Due to the Coronavirus pandemic, organisers announced on 26 March that the 25th anniversary festival was to be postponed to 2021.

But the festival and live music industry is now fighting for survival, with more cancellations possible throughout 2020 and into 2021. Today’s campaign launch saw Caroline Maclennan throwing the weight of HebCelt behind a call for action.

On social media this morning, Caroline posted a picture of the closing night of HebCelt 2019. She said: “Were you there?! What a brilliant crowd you were!

“UK live music has been one of the UK’s biggest social, cultural, and economic successes of the past decade. From world-famous festivals to ground-breaking concerts, the live music industry showcases, supports, and develops some of the best talent in the world – on and off-stage.

“As important as it is, our national and regional contribution isn’t purely cultural. Our economic impact is also significant, with live music adding £4.5bn to the British economy and supporting 210,000 jobs across the country in 2019.

“Today the live music industry stands together to call for action. Join us and share the last live show you went to using #LetTheMusicPlay”