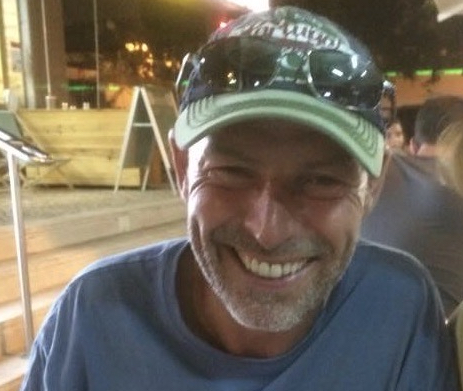 There will be an opportunity tomorrow (Friday 7 August) for residents of Tarbert to pay tribute to an islander footballer from Scalpay described as ‘one of the nicest people you’d ever meet,’ ‘always smiling’ and ‘a lovely guy’.

DJ ‘Deej’ Mackay, of Scalpay and Lagos, Portugal, passed away on Tuesday morning. His interment at Luskentyre cemetery tomorrow is to be preceded by a slow drive through Tarbert by the hearse carrying his remains, which will pass by at 12.30pm.

Harris Football Club yesterday (Wednesday) posted a tribute to the former island player on their Facebook page, and numerous friends and former schoolmates added their own memories and tributes.

The club’s statement said: “It is with tremendous sadness that we pass on the news here that DJ MacKay from Scalpay, known to everyone as Deej, passed away this week having lost his battle with cancer.

“Deej was known to many people due to his varied interests like sailing and biking, but also because he was a fantastic individual who it was always a pleasure to be in the company of. He was rarely seen without a smile on his face and brought laughter to any situation.

“Deej played full-back for Harris for many seasons, and when he moved to Glasgow also turned out for Glasgow Island where he was a much-loved and loyal team-mate. For his love of football, he also played a few games for the Harris Welfare team if he happened to be home.

“Everyone will have their favourite stories about Deej which undoubtedly will all be re-told this week and for many years to come. We will never forget the man who was quite simply one of the nicest people you’d ever meet.”

Former team-mate MJ Graham added: “He was loved by his team-mates and he absolutely adored the craic that came with being in the squad. He contributed a brilliant sense of humour, an endless stamina to engage in all sorts of shenanigans and a fear of missing out that meant he never missed out!”

Another friend wrote: “One of the best friends we all had. Always kind, caring and willing to help us all at all sorts of levels. Even when he wasn’t feeling great he reminded us of the good times. He wanted his memory to be of the good times we all had with him and so we should.”

Deej was most recently resident in Lagos, Portugal, where he worked for the international shipping company Maersk.

The picture shows Deej enjoying a reunion of Scalpachs in Lagos, Portugal in 2018 (Alex Scotch Murray).

(This article has been greatly updated since first being posted)