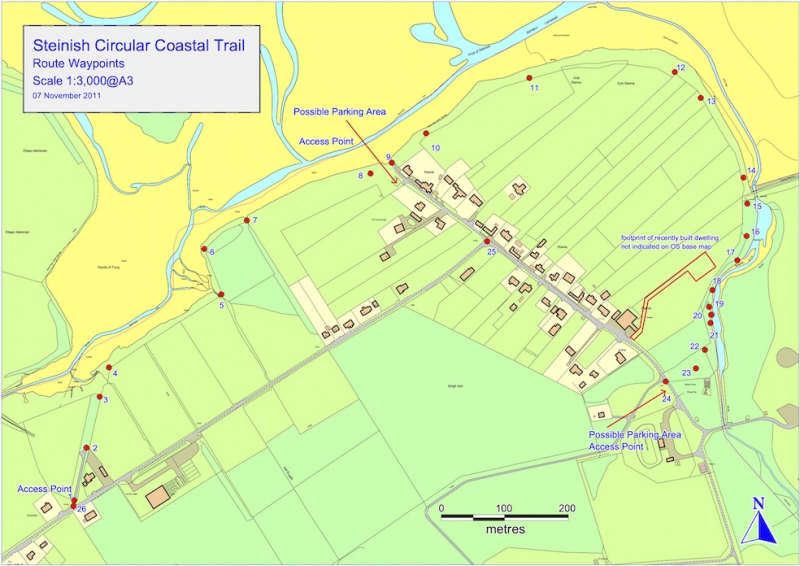 The next area to benefit from upgraded walking routes between Stornoway and Point will be Steinish, after Mossend Residents Association secured more than £42,000 from the Crown Estate Coastal Communities Fund.

Plans are at an advanced stage for the Steinish Circular Coastal Trail, with the funding now in place for the first of two phases. That section will be from Simon’s Road, starting at a location 50 yards before the entrance to the Auction Mart, and will head down towards the sea and along the coast via the newly constructed path.

An application for planning permission has been submitted for this part of the project, which will involve upgrading the existing road and path that leads off Simon’s Road, extending around the estuary, bordering a designated SSSI (Special Site of Scientific Interest) with sinking sands known locally as ‘the Cob’.

If planning permission is secured, the eventual path will be 2km long and 1.2M wide with wider areas of 1.7M for passing and resting. It will be surfaced to allow for easy wheelchair and buggy access.

Phase two of the planned work will involve extending the track around the shore side of Steinish village and up around the far side of the village, exiting near the airport.

Mossend Residents Association are “delighted” to have secured the money, confirmed by a full meeting of Comhairle nan Eilean Siar in August, and were assisted in this by Point and Sandwick Trust honorary president Angus McCormack in his capacity as local councillor.

Angus McCormack is also a North Street resident and was happy to help the Residents Association. He said: “I’m delighted that at last this project, which has been lying on the shelf for a number of years is going to go ahead.”

The area around the estuary is well known for its rich bird life and the project has received support from Scottish Natural Heritage. Arctic Tern nest in summer and other visitors include Skylark, Shelduck, Oystercatchers, Ringed Plover, migrating waders, ducks and geese. Salmon and sea trout can be found in the estuary waters.

Angus also said: “It’s a beautiful walk, actually. It is possible to walk there just now but for anybody who’s not good on their pins, it’s not good. We are trying to make it so that anyone can walk there. It’s a sea estuary so there’s a very wide variety of birds to be seen over the year and sometimes it’s very interesting to see the fish go in up the river.”

“During lockdown and our daily one hour walks around the village it became clear to residents that this path project would really be of huge benefit to not only those in the village but many people in the Stornoway area who seek a quiet coastal walk where they can appreciate the views across the sands, experience a variety of wildlife and benefit form breathing in fresh sea air.”

Angus added: “It’s a lovely walk and the opportunity to see the birds in the estuary is wonderful.”

Duncan Mackay, chair of Mossend Residents Association, warmly welcomed the development. He said the area was “really excellent” and particularly popular with dog walkers. “It’s very, very popular. It’s a lovely area; good for bird watching, dog walking, fishing and general sightseeing – although the likes of children have to be extremely careful because there is sinking sand.”

Duncan is also chair of the Fideach Angling Club, whose area covers the Steinish pool. He recalled the idea for the path being mooted “about three or four years ago” and added: “It finally came to fruition there when we got the grant. Angus put a lot of work into that. We’ve been talking about it for quite a while and the grant put the icing on the cake.”