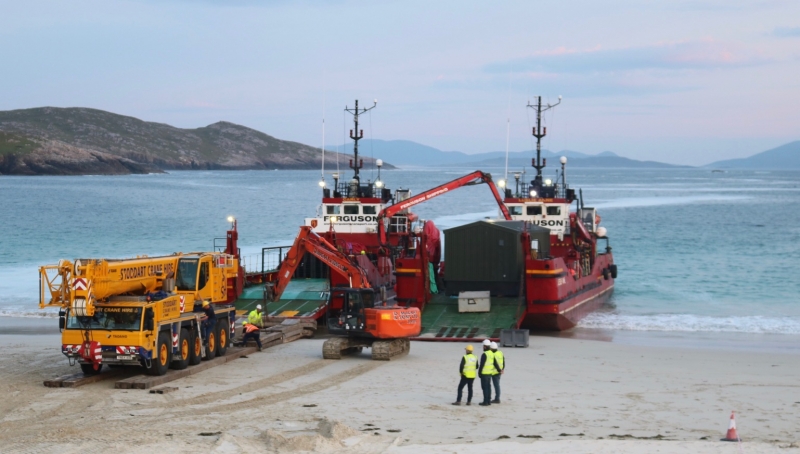 A proposed ferry run to deliver essential winter supplies of oil and gas to Bernera has been postponed again today (Tuesday 27 October) – and may not take place for some time.

Heavy swell in the Atlantic and a continuing forecast for adverse sea conditions means the vessels suited to the crossing cannot reach the west side of Lewis. Operators say it could be weeks before they can make the crossing.

The short trip from the slipway at Uigen in Uig to Valasay in Great Bernera is urgently needed to carry oil tankers and deliveries of gas for heating before winter sets in.

The solution was put in place by Comhairle nan Eilean Siar after the Bernera bridge became the subject of a weight restriction due to structural weaknesses. A ban on heavy goods vehicles crossing the bridge has affected fuel deliveries, as well as waste collection services and other deliveries. 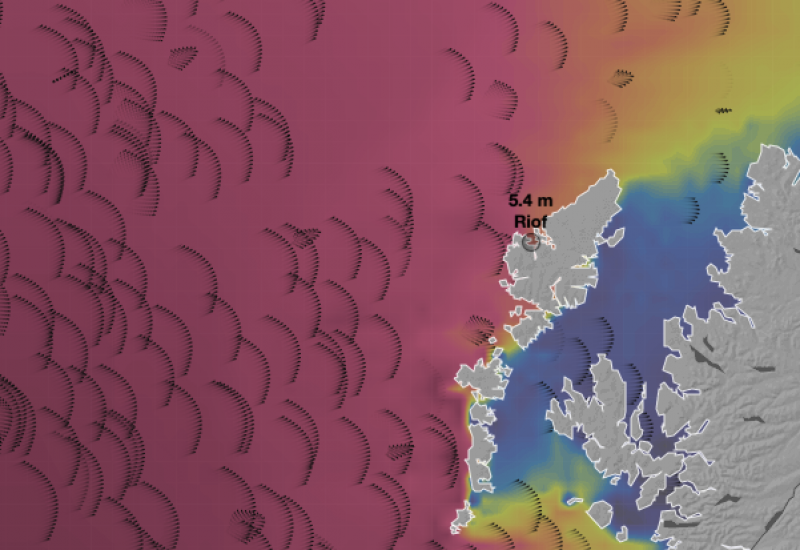 The picture shows a screenshot of the swell forecast for the Uig area tomorrow (ventusky.com)

Ferguson Transport and Shipping of Spean Bridge have been commissioned to run the ferry transport – scheduled for this Thursday (29 October), using one of their shallow-draft, roll-on-roll-off landing craft.

The vessels are often seen operating around the Western Isles and have delivered heavy equipment and vehicles for fish farms companies and Scottish Water in the recent past.

But shipping administrator Ewan Gibb said today that this week’s forecast sea conditions will not allow them to move into position for the crossing, meaning a third postponement to the crossing, and that the forecast for next week is looking little better.

He said: “It’s the wrong time of year to be doing this, to be honest. Hurricanes across the water are having their effect on us, too and if you look at the swell across the whole of the Atlantic it’s not nice just now.

“It’s unlucky that this need has arisen at this time of year. We are just going to have to assess week by week and see what mother nature has to throw at us.”

Fergusons fleet of vessels, suited to the shallow waters and slipways at each side of the crossing, can operate in significant swell height of up to two metres. The forecast for tomorrow, when the vessel would need to get in place for the proposed Thursday run, is between five and seven metres of swell.

Ewan said that the wave conditions could be prohibitive for the next three or four weeks, but that both Fergusons and the Comhairle had in mind the fact that temperatures will be dropping and that people need supplies for heating.

He said: “If we see an opening to get in there, we will take that opening because our main focus is to help local people. But really, when you look at the whole Atlantic, it doesn’t look promising.”

Comhairle nan Eilean Siar - in an official statement today - says: "Due to forecast weather conditions and sea states this week, the sea run to Bernera scheduled to take place on Thursday 29th October, will now go ahead on Thursday 5th November. The aim of the run, via sea from Uigen Slipway, Uig to Valasay Slipway, Great Bernera, is to enable the topping up of oil and gas supplies in preparation for winter, and also to test this sea route should it be necessary to deploy again at short notice."